In 1975, two men inadvertently created the most damning campaign against sharks that exists to this very day. They were director Steven Spielberg and composer John Williams, and the film they worked on together was the classic Jaws.

That film alone has managed to create a global frenzy regarding sharks and their killer instincts, with humans seemingly their favourite snack. The truth is we probably don’t even feature on the mains section of their menu.

According to research by PETA (People for the Ethical Treatment of Animals), you are more likely to die from a champagne cork accident, falling from a ladder, or being struck by lightning, than being eaten by a shark. To support that, National Geographic research states that you have a one in 218 chance of dying from a fall (quite possibly from that rogue champagne cork that hit you in the face), but a one in 3.7 million chance of being killed by a shark. 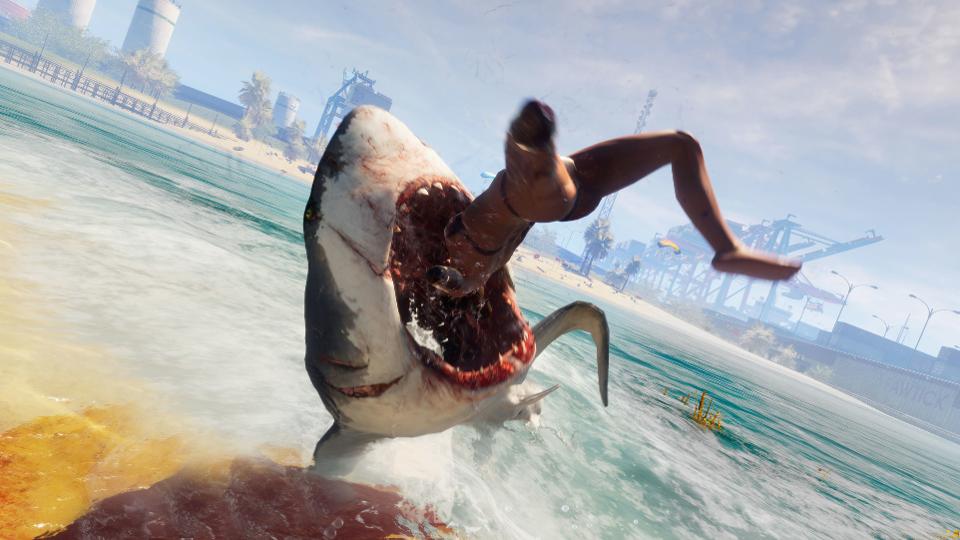 I really enjoy them in this new salt and vinegar flavour.

This game however, only strengthens these stereotypes of these majestic beasts of the sea, but at least it does so with a delicious twist – you play as one.

You play a pup shark, who narrowly escaped the clutches of an evil hunter. As the game progresses, you grow older, developing new skills, enabling you to survive in your watery world. Your ultimate challenge is it seek revenge on the notorious hunter Scaly Pete, but there’s some work to do before you get to him.

There’s something refreshing about playing a shark, in what can be best described as a third-person chomper. Your underwater environ is an intriguing playground, and is fun to fully explore. Of course there is a food chain, which you are part of for some of the larger prey, such as alligators, but many are there for your feeding pleasure. As the game doesn’t have a life bar that fills up automatically after attacks, you will have to rely on eating smaller fish around you.

Although there are educational elements to the game, make no bones about it, this is a game where you kill, or be killed. As well as the underwater world to explore, you can surface, where stupid humans can be out and about, and snacked upon if desired. In fact you’ll have to chomp on a fair few, as this increases your threat level, which when it reaches a certain point, releases the hunters on you, which is akin to the game’s boss levels.

Tripwire Interactive have done a swell job in incorporating the usual elements of a third-person shooter into this wet world. There are missions to undertake, items to be discovered, and various parts of the map to open up and explore, making it all feel remarkably familiar. What may take some getting used to is the movement of the shark. There can be a lot of thrashing going on, not only by your character, twisting and turning hunting its prey, but also by the camera keeping up. To that end, it may well be a game you occasionally dip in and of, as it were, as opposed to prolonged gaming sessions, as it could quickly cause headaches if you’re prone to such. It’s certainly a title that would most definitely cause severe sea sickness if there were a VR mode, but thankfully, that’s not available.

The upgrade and evolution system also felt a little off. Despite levelling up to level 6, we still could only upgrade our sonic ability, with all the other quite prominent upgrades (such as teeth, tail etc) remaining firmly locked.

Some of the challenges also felt a little steep. Not long into the game, we found ourselves having to take down a level 15 alligator, and it just felt completely unattainable, as our frequent death at its nashers testified to.

That said, there’s a lot of fun to be had with the game. How could there not be when you get the opportunity to leap out of the water and munch down on some humans messing about in the water. Let’s just hope one of them is that Spielberg fella and see how he likes it.

With so many games seeing you with a gun in your hand, shooting left, right and centre, Maneater offers an appealing alternative, in a wondrous watery world, that is definitely worth sinking your teeth into.