According to Oscar Wilde all art is quite useless. And on the basis of this filmed art installation, it's a sentiment that's hard to refute.

German artist and filmmaker Julian Rosefeldt has created an interesting premise by taking the manifestos from various figures throughout history, including revolutionary socialist Karl Marx, architect Bruno Taut and filmmaker Lars von Trier, and allowing their words to flow through various characters, all of which are played by the versatile Cate Blanchett, in very different settings.

Topics covered include futurism, Dadaism, pop art and performance, out of a total of thirteen.

At all times you have to remember that this is no normal film that contains conventional film techniques. In fact you don't have to realise this as the film does its job in constantly reminding you what it is throughout. So in terms of the regular rules of reviewing, it's difficult to critique. So in one sense, it breaks the rules in terms of conventional film, which art should probably do.

I love the fact that i can't tell where my hat ends and my facial hair begins!

And in terms of a work of art, it's all subjective, so it's a win win. However, those used to film in the more conventional form, with a narrative, plot, beginning, middle and end, may possibly struggle with the film's premise and its free form approach.

As a film, it is almost unwatchable. You are bombarded with words, completely unaware who said them and what context they were said, in curious surroundings. The only one constant is the appearance of Blanchett, in one guise or another.

There is every possibility that this film will only be understood by academia and those in the know, but to someone lacking the knowledge and dare it be said, intellect, the exercise feels wholly pretentious. 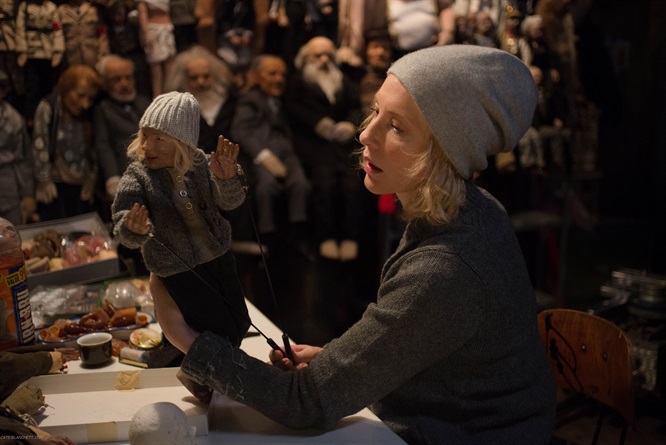 You know what? Even I can't stand how prententious you're being right now, i can't look at you.

Despite being completely unmoved by the experience, Blanchett is remarkable in all her incarnations, even if you may struggle to understand what exactly she is jabbering on about.

In all honesty, the only reason this film fails as a film and possibly succeeds as a work of art is through sheer ignorance of the material. However, it does little in the way of educating its audience, and assumed knowledge of any kind is a dangerous thing.

As far as an art project goes, Manifesto may well leave you feeling unfulfilled and even possibly scratching your head. If that's the case, then Wilde was probably onto something after all.