Bolt. Redgrave. Phelps. Ennis Hill. Thompson. Some of the biggest names to appear in the Summer Olympics over the years, but can any of them really compete with the likes of icons Mario and Sonic?

The gaming duo have been working hard, getting into shape, making sure that all their abs are pointing in the right direction for this their sixth sporting outing together, as they pack their bags for Japan’s capital.

As is the tried and tested formula with this game, you get to participate in a various amount of Olympic sports with up to eight players locally, online, or in single player story mode. 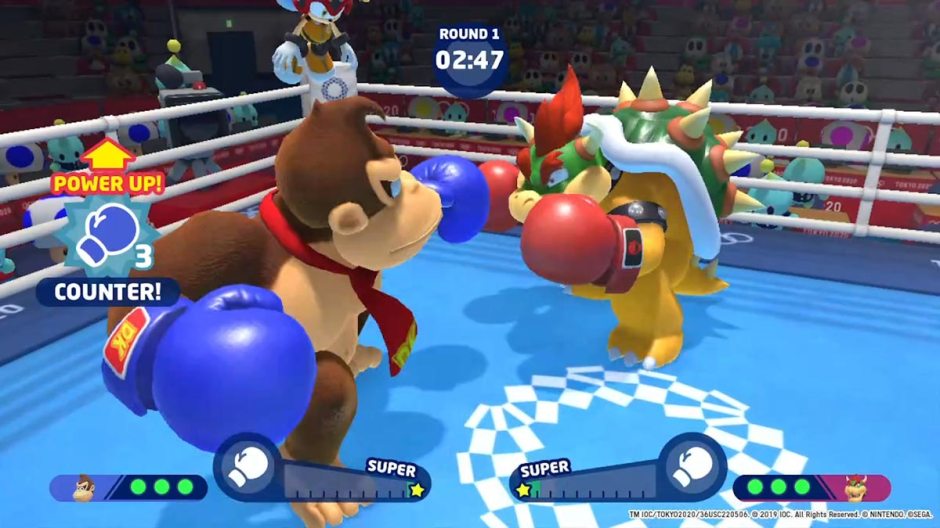 You take that back about my Diddy!!!

The story mode is simply a vehicle to introduce all the sports available one after the other. It’s quite sweet how it does it though, by introducing some old skool gaming with Mario & Sonic sucked into a retro gaming device, whereby they have to compete in ten 2D games represented in an eighties styley. It may be a bit of a head explosion for younger players, who will no doubt have no idea what the hell is going on, but for the more mature player, it will wrap your heart in a cosy, retro glow.

These games are obviously integrated with the more modern approach, as Tails and the rest of the gang attempt to save them, and of course the only way of doing that is by winning events. All in all it’s a pleasing way of doing things, only let down by the fact that the cut scenes around the games themselves soon get rather tedious in their static depiction, as well as far outstay their welcome considering the games they act as padding around, last merely seconds.

But no one buys a party game like this for the solo player, as it’s clearly multi-player where it’s at.

Where the game shines to nearly gold standard is competing with family and friends at home. There are various options to play, where you can use either the Joy-Con’s or the Pro controller. As you would expect with the Joy-Con’s, you get a bit of a work out using them; many of the events need you to have some space around you, so you can manically swing your arms around to the extent where it may look to the untrained eye that you’re having a seizure of some kind. It’s ridiculously fun to play this way, but just be prepared for some breakages; these can come by way of bones, furniture, or even relationships, so just be as prepared as you can be on all fronts. 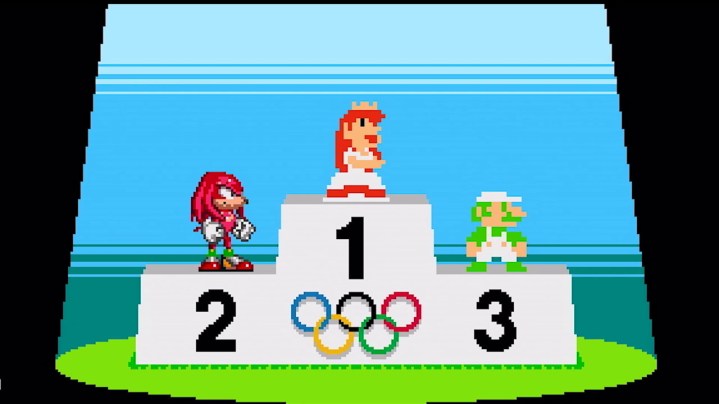 Although the retro look was commended, the budget didn't stretch to pixelated flowers.

The more ‘sedate’ way to play is with the Pro controller. It’s here that you get a heavy whiff of nostalgia (well, we hope that’s what that curious odour is) from playing, as much of it relies on good old fashioned button mashing. If you’ve ever come close to feeling the bones in your index finger from buckling under the constant stabbing motion from playing a game like Track and Field, then be prepared for a painful trip down memory lane.

There’s a huge variety of games on offer here too, some of which will become your nemesis; a few of the games that tripped us up include gymnastics, the vault and retro Judo, you will no doubt find your very own.

Some of them could even do with expanding themselves; the football game is hugely enjoyable and with a few extra bits added, could make FIFA and Konami order in extra thick sweatbands to deal with all the extreme sweating it could cause them.

It’s certainly this wide spread of events that makes the game so appealing. With over thirty events to dip in and out of, that include skateboarding, sport climbing, surfing, to the likes of equestrian, badminton and archery, there are enough disciplines here to please the most ardent of sports fans.

One aspect that didn’t make us jump up and down with joy was online; the experience was annoying and cumbersome, and for some reason, many of those that had created rooms left us waiting far too long to play, despite there being enough gamers to play.

This is primarily a party game, and with a nice crowd in, a good time will be had by all, except those sore losers of course, making this very much a big win. And just remember this at home, cheats never prosper.