When it comes to elite sports, there’s nothing quite like golf. It’s a game that rich white men folk can use as an excuse to get away from the monotony of their family lives, as well as the lower class riff raff, by paying an extortionate amount on membership to a club, that’s just a glorified park with holes, to hit a ball around.

Thankfully for gamers, the video game versions of the sport have always been far more accessible on every level. And arguably far more fun to play too.

And when he’s not busy saving Princess Peach, Nintendo mascot Mario likes to spend much of his down time getting sporty, with golf one of his favourite pastimes. It’s actually been a while since he dusted off his clubs, as Mario Golf: World Tour for the 3DS was seven years ago now.

But now he’s back, clubs in hand, ready to take his game to the Switch for the very first time. 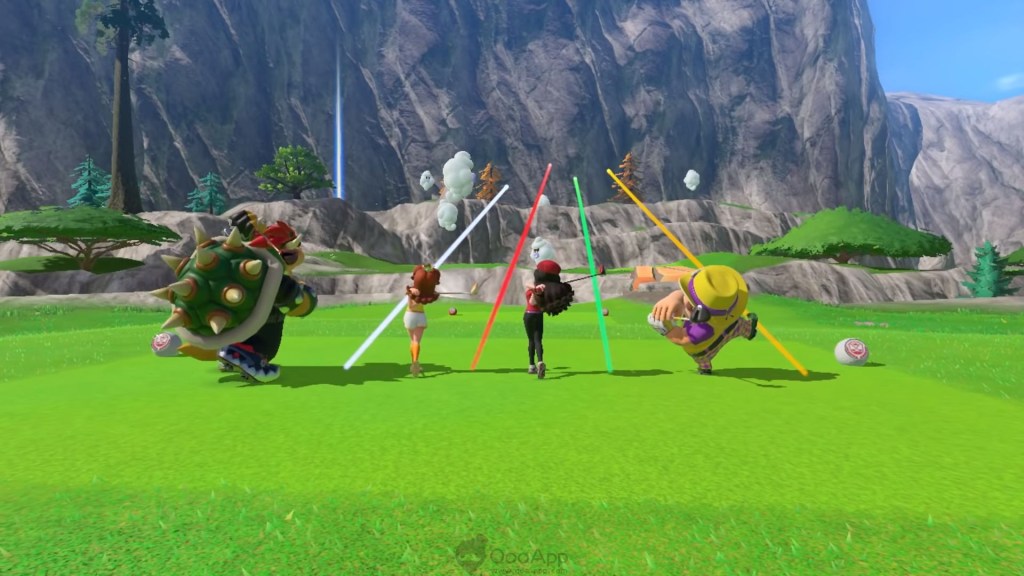 I'm sorry guys but I never doubted that i could pee the furthest. ever.

It’s not long into the game before you hit its first stumbling block. If you fancy jumping straight in and taking on a course or two, you can’t. These can only be accessed as you play through the single player Golf Adventure mode; although it’s been sold as an RPG gaming style, with a central hub and the ability to level up experience points and gaming techniques such as power and spin, the whole mode is nothing more than a glorified tutorial.

Over the course of playing it, you unlock the courses for general play. The thing is, despite its name, this mode is far from adventurous. In fact at times, it can be as infuriating as hell.

The main issue is that many of the ‘levels’ as it were, have to be completed a certain way, such as Speed Golf, which gives you a time limit in which to complete the course. And it’s this new speedy element that the game embraces, sadly. It shouldn’t be a surprise, as there’s a clue in the game’s title, but still.

First off, you always have to play a speed round on a course you’ve never played before, as it’s locked in general play until you’ve passed this section. So there’s no opportunity to practice and familiarise yourself with the course, you’re just simply thrown in.

And it’s this notion of being forced to play Speed Golf that is disappointing. Golf by definition, is a leisurely pastime. It’s a game that is supposed to be enjoyed, not endured. You take your time going around the course, think about the shot you want to play and where you want to hit it. Speed Golf is like playing golf with a gun pointed at your head, pressurising you into just hitting that goddamn ball, or the basket of cute kitties get it. So really, it isn’t golf at all.

It reminded us of the recent FIFA titles, where they have included Volta, which is 5-A-Side with a few variations. It’s not FIFA, but if gamers want something smaller and more tricksy, it’s there for them. After reviewing it, we confessed to not liking it, but that’s OK, as it doesn’t get in the way of the overall FIFA experience. 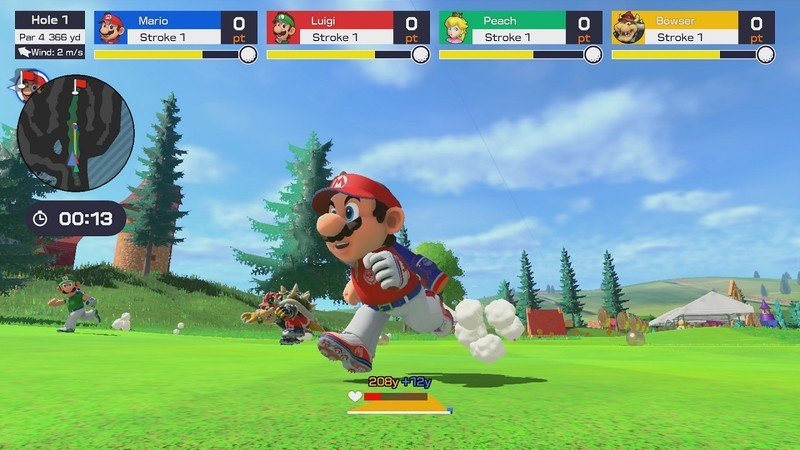 Unfortunately for this golf title, Speed Golf is the most predominant mode, and it can’t be avoided, particularly in so called Golf Adventure. So much so that two of the elements you have to increase your level of include running and stamina. For a golf game. That’s right, the one where you have to hit the tiny ball. And learn to develop the speed of Usain Bolt apparently.

It wouldn’t be so bad if it was like Volta in that it was simply there if you fancied having a go, but it’s so intrinsic to the title as a whole, there’s no real way of avoiding it.

There are other elements to Golf Adventure, but sadly none of them are that appealing. We managed to level up our Mii character to 81, which sounds a lot, but it doesn’t affect how you play noticeably. And when we defeated the end of boss baddie, and of course there’s a baddie in a golf game, the overriding feeling is that of sheer relief that it’s all over, and nothing more, as you ask with hope in your eyes if you managed to save the kitties. No, no you did not.

If you manage to persevere with the mode, at least you would have unlocked all the courses – all six of them – to play at your own speed. However, it’s a very soulless experience; even when you go around the course you’re greeted with the same smattering of polite clapping, whichever shot you play. There are no achievements either, or ability to level up other characters you might play as.

Another curiosity is that of a missing action replay. This is standard feature not only of golf titles, but most sports titles too. Not so here there. If you think you’ve taken the best shot of your life, well soak it in fast, as you won’t get the opportunity to see it again. Not even sinking the final shot has an action replay; during the agonizing Golf Adventure, the final hole was so crowded, that we didn’t even see our ball go in, as our view was obscured by another character. Which kind of begs the question: what’s the point in playing?

It has to be said that it’s not exactly the prettiest of games to look at either. Sure it’s on the Switch, and Switch owners don’t expect really fancy looking games, but it just feels that the developers didn’t even try. There’s every chance that you’ve played prettier golfing games on your mobile device than this, which is a shame.

It’s ironic then that the game gets its physical golf mechanics spot on. Everything from the various clubs you can use, to the wide variety of shots you can take, seem at odds for a game that forces you to run around like a lunatic for the majority of the time.

It’s saving grace may well be multiplayer, where even Speed Golf would be even bearable, as you can at least have a few lols with friends along the way.

And for anyone who can remember getting giddy at the thought of pretending to have a tennis racket in your hand for Wii Sports, this game also supports motion controls using the joy-cons. Don’t get too excited however, especially if you’re left-handed, as despite all our attempts, the motion of swinging the club very rarely matched that of on screen.

If you’re after a more relaxed arcade-feel golf game, then you’re still better off with something like the delightful Everybody’s Golf for the PS4, or the supremely playable Mario Golf World Tour on the 3DS that has sixteen course in total available – albeit six of those are extra downloadable content - either way there’s still more than the disappointing six here.

Many have stated that there’s every chance this title will get better, with extra supposedly free content coming down the road, and boy does it need it. Not so great news if you bought the game from day one however.

So Mario Golf: Super Rush is a golfing game, but not as we know it. There’s certainly no harm in tinkering with the elements of the game play, but when they dominate throughout as they do here, it doesn’t feel terribly sporting. Or fun for that matter.