at the London 2012 Olympic Games

The Olympic Games are just around the corner for old London Town, and it's still getting difficult to summon up any excitement for them. That would change of course, if Mario and Sonic were to compete in the real games, but that, sadly, is unlikely to happen.

So instead, their attempts at taking part in this massive sportathon have been condensed down for the playing pleasure on the 3DS.

On the back of the box it declares "over 50 exhilarating events", which sounds like a whole lot of gaming to be had. The reality is, is that there is and there isn't.

For the most part, this title is an Olympic themed WarioWare title; many of the games are nothing more than micro games that feel like they're over before they've even started. That's not to say they're not fun however. A large majority of the events are incredibly addictive.

Some of their magnetic charm may be down to some impressive ingenuity on the part of the developers; they have managed to utilise almost every part of the 3DS to get the most out of the games. About the only thing that isn't used, rather disappointingly, are its cameras. Still, this is a minor quibble considering all the work they've put in elsewhere.

Blowing into the microphone for instance can do anything from blow a wind into your sailing vessel's sails, to make your swimmer breathe when their head is out of the water. Moving the 3DS around helps out with double trap event (clay pigeon shooting in other words), where you have to move the screen over the targets before shooting. And then there is your myriad of variations on button bashing. Some of the control methods don't work all of the time, but the amount of thought that has gone into them is pretty impressive.

Because of the brevity of many of the games, it would have been great if there was a practice area where you could hone your skills for every event. This would certainly help in the story mode, where some events comprise of more than one element  like the triathlon for example. So if you are let down by one discipline your weak at, it can bring your points down for the event overall. 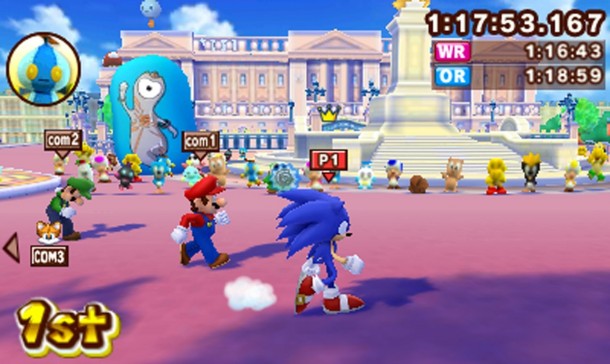 Oh my, who let Paula Radcliffe into this event? Yoshi is better house trained than she is!!!!

Talking of the story mode, a surprising amount of TLC has gone into it, possibly a little too much. The gist of the action is that Dr Eggman and Bowser are truly miffed at not being invited to participate in the games. So being the sore losers that they are, they decide that if they can't take part, no-one can. They build a machine that creates vast amounts of fog, which of course the capital was famous for, with its pea-soup thickness, back in the day. This fog causes major havoc and prevents the games from taking part. Somewhat curiously though, Mario, Sonic and the rest of the gang, have to take part in games that feature in the Olympics to clear the fog away. So no, it makes no sense at all, but its all good fun nonetheless.

The main problem is, for those with little patience, is the fact these well made cut-scenes are about a hundred times longer than the games they bookend. But if you're not a fan of them, you are given the option to skip  which, incidentally, isn't a game that features here.

Although many of the games are incredibly short, there is a huge amount of variety; it could have easily simply focused on track and field events, but the game really does do its best to include a diverse number of the events you'll find at the big O, including gymnastics, swimming, boating and shooting.

Many of the games may be easy to pick up from the off, but just as many are harder to master. Going for gold across all events will be a test for any serious gamer.

Unlike its home console cousin, the 3DS doesn't have a huge range of mini-game titles worth picking up. Add to that fact that a WarioWare title has yet to grace the 3DS, then this game offers the best collection of micro-games for the system. And to top it all, you get the likes of Sonic and Mario taking part too. And it's this great combination that makes this game a winner of Olympic proportions.