The beautiful game. It’s going through a bit of a transition, as far as gaming is concerned. First we had the complete disintegration of what used to be such a fine footie franchise PES, which has withered away dramatically since taking on a free-to-play approach to its business model, which ironically enough, is bringing them no business at all now.

And then you have EA’s FIFA, which has basically dominated the football gaming space since its inception. But with the football organisation FIFA allegedly asking for bagfuls of millions – which, let’s face it, they have previous with – EA hare letting the license go and producing a non FIFA game. Which, as it turns out, is leading to FIFA themselves to produce their own game. So it’s going to be interesting to see who play s it out of the park, if any.

This could be the perfect time then, for someone else to sweep down the wings and score a sensational winner against the odds. Could it be Mario? 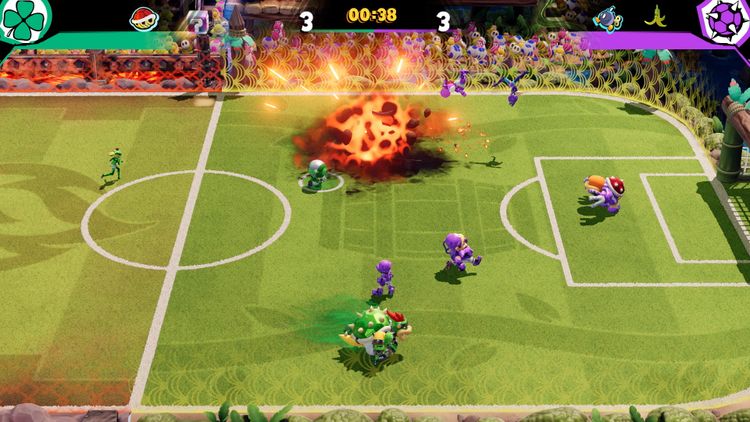 With climate change causing random fireballs on the pitch, it was a whole other ball game.

This is the third football title for Mario and his chums, joining the ever growing list of sports he enjoys.

The first obvious statement is, this isn’t FIFA. Obviously Mario hasn’t signed for PSG, which is a surprise considering how much of their cash they’ve been throwing around of late. It’s a five-a-side structure, but that’s about all it has in common with the real game.

You pick your team of four, with the goalie chosen for you. It’s the type of game that you shouldn’t probably skip the tutorial, as there is a lot to remember. There’s super charged tackling for instance, items to use, power up shots at goal etc.

The main up shot from going through the tutorial is, this is no pass-n-shoot game. Therefore it’s not exactly a pick up and play type of title.

You then have the choice of either a quick match, or enter a tournament. And that’s it. Yet another example so it seems of Ninty releasing a sports title that is definitely on the light side at launch. It’s peculiar to think that it’s ok to add various dlc throughout the game’s life cycle, but with so much choice for gamers, many have moved on in the first few months, never to go back to a title again. We know, because we do just that. And in some cases, even sooner, as we did here. 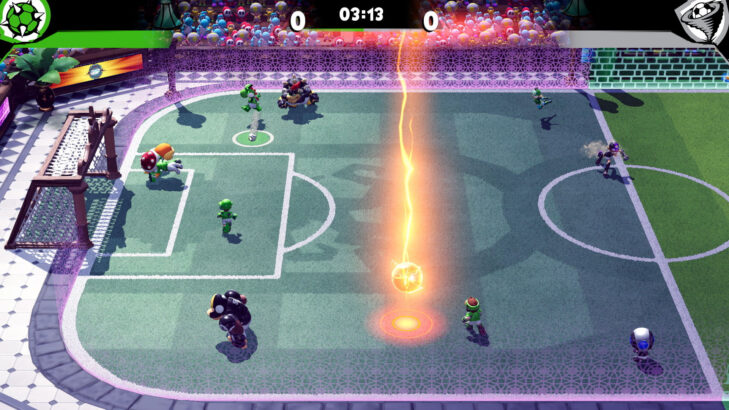 You've heard of my hand right? Well, this is the upgrade, the ball of God...

There are a number of reasons for not getting on with this game, the main one being the difficulty level, or more to the point, the absence of one. After finishing the tutorial we jumped into a game against an opponent that quite simply wiped the floor with us. No problems, we’ll just change the difficult level until we get the hang of...oh wait, there isn’t one.

This seems an odd oversight for a Nintendo sports game, as every other one we’re aware of does allow you to change the difficulty settings. We perservered through a few other games, and despite finally managing to score the odd goal, still ended up being trounced.

One of the other reasons the game didn’t grab us, was that it’s very busy on screen. There are items that can be picked up and used, littered all over the pitch, with characters lighting up from some kind of lightning ball, with characters keen to take you down. And the fact that the ball is so small it can hardly be seen doesn’t help matters.

It actually reminded of us more of an ice hockey game rather than football; with its ultra fast pace, and the ball just flying everywhere.

And to add insult to injury, there is no half time, with no switching sides at any point, as well as not being able to use any substitutes, which are both just crimes against the sport, quite frankly.

Others have bemoaned the fact that although you can play online, you can’t get a match going with all your mates involved, which is a little odd; Nintendo have managed it with the likes of Splatoon, but clearly didn’t want to invest in the same online infrastructure here.

It may sound that we think Mario strikers Battle League is a bad game – it’s not, it’s just not for us. It has very little to do with the game of football itself, and there’s nothing wrong with that, but it does feel like its missing elements; a story mode for instance would have given it a bit of life.

If you can keep up with what’s going on on screen, there’s some fun to be had. If not, you might be content to sit this one out from the subs bench.