One of the key, vital elements of the great game of tennis is timing. Everything from serving to returning relies upon it.

It’s ironic then, that the latest entry in the tennis gaming world, shows so much poor timing on its release, just at the end of one of the biggest Grand slams. Did no-one think to check the calendar and see if any were on the horizon, as surely it would have made more sense to release it just before the tournament starts?

Regardless, it also happens that it’s not just timing this game struggles with. 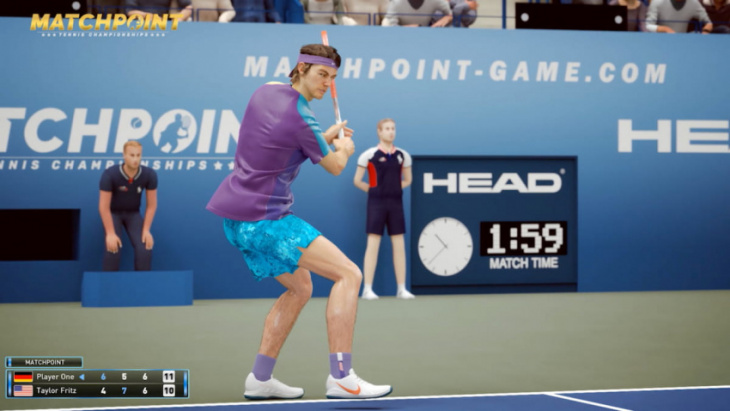 Sorry dude, I just can't help laughing at the sign behind you - head, huhuhuhhuh.

After a relatively straightforward tutorial, that illustrates a few innovative ideas for the genre, it’s time to jump into the career. Obviously it’s nothing we haven’t already seen before, only better, sadly in the likes of the Virtua Tennis, which is essentially the title all others have to compare themselves too. And unfortunately, this one doesn’t compare too well.

After you’ve created a player, you are thrown in to your first match, or part of it at least. It’s the last few points, and we were handed our proverbial behinds on a plate, and lost severely; although we aced the tutorial, playing an opponent was almost another ball game.

Then the calendar opens up as you make your way through the tennis year ahead. You quickly find yourself in tournament mode, with a choice of two to pick from the calendar at this point.

The game certainly doesn’t break you in gently, with a fairly difficult opponent as your first challenge. So much so that we lost. We then checked if we were on hard mode, but apparently not, only semi-pro, the middle mode between amateur and professional. As this wasn’t our first time on court, it was surprising how much the difficulty was ramped up. Perhaps it was just an anomaly. Turns out it wasn’t.

Right from the off these players appear to be on top of their game, and keen to prove it to you. They are seemingly on roller skates as they glide effortlessly around the court, returning every ball, one after the other. We clearly had to raise our game, especially as we lost our second match on the trot. 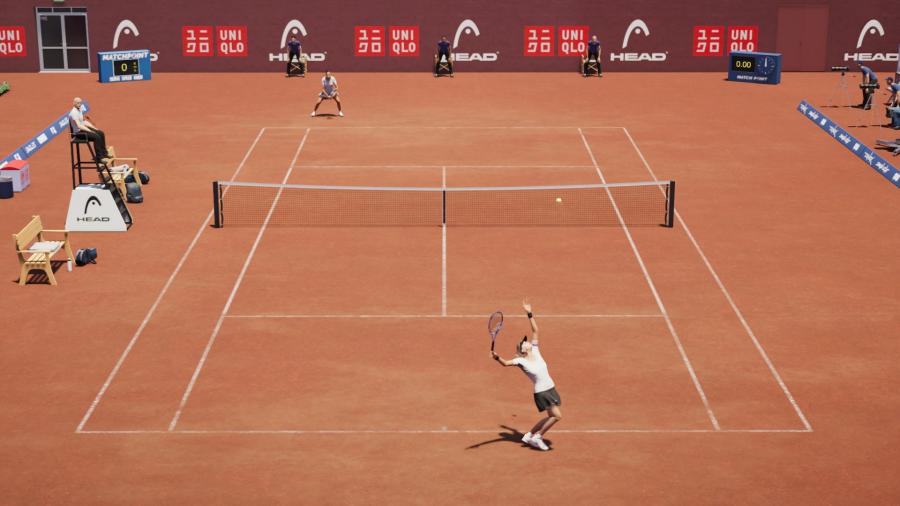 I think this is the perfect time to play statues.

Another tournament and fresh hope. Which, as it turns out, was quickly dashed. Whoever trained the last guy, appeared to train this one too, as their aggressive manner of play was exactly the same. With no seeming difference, other than physical looks, between opponents, this was going to get very dull, real quick.

But then you’ll find that you’re getting the hang of this tennis thing. Certainly the return mechanic takes some getting used to, as a black shadow spot appears in your opponent’s half, which you can move with your joystick to the area you want your return to land. When you get the knack of it though, it feels a satisfying action – when it works.

We’re not sure it’s a glitch or not, but there were times when a spot had already become a certainty when it came to serving, suddenly saw the ball off by some margin, causing a fault. Damn straight it’s a fault. So there seems to be a consistency issue here.

The career is also on the repetitive side, as you simply go from one tournament to the next. It’s not helped by the fact that each surface plays disappointingly similar, lacking any variety in their mechanics.

There’s also an issue when it comes to its visuals as it’s as ugly as sin to look at, particularly the character models. You wouldn’t know we were in the next-gen, with facial features akin to those found in 1997’s classic GoldenEye 007 game, that look like the image has been wallpapered on.

Even the way they move around the court looks robotic; at one point, if your opponent hits a ball deep, your character can completely disappear in an attempt to return it. The developers are keen to state how realistic their game is, but we’re not sure how often that happens on the tour.

One interesting element the game does have is that after playing a game for a while, a player’s strength or weakness should pop up, to help break their game down. The problem is, you can just continue how you’re playing if it works for you, particularly when your serve will take you a long way on its own.

The commentary is woefully poor too, almost being the definition of phoned in. It’s not terribly accurate either, with the commentator often forgetting that the next point wasn’t only for the set, but the match too. So it doesn’t help itself in building up any tension.

Even the fact that the speed monitor for serves can’t be seen, as it was weirdly placed behind the score board, is another niggle.

We’re not sure how it performs on the PS4 and Switch, but we also made the mistake of playing it on the Xbox One S, and it was almost unplayable, with the travelling of the ball an annoying blur; so you may want to give it extra consideration if you’re thinking of it for one of these other systems.

The game is rudimentary, offering nothing new or exciting, is disappointingly dull, lacking any sort of personality much like the majority of the current roster ATP players themselves. It does feature the bad boy of tennis, Nick Kyrgios, but he’s really the only recognisable name from the sixteen professional players the game features.

Considering the rich history of solid tennis games, such as Virtua Tennis and Top Spin, recent releases have struggled to come even close to them, especially this one.

At least it’s on Game Pass if you’re curious to try it out, but really, there’s no need.