Any mention of aliens these days and a lot of folk get freaked out; they end up doing nonsensical things like demanding to build walls and leave Europe. It sounds the perfect time then for the return of the Men in Black.

It’s been seven years since we last saw the agency send out teams to save the day. This time around they’re diversifying their outlook, expanding their remit to outside the US and...wait for it, allowing women in on the action too. That’s right, crazy times. 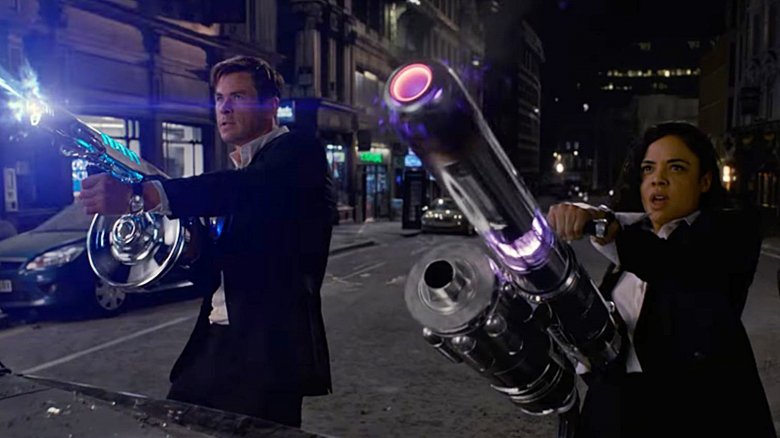 This seems a lot of trouble to go to win a Buzz Lightyear soft toy, don't you think?!

After an encounter with an alien life form when she was just a child, and witnessing a team arrive to assess the situation, Molly (Tessa Thompson) has dreamed of joining such an agency. Now grown up she’s still keen on doing just that, however unlikely it may sound.

But after much perseverance, she ends up walking through the right door – that of the New York City branch of MIB. There she meets Agent O (Emma Thompson), who likes what she sees, and places Molly on probation within the agency, and henceforth known as Agent M.

Her first assignment is to head off to London, where O believes there’s trouble brewing. There she meets up with Agent H (Chris Hemsworth), and it’s not long before they find themselves in some messy intergalactic goings-on that could put our world in serious trouble.

With sharply-dressed MIB regulars Will Smith and Tommy Lee Jones on sabbatical indefinitely, it’s time for some new recruits in the shape of Hemsworth and Thompson. They may be new to this franchise, but not to each other, as they are both paid up members of the Marvel union, with Hemsworth playing Thor to Thompson’s Valkyrie. This history no doubt helped, as the relationship on screen here is relaxed and entertaining.

It’s this chemistry, as well as some engaging dialogue throughout that gives this entry that welcome spark. It’s also helped out hugely by the introduction of the character Pawny, voiced by Silicon Valley’s Kumail Nanjiani, who, off the back of this scene-stealing debut, deserves a spin-off all of his own.

Director F. Gary Gray does well in keeping the pace at a pleasing tempo, which helps paper over the obvious cracks in the story, which is the weakest element of the film.

It’s hard for an established franchise to introduce new characters into the mix, but Hemsworth and young Thompson rise to the challenge effortlessly, proving that they can hold their own against any other MIB agents.

With the ground work done, hopefully they can provide a better vehicle story-wise for their next mission, and the ‘Agents’ in Black, can do what they do best, in making man and alien kind get along.