Gamers can be such touchy folk; when this title was announced at 2015’s E3 event, it was greeted with the kind of enthusiasm usually reserved for stinky lepers. Not that they didn’t like what they saw, per se, but it just wasn’t what they wanted, which is a Metroid Prime game proper, and not yet another spin-off. It was always going to be an uphill battle since then, and it has been. Fans even started an on-line petition to cancel the title completely, which picked up a number of signatures, such was the harsh resistance to this particular game. Ouch.

It’s been six years now since Metroid Prime’s main protagonist Samus has graced a console (the Wii) and fans are desperate for her to return, Ninty have other ideas however.

This iteration is more similar to 2006’s Metroid Prime Hunters on the 3DS, in that it’s a first person shooter, which can be played either solo or in co-op mode online.

You play a marine, suited and booted in a mech suit, taking orders from the galactic federation. You are then sent on missions, visiting a number of planets, where you have to take down the enemies that invariably attack you. Nothing too offensive there then. 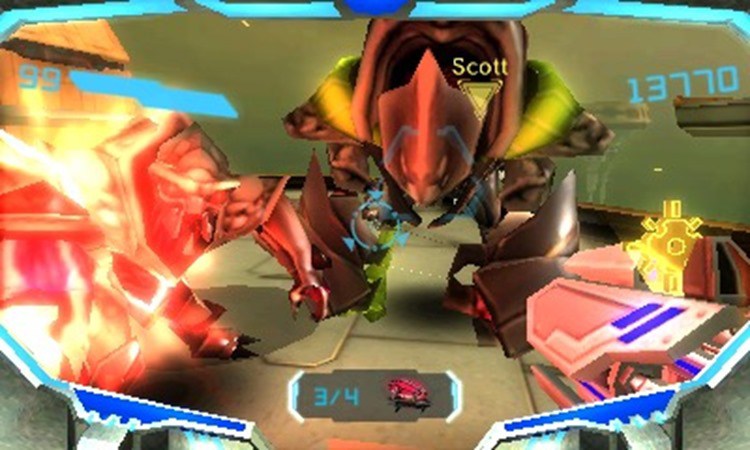 Hey Scott, any chance we could sit down and just talk this out?

Playing on your own is not recommended however, not unless you have the kind of patience of the proverbial game-playing saint. Or you’re just shit hot. As a solo marine you start off with the usual 100% health bar, and goes down whenever you take a hit. However, there aren’t any health pick-ups, so when we were first introduced to the end of level boss, we were down to about 17% health. No worries though, we would die, and just spawn back at the start of the battle with a full health. Or so we thought. We were actually sent all the way back to the beginning of the mission again, and had to work our way through the entire level once more, despite having saved our progress. Life is really too short.

There is a grain of hope by way of one of the mods you can pick up for your mech, which allows you to shoot out some health and pick it up and restore your depleted bar. However, they don’t make it easy for you, we found a health mod whilst playing the added Blast Ball game, and even then, the mod doesn’t last, which means when it’s finished, when you die...back to the start of the mission you go.

It’s difficult to see why the game even bothers to save your progress throughout if it insists to boot you back to the start of a level every time you die. No, no, and no. It’s a real shame as the game plays pretty well and looks impressive on the 3DS. It still suffers from fuzzy visuals when you are invariably waving the console uncontrollably through the air, but if it gets too much you can always turn the 3D off. 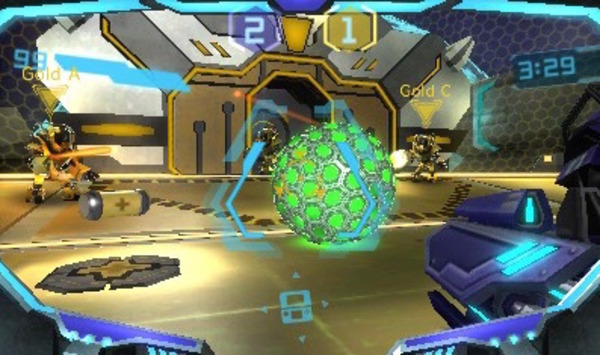 There’s more chance of progressing through the story online with up to four others in multiplayer, as you get to help each other out. The developers have even thrown in a footie-based game Blast Ball, which isn’t exactly FIFA, or Rocket League for that matter, but it’s a little extra something, that may appeal to some.

So it’s clearly not the Metroid Prime that many are craving, but it’s an adequate stop gap until Samus makes a return.