To finish off his unofficial European trilogy tour (London with Match Point and Barcelona with Vicky Cristina Barcelona), Woody Allen arrives at the 'City of Light' itself, Paris. Thankfully, this final destination sees Allen in an unexpected return to form as his Parisian jaunt contains flashes of classic Woody.

As well as being known as a romantic destination, Paris also has a reputation for attracting creative types. The French capital has been a veritable magnet for creativity over the years, as writers, painters, poets etc have been drawn to its artistic centre.

Gil (Owen Wilson) is one such creative type; he's written some lightweight screenplays that have made it to the screen, but he wants to try his hand at some proper writing  a novel  and what better place to attempt such a thing than Paris?

But of course he's not just there to write, he's also there to see its many sites, along with his fiancé Enez (Rachel McAdams). However, although there's denying the romance of the city, Gil finds it gets a little crowded when Enez's parents happen to drop by, as well as an old friend of Enez's called Paul (Michael Sheen).

In an effort to avoid going dancing one night, Gil decides to skip it in favour of a walk on his own. As he stops to rest briefly in a small street, a vintage car rolls up and its revellers inside beckon Gil to join them.

They get out at what looks like a fancy dress party, with everyone wearing 1920's garb. Gil is taken by the entire theme, as he walks around taking it all in. His head starts to spin a little when he's introduced to a swell couple  Francis (Tom Hiddleston) and Zelda (Alison Pill) Fitzgerald. It doesn't take Gil long to realise that they are in actual fact the Fitzgeralds, with Francis also known as F.Scott Fitzgerald. This was no theme party, this was the 1920's.

Gil worked out that the car that picked him up, although not up there with a DeLorean, had managed to travel through time, with him in it. And by turning up at the place he first saw it, at exactly the same time  midnight  Gil discovered that he could go back to that same period as often as he liked, which he does. On various trips he would meet an incredible wealth of writers, thinkers and artists of the time. He was even cheeky enough to take his work in progress novel and get it critiqued by the writer Gertrude Stein (Kathy Bates).

But the more Gil travels into the past, the more uncertain he becomes about his present with his fiancé and their impending future together. 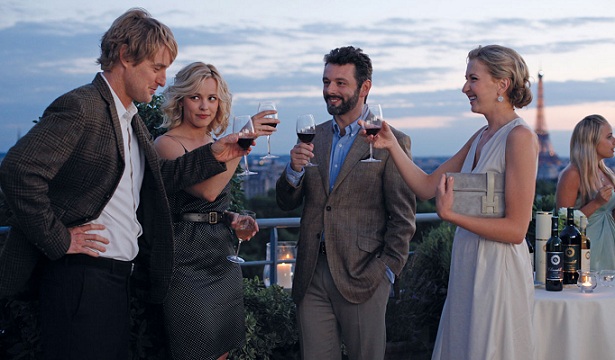 And finally a toast to Marley, who I accidentally ran over soon after shooting. I miss you boy.

Since Allen has stopped appearing in his own films as the main protagonist, he's really struggled to find a character with whom he can channel his own screen persona through. He may have struck gold in the surprising form of Owen Wilson. Of course he's no where near as neurotic, but he certainly embodies that awkward charm well enough.

Allen has clearly gone off the boil now, as both writer and director, for a number of years. It would be fair to say even, that he hasn't made a decent film since the early nineties (Husbands and Wives, Manhattan Murder Mystery) and even further back for a truly great one.

This may well be a cerebral time travelling tale, but there are elements of it that are reminiscent of Allen at his joke-telling best. It's certainly Allen at his wittiest, warmest and most amiable in quite some time.

He also gets some great performances, most notably from his 1920's contingency. Corey Stoll gives a great account of his talent playing Hemingway, and although only brief, Adrien Brody makes an amusing impact in his cameo as Dali.

Owen Wilson is in great form too. He, much like the film's director, has lost his way creatively recently, so it's a joy to see him find his stride once again with an utterly charming performance.

Far too many great directors go off the boil after a number of years, Allen included. Here however, he has done what many thought he was unlikely to do in his career again, and that's make a terrific film that, from beginning to end, feels like a proper Woody Allen film. Even if it only happens once, we'll always have Paris.