Question – when is a US film not a US film? Well, according to the Golden Globes, Minari, a film about a Korean family starting a farm in rural Arkansas, fell foul of their rules, which states that if a film contains more than 50% dialogue in a language that isn’t English, it can only be considered in the Foreign Language category, and not Best Motion Picture.

It’s perhaps not quite the slur it initially sounds, especially as the Globes awarded the film best Foreign Language title, and more a sign of the archaic rules that they still adhere to.

But despite its subtitles, Minari could quite possibly be just as American as apple pie. 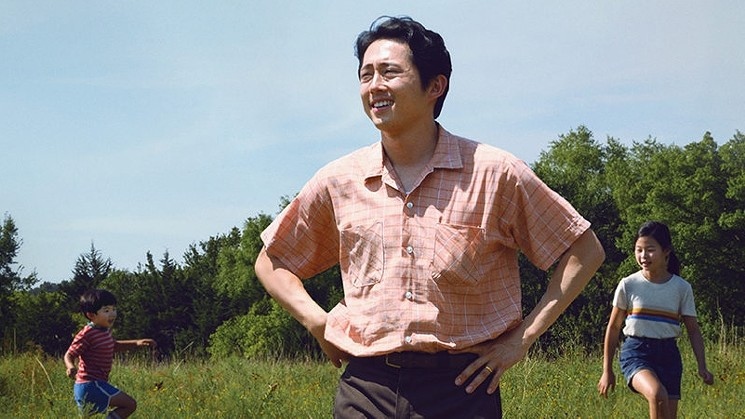 You know, it's just nice to be able to walk through a field without being attacked by zombies.

After working his fingers to the bone for several years in California, Jacob (Steven Yeun) decides to pack up his family and head off to Arkansas, where he’s bought 50 acres of land with a mobile home on it.

His wife Monica (Yeri Han) isn’t all that impressed with his idea to start farming in the middle of nowhere, and even less impressed with the bare, run down accommodation, but goes along with it.

The strain on their relationship is eased somewhat, with the arrival of her mother Soonja (Yuh-jung Youn), but it doesn’t please everyone; although their daughter Anne (Noel Kate Cho) is accepting, her younger brother David (Alan Kim) is far from convinced that she’s actually grandma material.

Although Jacob has a sense of direction, it’s not long before he’s hit with the realisation that the American dream isn’t for everyone. 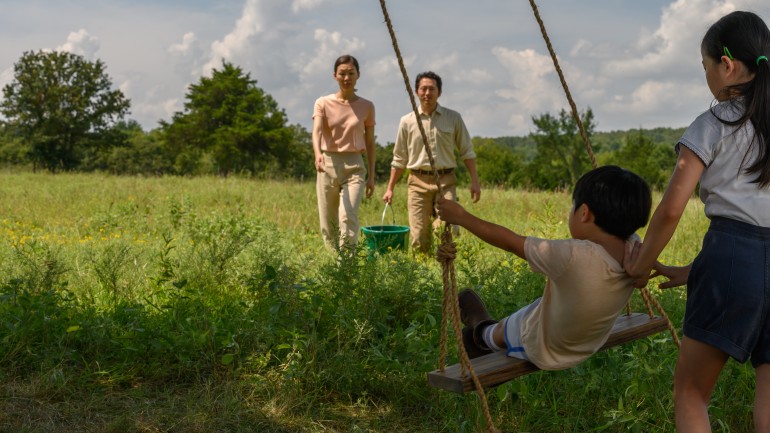 You distract him with the bucket then I'll jump on the swing!

They often say write what you know, and that advice has turned out pretty well for US writer and director Lee Isaac Chung, who grew up on a small, rural farm in Arkansas. His story is a universal one, that of a family wanting to better themselves, to embrace the American dream, and to become part of its fabric.

Of course, as his film explores, this journey very rarely goes to plan, and if it does, it’s usually at some cost. Jacob may not speak English often, talking to his wife and children in Korean, but he is the everyman. He follows in the footsteps of classic films, possibly starring Henry Fonda struggling in the dust bowl of the thirties, who just wants a better life.

Even the film’s title is a metaphor, minari, a plant that Soonja brings from her homeland that is wide spread in Asia, often used in cooking, that she plants near a river in the hope that it takes root on this new soil, just like the family.

Although the film features three generations, it’s at its best when the youngest is with the oldest, more specifically the wonderful relationship between David and his grandmother. It is the film’s emotional crux, which it relies on often, as the adults go about their lives. In fact it’s fair to say that young Kim steals the show with a remarkably natural performance, as he navigates all this virgin territory in front of him.

Chung could have easily poured syrup all over his family tale, which would have made almost indigestible, but thankfully he gives it a more open feel, embracing the space and sounds of the farm environ. He also never feels the need to rush things, with a tempo that has an almost real life feel, which some may feel a little sluggish, but in truth, it just adds to the reality of it all.

With Oscar righting the Globe’s wrong, by having the film nominated in the Best Picture category, at least there’s a sense of acceptance of Minari being an American film, whatever that may actually mean these days.

At its heart however, Minari is a story that has been offered untold times, and Chung has shown remarkable skill in telling his version exceptionally well, making it a tender and touching family affair.