Ah the open road; driving along with the wind in your hair and some great tunes on the go. If you live in a major city however, it’s often another story. Bumper to bumper traffic, cyclists cutting you up and a whiff of road rage in the air.

With more cars on the road than ever before adding up to more stress, what better way to cope than playing a road management sim. 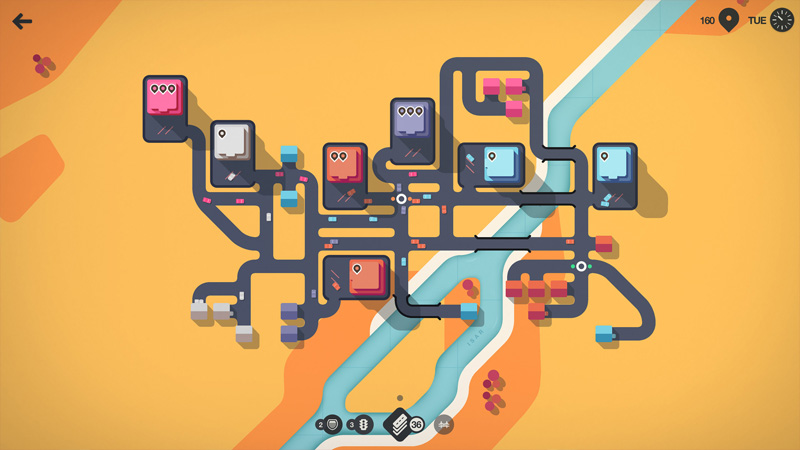 OK, this is the weirdest Pac-Man game ever!

And at first, it’s quite a chilled experience. You have a graphic map that represents a real city in the world, where a building will pop up and then a house. All you have to do is connect them by road, it’s that simple. To begin with at, least.

Then another house will pop up, then another, then, wait, there’s another building. The thing is, the buildings and homes are colour co-ordinated, so if a red house appears, the car that leaves it needs to go to a red building.

The tranquil soundtrack belies the road chaos that’s to come, with more and more different coloured buildings and houses appearing with every day that passes.

The game plays out in cycles of a week, whereupon you are given the opportunity to choose various tools to help you progress, such as roundabouts, traffic lights, motorways, bridges and tunnels, as well as further road tiles to place down, which are limited from the outset. 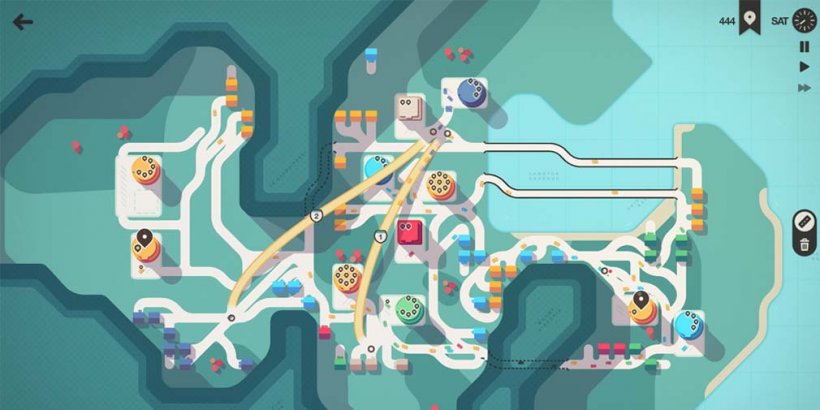 Wait, are they allowed to do this on a golf course?!

Your score is the number of vehicles you have transported successfully from A to B. The game comes to an end when a destination doesn’t receive enough vehicles in the time allotted. If you manage to get a certain score however, you can unlock the next destination, of which there are currently fourteen.

The graphical style of the game is hugely appealing, with a colour palette of warm tones and pastels, and just enough detail on the maps to get by.

And even if the fourteen maps sounds like its short changing gamers, they don’t as there’s a fair amount of replay value as even though each map is the same, the location of the buildings and houses is randomised every time you play.

On top of that there’s both a daily and weekly challenge you can participate in, where your score will appear on a world leader board. It might not be worth checking however, unless you are a hardcore road planner, as there are some truly big scores at the top. After putting in what we thought was a decent score, we’d check with the rest of the world, only to find we were always in the bottom 25% despite our efforts.

But it’s a game that you don’t need to be competitive with, simply experienced and enjoyed.

It would be nice however, to be rewarded somehow other than just unlocking another city; even with the challenges, once they’re done, there’s no follow-up, which kind of makes them somewhat immaterial.

The game does have an addictive quality however, like many Sims it’s the notion of spinning plates until one falls. But you also have to decide what would work best in each scenario: with traffic building up, would it be best to put some traffic lights in place or a roundabout, and would a motorway help move the traffic from one area to another quicker.

One little tip is this: the game doesn’t tell you this, but if you hold down on the A button over a house, you can change the direction of the road in front of it. This means that sometimes you can turn it onto some existing road, without having to use further road tiles to connect them.

Mini Motorways is a perfect game to pick up and play, but a difficult one to master. It’s also one that you can dip in and out of, investing as little or as much time as you want. We often found that doing one or two cities in one sitting was enough to satiate our road planning needs.

There’s something mesmerising about it, with its chilled soundtrack and simple mechanics, it’s a game that can so easily get you in the zone, whilst also drive you crazy.

But if you’ve ever fancied the idea of a little light road planning on a global scale, this one puts you firmly in the driving seat.