So often in life, kids end up taking advantage of their parents, in one way or several others. It usually starts off with small stuff, like silly amounts of pocket money, or demanding a new phone to ignore them on, to ultimately moving back rent free because of your failed life/marriage and demanding they sign up to Netflix so you can catch season 2 of Jessica Jones.

To their credit, they take it all. They soak it up, usually through gritted smiles, and continue to be generous to a fault, because they love you unconditionally. But what if they didn’t? 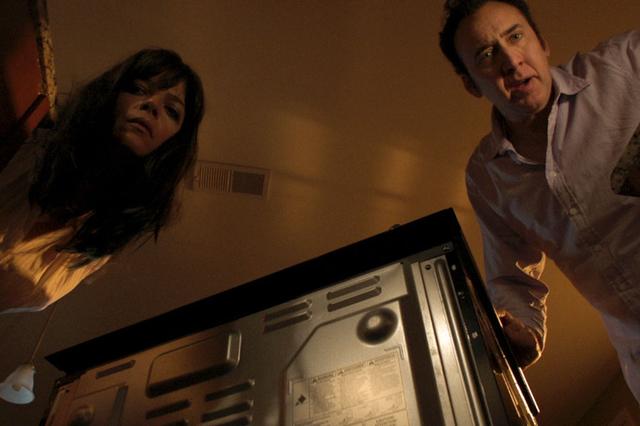 Oh. So that's where Tiddles has been all this time.

Life could be a lot worse for young Carly (Anne Winters); she has a nice boyfriend in Damon (Robert Cunningham), living in a nice area, in a nice house with her younger brother Josh (Zackary Arthur), and of course her annoying mom (Selma Blair) and dad (Nicolas Cage).

One day in high school, things get a little...weird. Kids in her class are asked to visit the office one by one, and police sirens can be heard all around the school. With class over, Carly and her friend notice a cop trying to prevent a mob at the gate from getting in. On closer inspection, they appear to be the parents of students. They look different somehow, more aggressive, and they don’t look like they’re here just to pick up their kids. When they start to physically attack their own children, Carly realises they’re not.

With the world seemingly going crazy, the safest place for Carly to go is home. Or is it?

What did I tell you about listening to Ed Sheeran in my car?!

It doesn’t take long in to this feature to realise that it is completely loopy. Everything about it is outrageously heightened and distorted. It is a throwback to eighties video nasties that fed VHS machines at the time, accompanied by a John Carpenter inspired score.

Writer and director Brian Taylor isn’t interested in the hows and whys – it’s something vaguely to do with signals sent through TV’s and radios – and instead chooses to just run with the thin concept of parents turning on their kids. And why the hell not. The result is what Get Out was to racism, Mom and Dad is to parenting.

It’s also finally a safe space for Cage to go completely OTT, and not look at all out of place, which is an impressive achievement.

Taylor has successfully reversed the notion of children as little monsters, by literally turning parents into adult ones. It is dark, twisted, full-on and outrageously senseless fun, whilst redefining film’s take on the family unit.

Just like weird cousin John, who wears black eye shadow in his forties, not everyone will get it. But if pirate video nasties are in your blood, welcome home.