Compared to the myriad of channels and streaming sites today, children of the seventies had relatively few choices when it came to TV, which certainly wasn’t aided by the fact that there were only three TV channels to choose from.

Much of it was fairly sanitised home-grown fare, such as Blue Peter, Magpie, Jackanory etc, which was all family friendly.

In 1979 however, something very different indeed arrived on our screens, with the introduction of Monkey to BBC2. 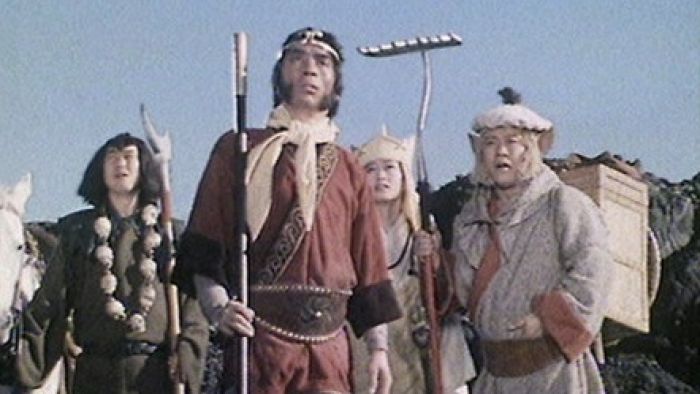 Hey you human, hit the side of the TV, we're all feeling too fuzzy in here!

It was the story of Monkey (Masaaki Sakai), born from a stone egg atop a mountain, with extraordinary strength and powers. After a pop into heaven, where he thinks he belongs as a god, he gets into a spot of bother, which sees Buddha have a mountain fall on top of him, imprisoning him for 500 years, just to teach him a lesson.

He is eventually rescued by a priest, Tripitaka (Masako Natsume), who is about to embark on an incredible journey, travelling from China to India, in order to retrieve some holy scriptures. It’s in Monkey’s best interest to accompany the young priest, and protect him as best he can from the many foes, demons and evil spirits that lurk the land.

The pair are also joined by Sandy (Shiro Kishibe), who was turned into a water monster after breaking a jade cup in heaven, and Pigsy (Toshiyuki Nishida/Tonpei Hidari), who was also turfed out of heaven for his over-amorous behaviour.

Although now well protected, it doesn’t stop Tripitaka and his super-powered companions running constantly into trouble, as the road to India proves to be a treacherous one. 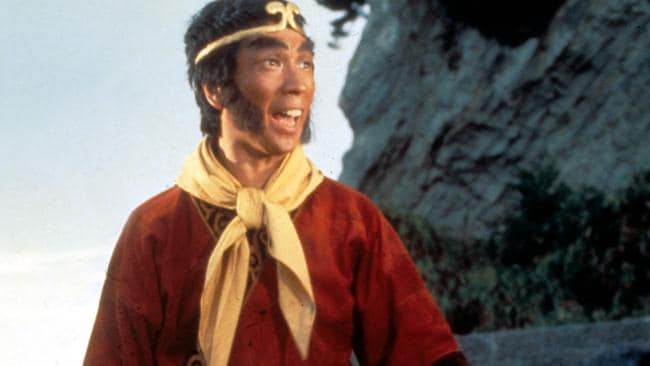 If you’re unfamiliar with the show, then the first thing you need to understand is that it was utterly bonkers. Take the character Monkey himself; not only was he incredibly strong, he also had the power to transform his physical appearance, as well as provide weapons or allies from pulling tufts of hair from his body. And not forgetting he could summon a cloud to transport him about like a nimbus Uber with just a whistle. And as we were reminded every week in the show’s impressive title sequence, he was irrepressible.

Then you had Sandy, who was turned into a cannibalistic water monster, and Pigsy, who was given the physical appearance of a pig. As sidekicks go, they were a heady mixture of loveable and terrifying.

And then you had the mysterious Tripitaka himself, who must have caused many a young boy to question their sexuality, with his shapely lip-painted mouth and soft feminine facial features. If he did cause unusual stirrings, then some relief can be taken in knowing that he was played by a woman. The fact that Natsume was cast to play the young male priest only adds to the overall atmosphere of panto that the show created; with it’s over the top characters, who were often jibing each other like clowns.

It could also be argued that the Japanese show was a gateway drug to foreign culture. Despite being dubbed, it’s not difficult to imagine it being a stepping stone into adventures in World cinema, which certainly grew in popularity in the eighties with the success of films such as Jean de Florette and Betty Blue.

And although dubbed material is usually frowned upon, the British cast brought in to voice these larger than life characters, somehow managed to make the experience even more magical. It’s difficult to imagine that a group of white, middle-classed thespians would now be allowed to voice Japanese characters, but those involved, including recognisable names such as Andrew Sachs and Miriam Margolyes, clearly did so with nothing but love and fondness for their on-screen counterparts.

The show wasn’t just loved here in the UK, but also in Australia and New Zealand, so much so that it was recently remade by Netflix (who else?!) - The New Legends of Monkey - by an Australian and New Zealand co-production, that has currently aired two seasons on the streaming platform.

This Blu-ray box set then contains all 52 episodes (series one and two) of the classic, cult show, in a nicely restored print. Of course it’s still in the 4:3 ratio throughout, and there’s still a fair amount of graininess to be seen, but considering the show is over forty years old, they’ve done a remarkable job. The sound and colour is top notch, and is bound to return those who remember seeing the first time around, into a giddying, beaming stupor.

It’s also worth noting that the BBC held back 13 episodes from the second series, which are included here, as they were deemed inappropriate for the timeslot.

Extras are sadly thin on the ground, with only a dated, 30 minute documentary narrated by Richard Bacon, covering the reunion of the cast to voice the recovered 13 episodes, 25 years after they worked on the original batch, making it around 15 years old itself.

It would have been fascinating to see some kind of documentary on the making of the show in Japan itself, and contributions from those involved, or perhaps even an episode subtitled allowing us to hear the voices of the original cast at last, but sadly nothing like that appears.

But what you do have is a box-set that for those that were there, will be a hit of nostalgia like no other. It’s a show that could be considered well-ahead of its time, in terms of creativity, inventiveness and pure escapism, as well as softly introducing an element of spiritualism through the teachings of Buddha.

It may well be over forty years old, but what this box set proves, in its polished, restored state, is that this classic, much-loved show still has its monkey magic.


***Fancy winning a copy of this cracking box set? Then enter our competition! For your chance to win a copy on Blu-ray, Click here to enter.***