It’s amazing to think how much hard work and dedication goes into making an animated feature these days. Years of your life poured into bringing characters to life onto the big screen. It must be hugely disappointing then, when the end result is so poor that it’s been a complete waste of your time. And ours too, if you have the misfortune to sit through it.

So for all those involved in Monster Family, we pity you all. 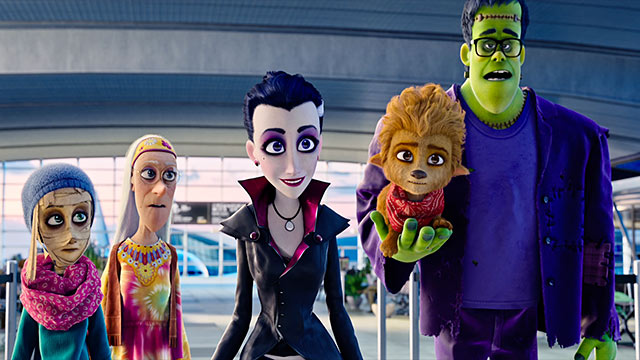 Don't worry, he's de-flead. The mutt is too.

Emma Wishbone (Emily Watson) is all too aware that her family are stuck in a rut. To try and do something as a family, she plans to surprise them by taking them all to a monster costume party.

She phones a costume shop on her phone, in order to organise some outfits, but somehow dials a wrong number. She instead ends up talking to a certain Dracula (Jason Isaacs), who during their call, becomes transfixed by her.

He is very lonely in his big castle in Transylvania, with only some bats and his man servant Renfield (Ewan Bailey) for company, so he is more than ready for love. Instead of working for it though, he decides to get a witch he holds captive, to cast a spell on Emma to turn her into a vampire.

The spell works, but too well, as it also transforms her entire family into monsters – her daughter Fay (Jessica Brown Findlay) turns into a mummy; her son Max (Ethan Rouse) into a werewolf; and her husband Frank (Nick Frost) into Frankenstein’s monster.

They learn that a cure might be had in London, but they had better get a move on as Dracula is on their tails, in an attempt to steal the heart of Emma, as well as all her other bits.

If there were to be a Uwe Boll (often cited as being one of the worst film producers/directors in recent memory) of the animated world, then director Holger Tappe could be a strong contender. He has, after all, directed such timeless animated classics as 2004’s Boo, Zino & the Snurks, Impy’s Island, its riotous sequel Impy’s Wonderland, and Animals United.

Although he has a number of tiles under his animated belt, he still appears to struggle with the medium, if this sad effort is anything to go by.

Nearly everything about it is wrong. The concept is half-baked, the script lacklustre and the characters are all dull and clichéd. The film doesn’t help itself by having a family of white, middle-classed Brits as its main protagonists, who find themselves, oddly, living in a borough of NYC that is curiously home to nothing but Brits. In short, they are just too darn posh to care about.

As casts go, this is a good one, but their vocal deliveries are so atrocious, it’s unlikely they’ve done anything like this before. The daughter also doesn’t sound like a teenager, sounding more like a woman in her thirties; it’s no surprise then that the actress playing her is 28.

The one minor thing in its favour is its animation; it’s a bright and colourful world, nicely brought to life, and should appeal to what should be its target audience – the under fives.

In a colourful world brought to life by the likes of Disney, Pixar and DreamWorks, films like this just can’t compete, on any level.

A monster fail that would see Dracula turn in his grave.