The future is going to be bonkers. Things will happen that will have the capacity to blow our tiny minds. Quite possibly literally. Self driving flying cars will just be the tip of the tech iceberg that we’re currently veering head on towards in a Titanic fashion.

This film however, based on the popular book franchise of the same name written by Brit Philip Reeve, probably takes place after all that happens; when the world has been brutalised by advanced tech in the wrong hands. Yes, it’s bound to be Trump, that’s who the smart money’s on. 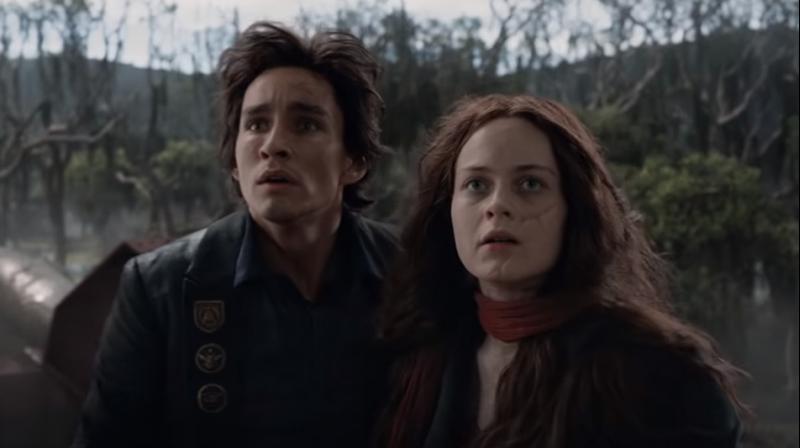 No, it can't be, can it? Are they really our box office numbers?!!

It didn’t take long for things to turn to shit, as you can guess from what was named the Sixty Minute War. The planet was in a right old state, with humanity attempting to rebuild from the rubble left. And that they did, but with a twist; cities weren’t just built as they once were, they were turned into incredible vehicles that could traverse the lands.

One of the most impressive, and imposing is London; a predator city like no other, with the ability to engorge smaller cities in its path. This is exactly what it does with the more compact city of Salzhaken, and all its inhabitants. The city itself will be dismantled for scrap, and its population will be offered work in London.

Working in London’s museum is Tom Natsworthy (Robert Sheehan); he’s been tasked with attempting to salvage any rare bits of tech for historical purposes, before the junk gannets get their grubby claws on it and destroy it all.

Once down in the bowls of the city, Tom manages to prevent a masked woman from Salzhaken from assassinating Thaddeus Valentine (Hugo Weaving), a prominent historian with one eye firmly on the future. Although the woman, Hester (Hera Hilmar), manages to escape, Thaddeus is grateful to Tom. Or that’s what Tom initially thinks, until he lets on what Hester told him before her getaway. Then he discovers that Thaddeus shows his gratitude in a most peculiar way.

Tom soon finds himself not only in the company of Hester, but also on the run with her. She tells him that Thaddeus isn’t the upstanding citizen he makes out to be, and it’s not only the two of them that are in serious danger. But with an entire city bearing down on them, it appears that the pair have an ironclad mountain to climb if they have any chance of saving the world.

Although Hobbit-y Peter Jackson bought the rights to the books, he served only as producer on the project, handing over the creative reins to his Wingnut Films protégé Christian Rivers to make his directorial debut, after having helped out on a number of Jackson’s projects in a visual effects capacity.

And it has to be said that he learnt well from his master. Mortal Engines is an epic adventure on an industrial scale, with Rivers proving to be a true captain of industry. The imagery on screen is jaw-dropping to behold, with the city of London complete with landmarks such as St Pauls and City Hall part of its facade, grumbling forward with a weighty menace.

It has to be said that it’s visually stunning with a highly distinctive style, borrowing elements from the likes of Terry Gilliam and Caro & Jeunet. But if you’re going to nick stuff, do so from the best. It struggles more with its narrative in terms of originality however, with a storyline theft more blatant.

The deeper you get into the film, the more of it becomes eerily familiar to you. To say that it’s essentially a steampunk’d Star Wars isn’t that far off the mark. Not only is the tale not a million galaxies away from Episode IV, there are also heavy visual influences include craft and locations, including its floating city that is a recycled knock-off of Bespin from The Empire Strikes Back.

Where Rivers struggles is in getting his cast to emote on the same scale as his visuals. Many of the performances are on the flat side, with much of the dialogue expressed with the same kind of fervour as a piece of IKEA furniture.

It doesn’t distract however (how could it?!) from the sumptuous visuals. Sure, the script could have benefitted with some tinkering, but it’s cinematic splendour has been calibrated perfectly, purring as it does on all cylinders.