In 2006 director Joon-ho Bong directed the hugely entertaining and slightly bonkers horror film The Host. There may be fewer monsters in his latest offering, and the horrors it encounters are of different style altogether, but it doesnt make it any less chilling.

Theres no denying the fact that theres an inseparable bond between a mother and her children; however, when a child is mentally fragile, you can expect that bond to be stronger and tighter than most.

One such mother (Hye-ja-Kim) has been bringing up her son Do-Joon (Bin Won) on her own for many years in a small town. Do-Joon is her life, and the fact he suffers from a possible mental disorder means that shes even more protective of him.

When a young girl is found dead, and a piece of evidence is found linking Do-Joon to the scene of the crime, police believe they have an open and shut case. Obviously his mother believes hes innocent. However, she goes one step further by attempting to prove that he is. But as she soon finds out, the truth can be most elusive of things. 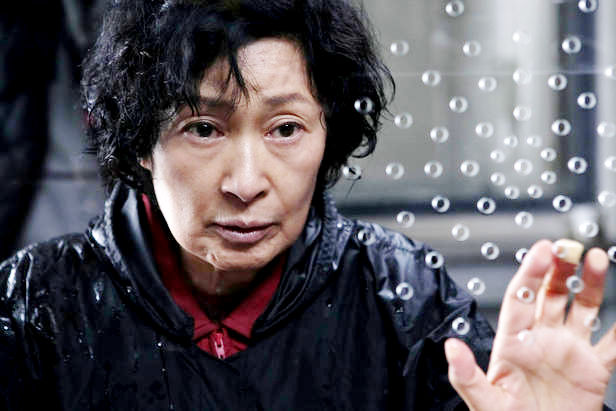 Listen, I just put my stupid ticket in the machine and now it won't come out!

What at first appears to be a gentle portrayal of a close relationship between a mother and her son, this soon takes a darker and more sinister path. At times Mother feels like Miss Marple on crack, combined with a hint of Twin Peaks on tour. It takes you on a journey where the stops feel kind of familiar, but at the same time youre not completely aware of your final destination.

Bong has certainly created a different beast to The Host. Mother is paced on the slow side, but Bong dangles enough of a carrot to satisfy your curiosity right through to the end.

He also gets a truly incredible performance from Kim; even when she isnt saying anything, there is so much going on behind her eyes that its almost impossible to stop watching her. Its a great role for the more mature actress and Kim absolutely nails it.

Fans of The Host may well be disappointed that Bong didnt serve up more of the same, but they should at least be appeased by the news of a sequel on the horizon. Hopefully though, theyll appreciate his obvious talent on show here and credit him for bringing something just as unusual and absorbing to our screens.