There are a number of things that spring to mind when you think of Argentina: the tango; some of the best footballers in the world; a decent Malbec, and the country Evita asked not to cry for her, to name but a few.

Certainly from a film perspective, you wouldn’t think of it as a nation that excels at producing horror films. But it only takes one feature to pique interest and possibly start the horror ball rolling. And Murder Me, Monster may very well be that film.

With no one prepared to admit to being the one who 'dealt' the smell, it made for an uncomfortable ride.

Out in the middle of nowhere, under the shadows of the Andes, is where you will find rural police officer Cruz (Victor Lopez) and his colleagues. With such a distant locale, their patch is hardly one that has to put up with crime waves, but that is about to change when a head of a female is discovered.

After a minimal amount of detective work, they come to the conclusion that they know who the criminal is. This is made slightly awkward for Cruz when the man they suspect to have committed the crime happens to be the husband of the woman he’s having an affair with.

When further hideous crimes are committed, Cruz begins to believe that not only is it unlikely that their prime suspect is their man, that also perhaps the criminal isn’t human at all. 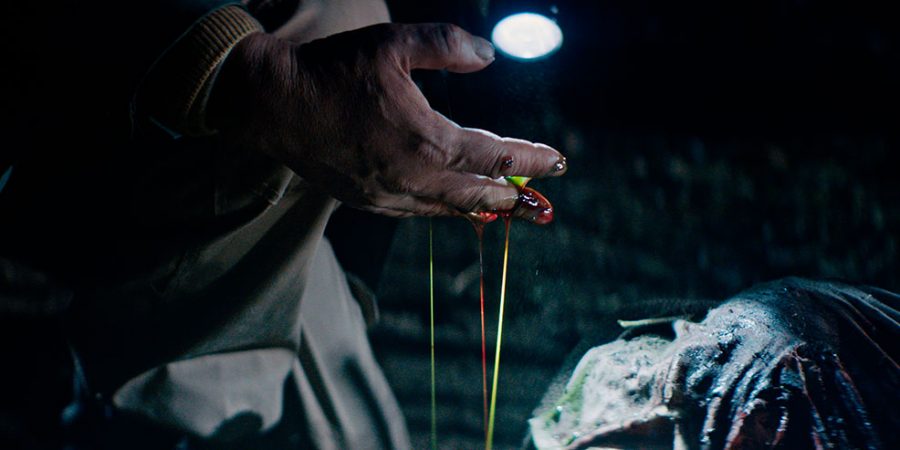 I remember goo being more child friendly than this.

There is something truly unnerving about this film, written and directed by Alejandro Fadel. Much of this is down to its methodical pace, which is in no hurry to rush ahead and show its hand. Instead Fadel creates something rather magical, in a dark and troubling fashion, from its majestic vistas, troubled characters, to some marvellous cinematography.

Fadel’s script is also gripping and truly fascinating; it is a film that touches on mental health issues, as well as the psychological possibilities of man as monster, and the failings of human relationships. On top of that, there are a number of gruesome moments, including the opening scene, that remind you of the dark world you are now in.

It’s a remarkable cerebral horror in the vein of early Guillermo del Toro, which develops ever so slowly, making it an ever more compelling watch as it does so.

It’s that rarest of horror films, a thing of beauty, dripping with both blood and the vulnerabilities of mankind, which is by no means an easy feat to pull off. But Fadel does, and how.

Murder Me, Monster is unlikely to open up the floodgates to Argentinean horror films, but with this emotive and though-proving effort alone, Fadel has made an exceptional film that will firmly put it in on the cinematic map.