We hold our hands up high and admit that were not big fans of EAs Need for Speed franchise. It may well be the worlds most successful racing video game series of all time, but its always felt a little cold and clinical to us. Our interest in the series was well and truly perked by the news that Criterion Games  the British developers behind the Burnout games  were firmly in the driving seat for Hot Pursuit. After all, the Burnout games are most definitely our cup of Castrol.

What Criterion have done with this 16th title in the series is take it back to its roots. The original game, released on the 3DO back in 1994, featured police car chases. That concept is at the heart of this game, with the main single player campaign mode split into two halves; one half sees you driving cars as the criminal element, and the other as the police chasing them. Its simple enough and works the proverbial treat.

The more races you win without getting caught, the more cars you win and the further into the campaign you can go. The same goes for when youre driving around in the cop car, except instead of winning races you have to bust the bad guys, which means taking them down on the streets; you can do this by taking damage off of them by barging into them, as well as using a few gadgets. These include: dropping spikes on the ground; using an EMP (Electro Magnetic Pulse) that can be shot at vehicles; calling for a road block; as well as air support from a helicopter.

To even out the driving field, the criminals cars are well-equipped too: they also have use of the spikes and the EMPs, but they also have a turbo and a jammer to cause havoc with the police radios. 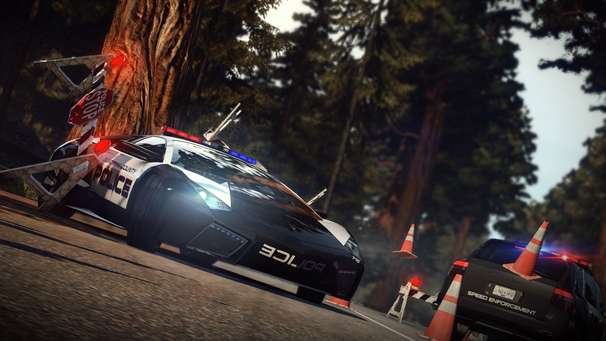 Despite all their training, some female offers still couldn't get to grips with the concept of reverse parking.

All the driving takes place in the fictional Seacrest; not only is it large (allegedly 4 times larger than Burnout Paradise), but pretty scenic to boot. There are long stretches of road where youre able to put the pedal to the metal; be careful though, as not only is there oncoming traffic to contend with, but some very tight corners too.

Throughout the campaign there are a few variations on a theme. Sometimes its purely a race, with the winner being first over the line. Then there are the time trials, which are the least fun ones to take part in, particularly when driving the police car where you have to avoid sliding into the side of the road or hitting anything as you will incur time penalties. Where its at its most thrilling however, is in the chase.

The premise of one car chasing another may be a simple one, but Criterion have really managed to capture the essence of those classic car chases from the big screen. You start to feel your heart pounding when you either have a cop car on your tail, or you have the criminals in your sights.

While driving around Seacrest, ramming other cars off the road, we felt a pang of nostalgia for Burnout games of old. Unlike most, we were not a fan of the most recent episode Burnout Paradise. Although we appreciated all the hard work and effort that clearly went into it, the open world aspect of it just didnt work for us. Were simple folk, who just want to jump in a car and drive from A to B without having to look at some SatNav to get there. Thankfully, NFS: Hot Pursuit is reminiscent of those earlier, more rigid Burnout games.

Online doesnt quite work as well as it really ought to. You can race with up to eight others, with police chasing down robbers. Or you can take part in a duel where you race with one other, again as either the police or crims. And lastly, and rather tagged on, is a race mode where you just race against cars in a first over the line affair. None of these modes fail on any technical level, they just didnt get our juices going.

Petrolheads will probably be impressed with the amount of fast cars available; as Top Gear isnt our favourite show however, we were just happy that you could drive them in a nice array of pretty colours.

What even we realised was a noticeable difference in handling amongst the models. Some take those corners smoother than others, and getting that drift right can make or break your run.

The biggest surprise for us overall was just how much we enjoyed playing it. Cops n robbers has never been so much fun. There are only two omissions that wed like to see added for any sequels; Beavis and Butthead singing Breaking the Law on the games soundtrack, and being able to drive a Ford Gran Torino in tomato red with a wide white stripe.

If youve ever wanted to drive like a plonker featured in the likes of a Police, Camera, Action! show, then this is most certainly the game for you.

Criterion have well and truly put their mark on this series, and long may it continue. But obviously wed also like a proper Burnout game too. Until then feel free to put an APB out on this one.