For many gamers, the idea of a speed run is sheer hell; having to complete a level in the fastest manner possible, knowing that every single move is taking valuable time up on the clock.

You have to be a certain kind of sadist to enjoy that sort of pressure. And why rush a game that you’re supposed to take your time with, exploring every inch of it?

It’s ironic then that a game based on getting out of hell, expects you to do just that, or die trying. 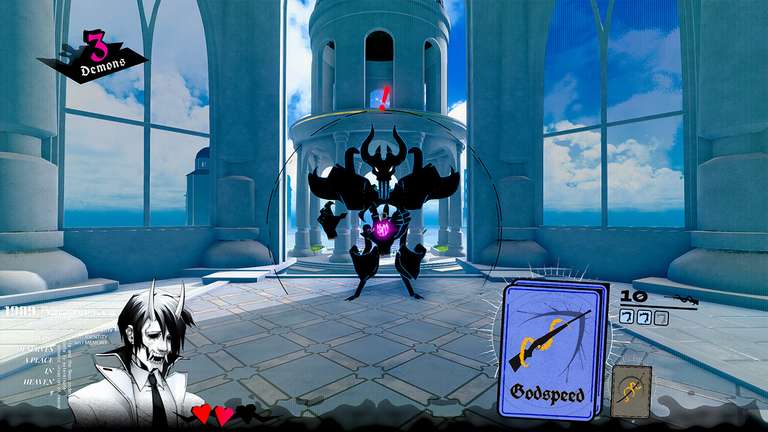 Some first dates just don't go the way you want to.

Redemption, it’s always worth a crack at if you get the opportunity. And such an opportunity has come Neon White’s way. He’s a demon assassin who has been given a mission, to clear heaven out of all the demons that have somehow found their way there. If he manages to succeed, he’ll be allowed to stay there.

Of course he jumps at the chance, but he’s not alone, as other’s haven been given the same opportunity too. He’s also hampered by the fact that he’s suffering from amnesia too, so his past actions are somewhat foggy. Still, kill a lot of demons to stay in heaven, what could be simpler? 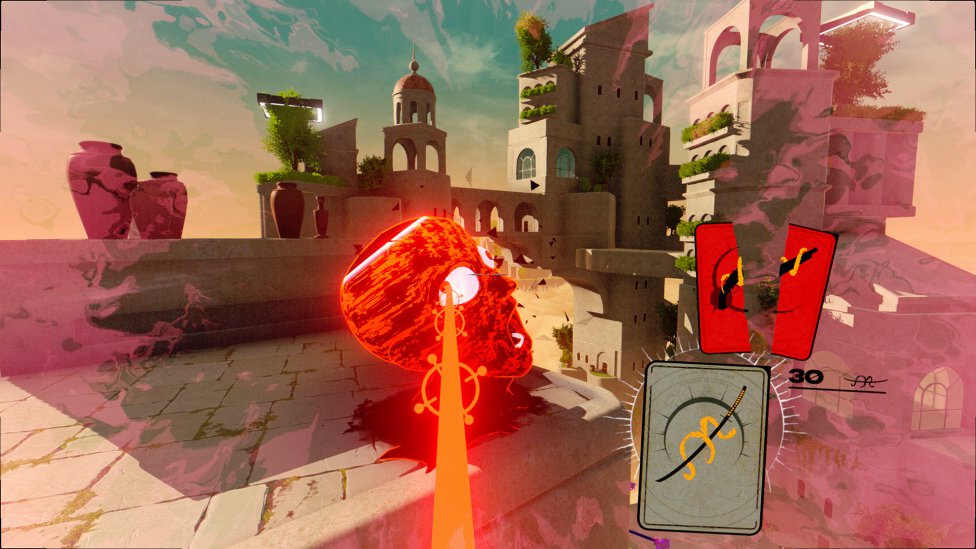 It's no wonder I get real bad migraines.

Neon White is a speed runners wet dream, as every mission is against the clock. They are impressively brief too, with you needing to complete most of them in under 30 seconds. Obviously a number of things need to be achieved during that time frame. Firstly, you need to kill all the demons on that level, as you won’t be able to clear it and enter the finish zone without doing so.

You are given a helping hand though, by way of soul cards, which can be picked up along the way, with most of them coming by way of killing demons. All the cards allow you to shoot at enemies, albeit with limited ammo. But they also have a special power, depending on the card you have. For instance, one is elevation, that when used – often in conjunction with jumping – lets you reach a higher level. Another allows you to speed through a demon killing them instantly, while another allows you to stomp on them from a great height. You can carry two types at any given time, and there will be times when you will have to switch back and forth in order to complete the level.

Although the enemies can shoot at you, they never move, making them easier targets. Get shot enough times however, and you will die. The same again if you fall off a building or platform to certain death.

And this, of course, is all against a ticking clock. And depending on your time, you will be awarded a medal: bronze, silver, or gold. If you’ve managed to excel on that level however, there is one other award, an ace medal, which means, well, you’ve aced it. You should concentrate on getting golds however, as you will need to have a certain amount of those to lower your overall rating, with the goal to go from 100 to one.

Now, as you’ve probably guessed, we’re no friends of speed runs. Perhaps it’s down to the fact that our reaction times aren’t what they once were, as well as the fact that we don’t work well under any kind of pressure. But we’re prepared to make one exception in the case of Neon White, as it’s one superb game.

Ironically one area it excels is in being against the clock. The fact is that every level is a bite size of action, that can normally be completed in under a minute. You could probably complete a number of them first go, but you won’t necessarily pick up gold in doing so. This means you may well have to spend a little more time in getting to know the level well, trying to find any possible short cuts to shave off valuable seconds. On top of being speedy, each level has a gift hidden too, and the chances of finding that and completing the level to gold level is slim to non-existent. Now they aren’t necessary for completing the level, but they can go towards opening side quests of sorts.

These brief levels also give it that addictive quality, because being they don’t last long, you’ve got that mindset of having just one more go. And then another. And another.

And in the same way, it also makes it the perfect game to jump in and out of, enabling you to get a quick gaming fix without the need for a full on session.

And although there are shooting mechanics and playing against the clock, the game is ultimately a puzzler, as certain obstacles need to be overcome to progress.

It’s this heady mix that makes for a tantalisingly absorbing experience., one that is difficult to put down.

And although it’s not exactly a great looker, the developers have clearly done enough to it to give it some personality, as well as allowing it to run smoothly without issues on the aging Switch hardware.

Another way of doing it is with some entertaining characters involved in a fairly wacky storyline. It’s all a bit silly, ultimately, but it’s entertaining enough.

Add to the fact that it has a stonking techno soundtrack, supplied by Machine Girl, and you have a truly original, highly compelling game, the likes of which you’ve never played before.

And if you’re like us and you hate speed runs, the chances are you’ll love this as much as we do, as it’s one hell of game.