The licensed game – cynics may say that it’s just an attempt to cash in on an existing character or show, using their name and likeness to attract gamers and non gamers alike. And unfortunately, many of them aren’t exactly of the highest quality, with minimum effort often put into producing them.

But you can see the attraction, after all, who wouldn’t want to race as SpongeBob SquarePants against the likes of the Ninja Turtles, Garfield the cat, and Jimmy Neutron? And you can do just that with this third edition to the Nickelodeon Kart Racers franchise. 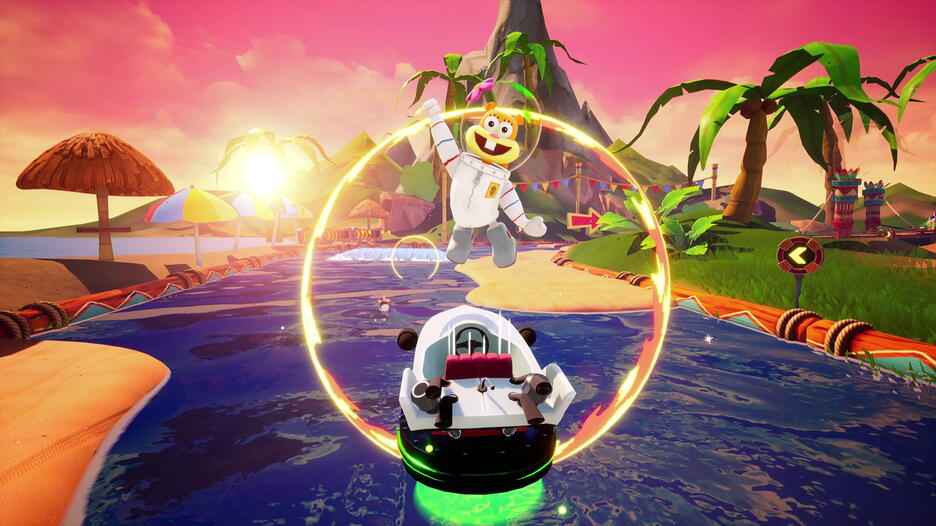 The premise, as you can imagine, is pretty basic: you choose a character, a kart or bike, then race. Of course there are only a handful available to start with, with the idea that you either win races then win extra drivers and vehicles, or pay for them with your winnings, using slime coins, which let’s face it, is probably already a stronger currency than our own pound.

But there’s a little more to it than that. Firstly, and somewhat disappointingly, very little is won from racing itself. This forces you to use the currency, and with many items being pretty pricey, it may take you while to upgrade.

For instance, we were expecting something rather substantial after completing the entire campaign, winning every one of the 36 tracks available, only to be presented with an exhaust. No really, that was it.

Another way we found of winning useful stuff was in the challenges section, but we only realised that after completing the main campaign, by which point it was less useful. So that’s worth noting if you want give yourself better opportunities before heading out to the main campaign, because all drivers and karts are not the same.

This was one of the game’s more interesting mechanics, putting together the best combo, including driver, vehicle and parts, such as exhausts and tires. You could do this before entering each cup, which, mimicking a certain plumber’s driving game, consist of four races per cup.

And that’s the thing, it’s very difficult not compare this to what is the gold standard of karting games, Mario Kart. And the fact of the matter is, it’s not in the same league, not by a long shot. So look out for the blue shells. Wait, what?!

Possibly the biggest difference is the handling; all the vehicles here don’t make for confident drives. The response is on the jittery side, to the point where you never feel you’re ever fully in control of it. The perfect example is building up boosts on skids; you pull them off exactly the same way as you do in the plumber’s game, but when it comes to the boost itself, it can take you in any direction except the one you want to go, which is a little unfortunate. It’s by no means unplayable, but just feels off.

We get it, we’ve been so spoilt with Mario Kart, but playing a game like this only goes to show how well balanced and designed it truly is.

Don’t get us wrong, this isn’t a bad game. There has been a lot of work that has gone into it, with some of the courses being wonderfully creative. And we never tired of one of the weapons, used on us, which was a hand illustration, that looks like it came straight out of the mind of Terry Gilliam during his Monty Python days, that would take up most of the screen and make driving difficult. Yes it was annoying, but it never ceased to amuse us at the same time.

There’s also a nice addition of a pit crew, which Mario could take a leaf out of their driving manual and use, which allows you to choose three different characters, with different abilities, to help you throughout the race.

And if you’re a fan of a number of these characters from Nickelodeon’s stable of animated shows, then your enjoyment of the game will no doubt increase; even if you don’t know all of them, as there were plenty that we didn’t, they’re still fun to take for a ride behind the wheel.

And although this is a title featuring a large number of licensed characters, this isn’t a lazy tie-in to make a quick buck. The effort and love that has been put into it is clear for all to see. But you need to be aware that as far as competition is concerned, this languishes at the very back of the starting grid, with no hopes of ever being in contention, especially with Mario Kart still being very much in pole position.

But if it’s some silly fun with splats and slime aplenty you're after, take it for a spin.