There are quite clearly two groups of gamers in this world: those that like RPGs and those that dont. We fall into the latter camp. Its not through want of trying; we gave The Elder Scrolls IV: Oblivion at least three hours of our life, before we cast a never to be played again spell upon it.

And like a lot of gamers, we were wooed by the splendour of Fallout 3; but we soon got tired of wandering about a wasteland and getting into random skirmishes. We can do that for real on the streets of East London, so why bother playing a game of it?

That said, we were won over by the charms of the underrated Kingdom Hearts series, in particular the 2002 original.

Seeing as Nier comes from the epicentre of all things RPG Square Enix  the home to the Final Fantasy series  we were expecting a pretty generic role-playing experience. Thankfully, we were proved wrong. 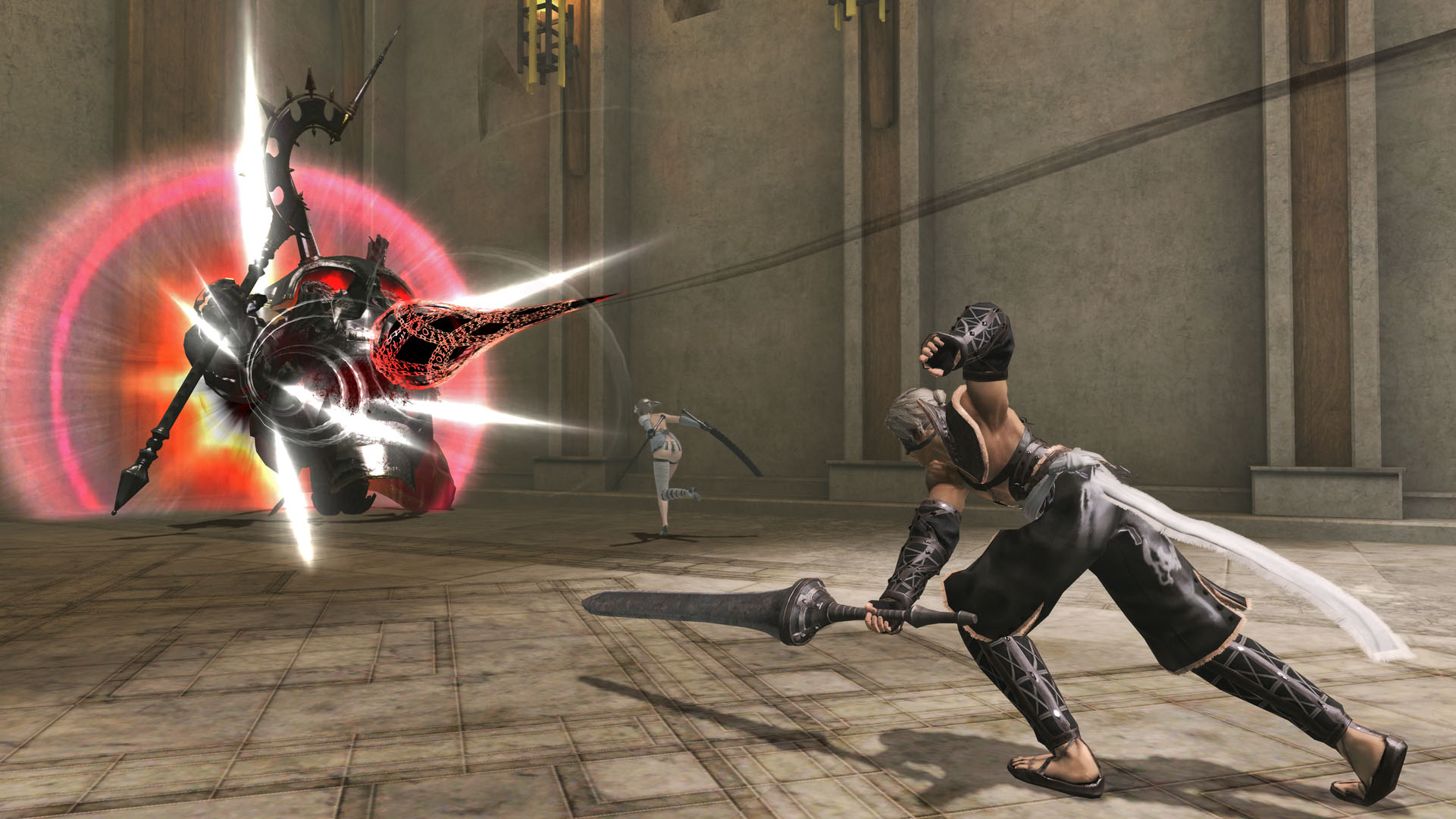 To its credit, Nier is no run of the mill RPG game. In fact, only a small element of its game play includes role-playing. What it is, is the gaming equivalent to tapas. It borrows from all types of genres, sprinkling a little RPG fun here, a smattering of first-person fighting there, topped off with a bit of old school shooter fun.

Set some time in the future, you play the eponymous hero, who is slightly older than your usual lead. He has a daughter Yonah, who has been infected by the Black Scrawl virus, which will in time kill her. In an attempt to save her, he embarks on a quest to discover a cure. To help him, he is accompanied by Grimoire Weiss, a wise, arrogant book that imbues Nier with the ability to use magic. From time to time hes also joined by the troubled, yet scantily clad Kainé, who can more than look after herself in battle.

Nier lives in a modest dwelling in a small village. Whenever he enters it to see his daughter, its interior is displayed in pleasing 2D. In fact this happens a lot with many of the rooms he enters, where only dialogue of some sort or another takes place. In certain parts of his adventure, the view changes again but this time to overhead. You would think that these changes would be jarring, but the reality is that theyre not.

The one thing you will have to get used to if you plan on playing this game for any length of time is a hell of a lot of back and forth-ing. Many of the side quests will have you going to point A picking up X and returning to B; dont be fooled by our exciting description however, as these missions are the very definition of the word mundane.

Many times your quest will see you leave the safe haven of the village and venture out yonder. Beyond the gates is what can be best described as Hyrule on a budget. The land that leads to the various cities you have to travel to is one of the most barren and poorly visualised on a console. Its reminiscent of those very basic PC games of the late eighties/early nineties. Quite frankly, its nothing short of embarrassing. 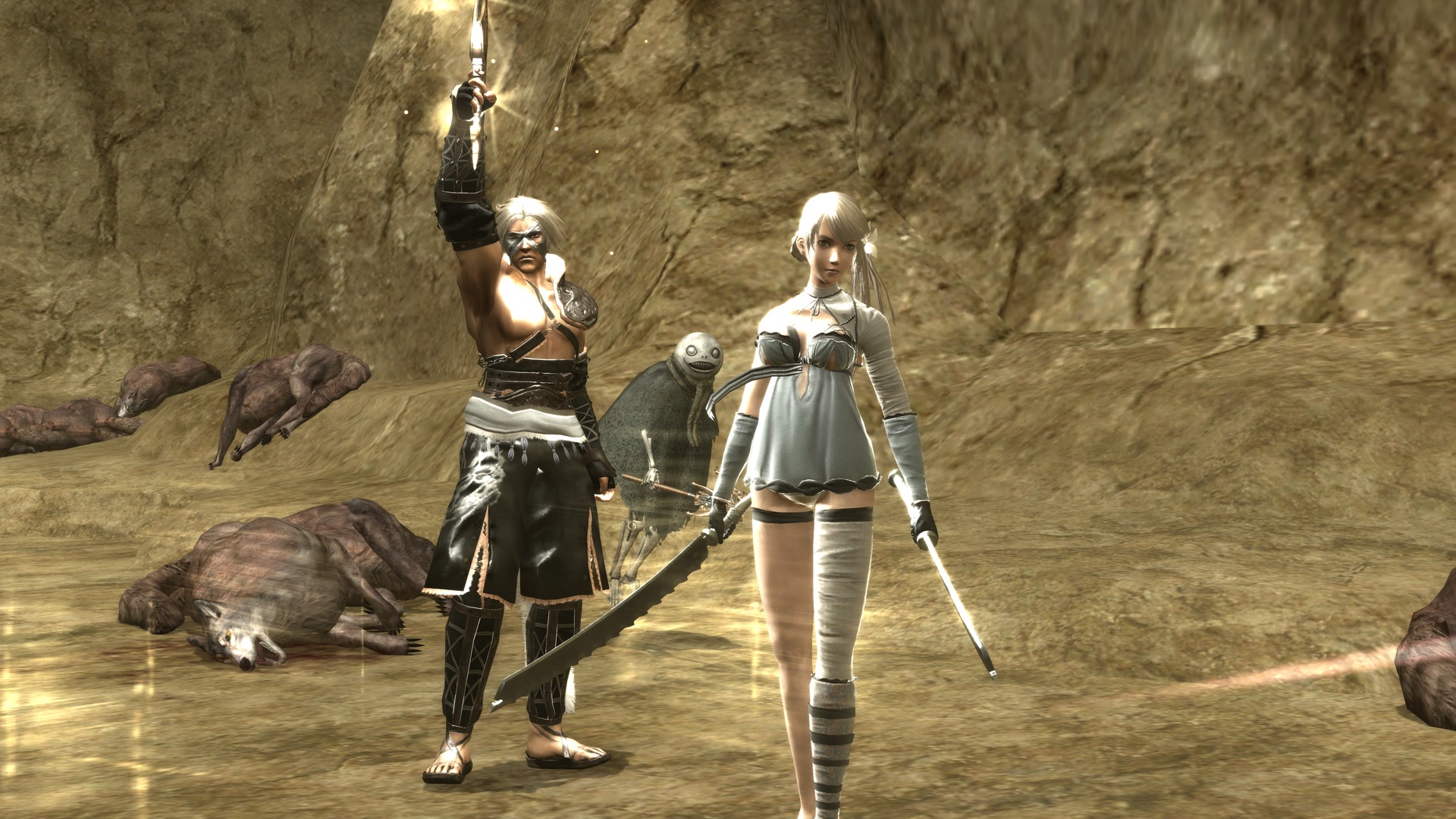 This has to be the worst. Barbecue. Ever.

In contrast however, some of the detail that exists in the cities is far more pleasing to the eye. At no point will you be overwhelmed by its beauty though.

It does seem that Square Enix has made a conscientious decision to aim this title at a slightly older audience, although its difficult to understand why. Theres some use of foul language, and Kainé appears to have more weapons on her body than she does clothes. But these all feel out of place with the overall theme of the game. None of them are at all necessary and actually feel at odds with the characters and completely redundant.

What does impress though are the boss battles. Many of them are epic and have that Zelda feel about them. This isnt the only time you get a little Zel-da vu. At one point there is an open homage to the game when your character lifts an item to the sky, accompanied by a familiar trumpeting of success. There are also quite a few quests that involve being locked in a room and having to solve a puzzle in order to get out. Also, you have the opportunity to go fishing, but the actually act of doing so is woefully disappointing; so much so that you can barely see the rod in front of you, never mind a line or any fish you might catch.

Nier simply doesnt have the same level of charm are charisma as a Zelda title. And by including aspects from other games and genres, it almost feels like a rambling compilation, as opposed to a whole game in its own right.

We also expected it to last for several days, but found ourselves at its end at a little over ten hours in. Theres more to do with many side missions, but as they were less entertaining than hiding from a Jehovahs Witness knocking on your door, we ignored most of them.

We were grateful however that it wasnt bogged down with the weight of a full-blown RPG; in places it does feel more like a fighting game than anything else, but with the Shade enemies looking all the same and a button-bashing technique for dispensing of them, it ultimately suffers from too much repetition.

A brave attempt in trying to create something different then, but sadly the sum of its parts fails to impress overall. So Nier, and yet so far.