So here it is, the other Gallagher brother's debut studio album. Whether Noel found any extra pressure, being often considered as he is as the true talent out of the pair, is unclear. What is apparent is how both bros have made a concerted effort to distance themselves from their Oasis sound. 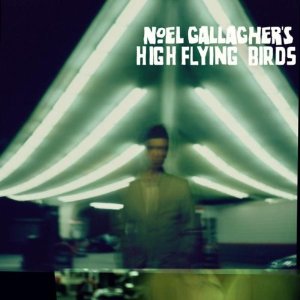 Noel gets things under way with 'Everybody's on the Run'; soft strings and a steady drum beat parade around for a bit before Noel interjects with his opening lyrics. Before too long a choir chirps in, trying to lift the track to epic proportions, but not quite succeeding. For an opening track, it just doesn't make that much of a mission statement of what's to come. Maybe it's its slower pace, or the overly soft strings, or maybe just that bloody choir that is irksome. The choir really doesn't help any.

There's almost an instant welcome feeling of slightly more cheekiness with the arrival of 'Dream On'. It feels more like an Oasis song. It's a bit jauntier, and Noel is more playful with his lyrical output. It's a little musically undressed however, and doesn't feel completely finished.

He gets a tad gushy with 'If i Had a Gun', but without resorting to full blown gushiness. It's by no means an anthem, but gets the job done. If it was written about us though, we wouldn't be that impressed, and he'd have to try a lot harder to woo us. What kind of gal does he take us for?!

Then finally it happens. 'The Death of You and Me' is exactly what you expect from this particular Gallagher. It's not too clever, but it just ticks all the right boxes. Noel's sing-songy lyrics are catchy and grow on you like a fond verruca. And then the ballsy brass section enters the equation, and just makes perfect sense.

Some children talking in a school playground is the intro to '(I Wanna Live in a dream in my) Record Machine'. Oh and he gets a little more from his choir. Joy. The track doesn't do much wrong, but it's just too formulaic to make that much of an impression. Noel stretches out the last word of every other line or so, making him sound like a proper Manc. But we've kind of heard it all before, only better.

The driving beat that pushes 'AKA...What a Life!' through the speakers is something a little different. Not better necessarily, but different. It's the kind of thing you could probably dance to, if you happen to find yourself in a disco. In the eighties. With a bad haircut and no girlfriend. If only more of this album was as original (For Noel, that is).

What's that we hear? Oh that will be the regular guitar rift that appears to be on a loop in our ears listening to this album. Yes 'Soldier Boys And Jesus Freaks' offers nothing that we haven't already heard before. It's a civilised slice of pop. But if you're looking for your world to be rocked, look elsewhere.

Virtually all of the above can be said for 'AKA...Broken Arrow', so there's no point in wasting valuable words on this.

Fast approaching the end, and there's now no chance of being blown away. '(Stranded On) The Wrong Beach' unsurprisingly fails on that front, but its seventies guitar riffs strike the right chords at least, promising a hint of something different. They even have their own solo, which is nice.

The end is now nigh with 'Stop the Clocks'. It's a fitting end to this album, but that wouldn't be too difficult. It's balled-like, with a little extra oomph for good measure. Too little too late however.

It's difficult not to come away from this whole experience feeling underwhelmed and disappointed. With everything that Noel has supposedly gone through with his sibling, there's an expectation of sorts that he'd come out on his own with a point or two to prove. 'Who's the better Gallagher? Why I am!' sort of thing.

What he's delivered, sadly, is nothing of the like. It's as if this album was a homework assignment he wrote only minutes before handing it in. It's safe and reliable, with no surprises whatsoever.

There's no denying Noel's talent, but this isn't the two fingers up at Beady Eye we were hoping for. Shit, what if Liam was the talented one all along?...