Make America great again. That was the slogan. And despite those words coming from the most heinous of individuals, there is a truth there. The US of A was indeed great, but in becoming so, it was often at the expense of those not so well off. So while the rich kept on getting richer, well, the poor suffered.

And although this film is set in 2011, under the leadership of questionably one of the better presidents in recent US history, Barack Obama, certainly its themes are just as pertinent now, particularly with the global economy suffering at the hands of COVID.

Director Chloé Zhao’s film then isn’t just a snapshot in time, but more an indictment of history, as it explores those who haven’t yet fallen through the cracks, but just about exist between them.

So I told Tiger if he didn't move out of the way, I'd run over him!

When the US economy takes a hit, America feels it; not so much the big cities, but the smaller towns, some more than most. Take Empire, Nevada. In 2011, when there was less of a need for sheetrock, the company that made it there was forced to close. And with it, so did the town itself, pretty much, causing massive unemployment.

One of those that was forced to leave her home was Fern (Frances McDormand). Not only did she have to deal with the loss of her job and home, but also her husband, who recently died. With absolutely nothing left, she found herself living and travelling in a converted van, looking for a place to stay awhile, work a while and live a little.

It was on the road that she discovered that she wasn’t alone, that there was an entire community who had been let down by society, one way or another, and found themselves on the road, looking for somewhere to park up and call home for a bit.

Driving from one camping area in the desert to the next, she not only befriends these self-titled nomads, but becomes one of them, embracing their lifestyle, as she continues her journey of discovery. 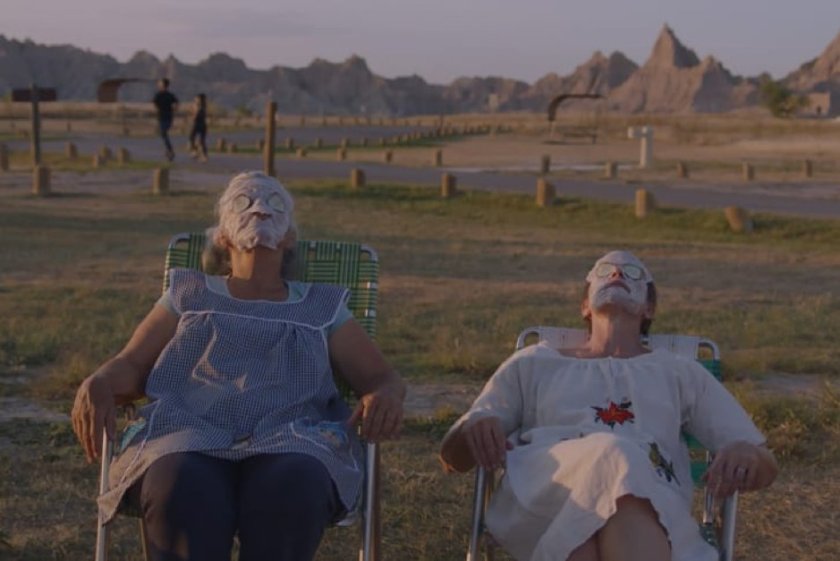 You would be surprised how much dead skin the gulls would remove when they arrived and tucked in.

Chinese director Zhao has certainly come a long way herself, in such a short period of time. With only two other films to her credit, her 2015 debut Songs my Brothers Taught Me and the beautiful 2021 The Rider, this her third film picked up all the biggies at the Oscars: Best Film, Best Actress in a Leading Role, and Best Director. And it has to be said that it deserved every single one of them.

Nomadland follows the style of her other features in being a quiet, thought-proving piece of film. At times you could be forgiven for thinking it was a documentary, especially when you consider that the acting doesn’t feel like acting. Much of that can be down to the fact that most of her cast here aren’t actors at all, and are actually real people, with real stories to tell. In that sense, McDormand’s Fern is nothing more than a conduit for their stories. It just goes to prove how good an actor McDormand is when she manages to almost un-act her way through the film; Fern is certainly a woman who wears her struggle on her face.

The journey is a shared one; Zhao manages to make the audience become a silent passenger on the trip, as Fern goes from camp to camp, working any job she can to get by, and enjoying the company of like-minded travellers. It’s a world that may at first cause alarm just at the thought, but as Fern’s van clocks up the miles, there’s something almost appealing about this way of life, cut off from a civilisation struggling with everything around them.

It’s also a journey that feels like it never ends, with its main protagonist always moving, even with what seems like a decent opportunity comes her way. Perhaps it’s a lifestyle that she learns to not only exist in, but embrace, and finally feel a real sense of freedom, in a world where very few really know what it is.

To some it may come across as nothing more than professional camping, of which there’s probably a case for, but it reveals what many would consider the underbelly of society, only to reflect, perhaps, who are the ones that are really better off here exactly?

And if Zhao is likely to bring any of her previous themes to her next film, Marvel’s Eternals, we should all be in for quite the journey ourselves.

Nomadland then, is nothing short of a phenomenal piece of filmmaking.