It did well enough to spawn two sequels, with the last one released in 2007. An all female version sounds like the logical next step, so the only surprise with this release is that it’s taken so darn long. 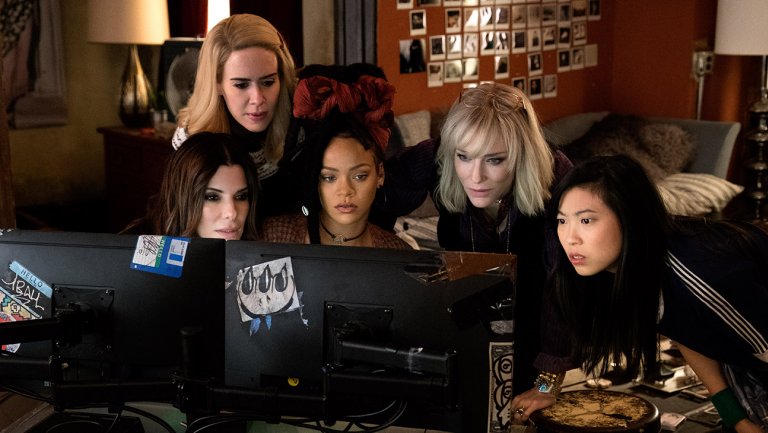 Damn it they're right, all the other Ocean's films are better than ours.

After spending just over five years in prison, Debbie Ocean (Sandra Bullock) has had a lot of time to think about what she’s done. Or to be more accurate, what she plans to do next, which is an audacious heist.

She knows she has no chance of doing it alone so, learning from her brother Danny, she recruits a highly skilled group of criminals, who all happen to be women, to pull off a most daring job. So along with Lou (Cate Blanchett), Amita (Mindy Kaling), Tammy (Sarah Paulson), Nine Ball (Rihanna) and Rose (Helena Bonham Carter) and the others, they set about stealing a necklace worth $150 million from actress Daphne Kluger (Anne Hathaway), when she attends the social event of the year in New York City, the Met Gala.

No one was keen to admit that it was actually them who delt it.

There’s a certain irony to this film where the priceless item represents Soderbergh’s original film and this effort represents the fake replacement; it may look to the untrained eye like an Ocean’s film, but the longer you stare at it, you realise its missing one key element: sparkle.

Ross, who also co-wrote, doesn’t appear to understand the formula for any heist film, and that is that it must contain some form of peril. There must be a number of times where you feel that the team are either going to get caught, or an unexpected spanner is thrown into the works, putting the whole plan in jeopardy. This film has no such peril.

It’s disappointing that, for the most part, an impressive array of female talent has been brought together, with the likes of Bullock, Blanchett and Kaling in particular, being sorely underused.

The script is flat, and humourless for the most part, with only Hathaway and James Corden supplying much-needed light relief, albeit all too briefly.

The problem is clear: Ross is not Soderbergh. It’s only his fifth film behind the camera, and with his last hit being 2012’s The Hunger Games, it feels, quite frankly, that he was the wrong man for the job.

A great cast then, sorely put to waste, leaving one question: what would have Soderbergh done?

Far from a gem, more of a disappointingly pale imitation.