Although to body shame anyone or thing over their appearance is never OK, it has to be said, that a rare exception could be given to the inhabitants of the Oddworld franchise, who are undeniably butt ugly.

Our first introduction to this very odd world indeed was in 1997 with Oddworld: Abe’s Oddysee, that appeared on the PlayStation, Game Boy and PC.

24 years later and our somewhat unattractive hero returns in what is not only the sixth entry in the franchise, but the most head-scratching, brain-melting adventure of them all. 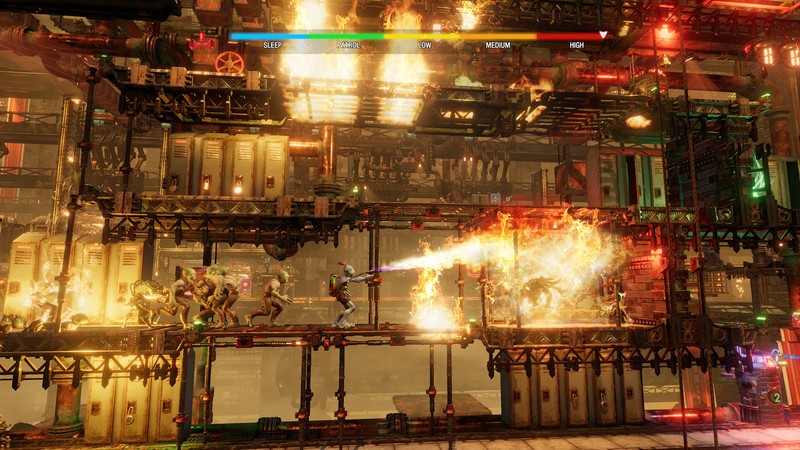 Whoever had the spicy chicken - I told you so!!!

Over the years, the race of the Mudokons has had it pretty rough, being held in captivity as slaves to do the bidding of others. And there’s no change here, with things looking really rather bleak. The company that owns them, RuptureFarms, have discovered that they actually make an excellent ingredient in one of their tasty meat treats, so decide that harvesting them would make good business sense.

As you would expect, this doesn’t go down to well with the Mudokons, and they feel that only one of their kind, janitor-turned-hero Abe can save them all. More out of a sense of not wanting to disappoint rather than any show of heroism, Abe decides to give a go, and do the best he can to save his people. Bless.

Oddworld: Soulstorm is a game that manages to straddle both being a platformer and puzzler, in equal measures. It’s presented in an impressive 2.5 dimensions, which it utilises perfectly, as you control Abe traversing the world from left to right to left, jumping up and down to platforms throughout. Thankfully, and trust us you will be thankful, there are plenty of save points along the way, triggered by you passing them, with the passing of each one occasionally feeling like a big win and a miracle.

Thanks to the physics of the game, which for the most part are excellent, the game can get the better of you, as it did us. We were in a fairly tricksy area, the blimp, where we were reaching the end of a section, but was taken out by a missile, that knocked us off the edge of the platform we were standing on, to the ground below. The good news is that it triggered the next saved point; the bad news is that said save point was surrounded by weaponised enemies, who took huge glee in taking us out. And as Abe has no hand weapon as such, they took him out. A lot. It was a vicious Groundhog day as we spawned, died, repeat. The only thing to do was to restart, the problem being, you’re not given the opportunity to respawn at a previous save point, only to restart the entire level again. It’s no wonder that the Blimp level took us over two hours to complete. But to be fair, most of the levels do. The amount of save points certainly help so that you don’t have to sit there and do a level all in one go, unless you’re that kind of gaming sadist, of which we know plenty exist. Just not us. 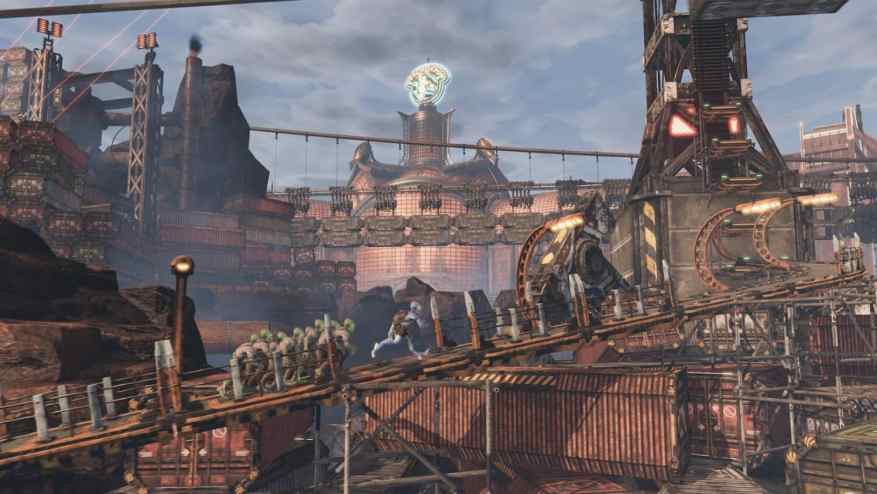 I know that the last twelve McDonald's have been closed, but trust me, the next one will be open...

In that sense, it’s not a game you can dip in and out of, even if that’s your intention. A warning to you that you should heed is that it can be incredibly addictive; the developers, all of whom spawned from Beelzebub without a doubt, such are their evil ways, have peppered the game with a just-one-more-crack-at-this-section mentality. Part of this is probably due to the regularity of you dying. It happens so frequently, that you just want to jump in and get it done this time. Even knowing the path ahead doesn’t guarantee anything, as there can always be a surprise that pops up along the way. Thankfully the game benefits from the Sony help aid, which can be called up at any time playing, where you can watch video walkthroughs that may just help you. Again, there’s no guarantee that they will – for instance we called up the one for the Blimp section, and the video played through the route, but left out all the enemies and hazards along the way, which wasn’t super helpful – but the fact you don’t have to immediately call up YouTube for a walkthrough for assistance necessarily is a nice touch.

You can tell that the developers had a lot of fun in the design of the game, as they have gone to some length in the variety of levels and what has to be achieved in them. Although Abe has no hand-held weaponry to protect himself, he can use objects – and then potentially craft them with the right ingredients – he picks up along his travels, such as mines.

One of those most effective and entertaining methods however, is his use of mind control. He has the ability to chant, create an energy ball that, if within its radius, can take over and control an enemy; at this point Abe can either get the enemy to shoot his comrades, although they will shoot him back, or simply make the controlled enemy explode. Unfortunately, even if he is surrounded by colleagues, he will only take himself out, but at least it’s one enemy down.

It’s also when Abe is chanting that the controller’s speaker springs to life, with his mantra echoing from your hands, along with a number of other vocal commands he has, which is a nice touch.

It can feel at times however, that perhaps Abe has too many options at his disposal, but most levels try their best to limit the sensation of being overwhelmed.

Although the world isn’t exactly a world of colour, especially in the many mine sections, where the levels are starved of light as well of colour, the game has a grotesque beauty about it. Sure, much of the physical landscape is an uninspired brown, but with the 2.5 world, things like missiles being shot at you whizzing through the sky, to the animation and quirky design of all the characters designed, make for an oddly attractive world to explore, of which there is so much exploring to be done.

Oddworld: Soulstorm is also the type of puzzling title that is likely to delight and infuriate in equal measures. Actually scratch that, it’ll definitely infuriate more, but it’s unlikely to stop you from wanting to progress.

Also, there’s a likelihood that some will breeze through some levels with the ease of a speedrun, where others are likely to stumble. Of course some of this will be down to personal experience, and the physics of the game will come into play for all at some point.

It’s a game that visually looks like it belongs to this new generation, even if it’s only currently available on Sony consoles (both PS5 and PS4, as well as PC), but its game play, which feels almost unique in the current console landscape, definitely harks back to PC gaming of old, to the likes of the classic Lemmings. Either way, it has the ability to give a welcome hit of nostalgia to older gamers, while offering newer gamers a style of game that may be refreshing to get to grips with.

At times Oddworld: Soulstorm may well find you turning the air blue with a tirade of expletives, which ironically could be the only colour you see in the game, but it will undeniably have you coming back for more. It’s a game that will always have you wondering what’s just around the corner for you and for Abe, in this odd but hugely compelling and enjoyable world.