You know a gaming franchise has been around the block when it had titles released for the WonderSwan – a handheld produced by Bandai in Japan in 1999.

But despite a number of games released, One Piece is a franchise little known outside of Japan, unless you know your hardcore manga, where it started life in 1997. It has been so successful – in Japan at least – that it spawned an animated TV show in 1999, airing over 1000 episodes.

This Japanese RPG then, is somewhat of a curiosity, and begs the question, is it worth playing if you’re completely unaware of its history? 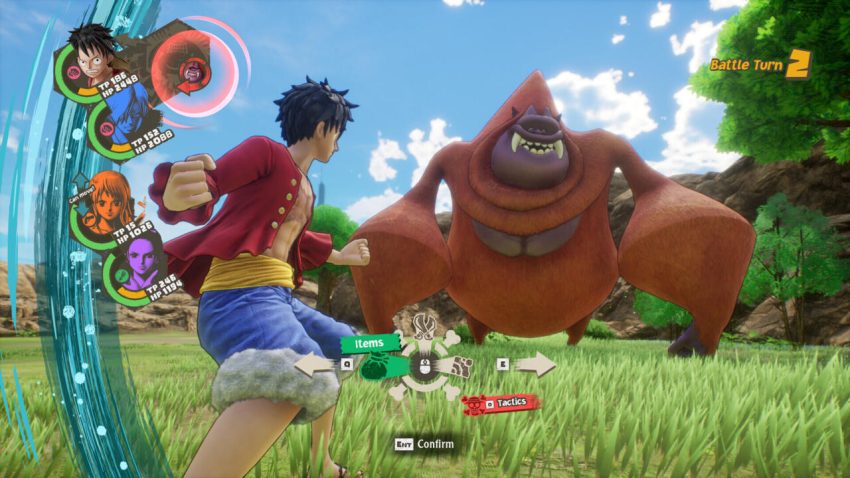 Listen are you gonna monkey around, or are we gonna have a dust up?!

Washed up on a mysterious island are the Straw Hat Pirates, lead by their rubbery leader Luffy. After a little exploration they come across Adio and Lim. They explain that they have actually ended up on the island of Waford, and then go about stealing their powers and putting them in a cube.

Lim isn’t a fan of pirates, which is why she has taken their powers away, which annoys the crew. But there is a way of getting them back, but it won’t be easy, as it involves them having to explore Memoria, a world built from their memories.

They decide then that that’s what they must do, although it’s not as if they have much of a choice, not if they want to get their powers back at any rate.

So off on a great adventure they embark, in the hope of being the all powerful Straw Hat Pirates once again. 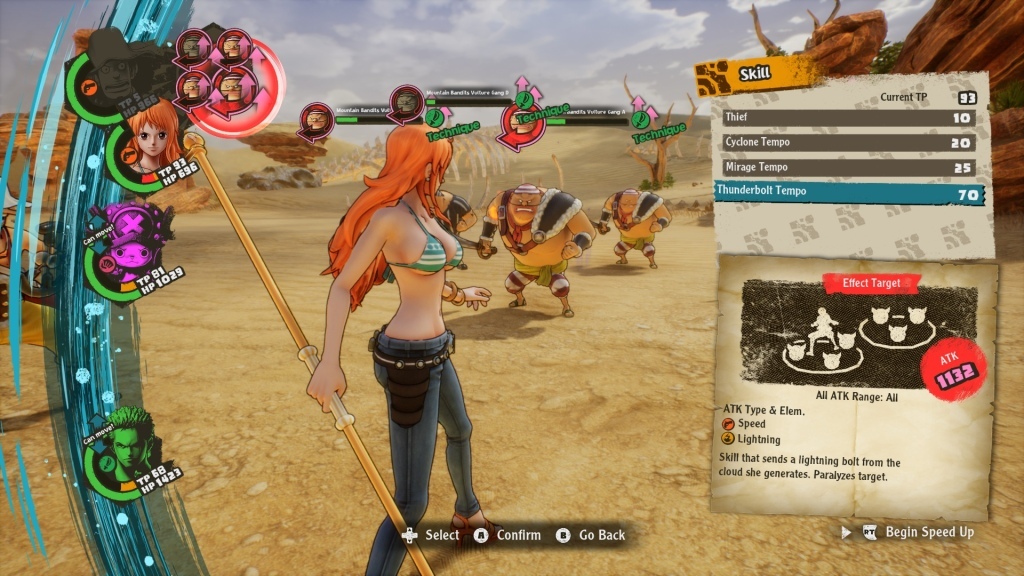 Look, I told you guys my dance card was full, here's the proof!

With no knowledge of any back story, we embarked on this adventure ourselves. And it has to be said, it’s hugely entertaining. As far as we can tell, it certainly stands up as a standalone game, one that can be played with no prior awareness of either previous entries in the gaming franchise – of which there have been many – or the manga comics or TV shows.

It is a world that is both colourful and sunny, and certainly a perfect tonic to the winter blues, adopting a fairly cartoon-like art style throughout. Everything about it is over the top, from the characters themselves, to their voices which are all delivered with gusto in their native language of Japanese.

And if you’re familiar with the party mechanic of JRPG’s, you’ll be right at home here. And if you’re not, it’s very easy to pick up.

In fact, all elements of battle are fairly easy to get to grips with, which also include some nice touches. For instance, you can change out your team on the fly, without being penalised in any way; so if you have a character in your team that fairs better against a foe you’re currently facing, just swap them in for one that isn’t.

And of course each character has their own specific powers, which can be upgraded along the way, by discovering cubes specific to that character. Collect enough of them, and you unlock the next level of that power.

The only issue about the characters is a recurring one, sadly, especially where JRPG’s are concerned, and that’s with the depiction of women; Japanese developers really need to get their act together and understand that it’s not OK in this day and age, to have female characters in small bikini tops with large breasts, as there is no room for the sexualisation of women in gaming any longer.

Another welcome addition however, is the ability to unlock joint attacks by certain characters, which unleash a far greater attack. If you have all of them in your party, and they have enough on their meters to provide the attack, you can let rip in a satisfying fashion.

So with so many variations in battle, fighting can seem less of a chore, which is always a bonus.

Another bonus, that RPG purists no doubt will frown upon, is that when it comes to levelling up, all members of your team get levelling up points, even if they aren’t in the fighting line up at the time. This really helps say, when one of your party is struggling, you can swap them out with another who is on a fairly equal level overall, so you’re not necessarily losing out in anyway.

It’s a game that also isn’t all about the grind either, as there are some interesting puzzle elements, quite Zelda-like in places, that will force you to use some grey matter in cracking them

As we’ve mentioned previously, the RPG genre is only one that we’ve found ourselves getting into fairly recently, and we found this one most accessible to play from the off, and again, that’s without knowing anything of its history.

It’s a game that doesn’t take itself too seriously, in a cartoon world that is just a joy to explore. Some may find that it’s difficulty level may well be on the easy side, which is a fair appraisal overall, but we still had some boss battles that were a slog to get through, that still gave us a sense of satisfaction from getting past them.

A warm and wacky JRPG then, with an intriguing story and some truly colourful characters, that makes them the perfect pirates to join on their impressive adventure.