Theres something wrong with Esther. So the poster goes for this so-called horror flick. For some curious reason though, a second line was dropped from the ad. It read: And theres a shed load more wrong with this film too. Understandably it wouldnt encourage a big audience, but its certainly accurate.

The main problem is this  its not very scary; which is a bit of a let down for a film selling itself as a horror title. 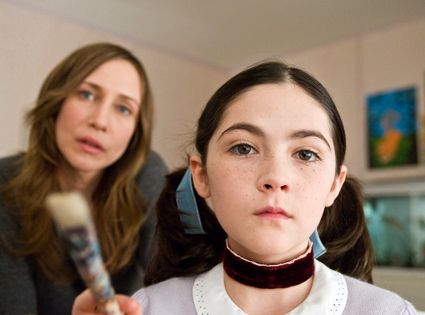 Look, I got so bored in this damn film, I painted my own freckles on, you like?

Since the loss of their baby in child-birth, instead of trying for another, they decide to adopt. Enter little orphan Esther (Isabelle Fuhrman) into the family fold. Esther is a loner; this is due to the fact that she dresses and sounds like an Amish vampire, who suffers from the occasional Scottish lilt.

Having only been under her new familys roof for a short period, strange things start to happen in the household. Coincidence? Dont be daft. Esther is indeed an evil little minx, but with a deep, dark secret.

Once this secret is finally revealed towards the end of the film however, it has about as much impact as if she had just declared that she has an eating disorder and/or a nut allergy. Chances are it will either make you laugh out loud or simply scratch your head in sheer bewilderment. Either way, its not the desired effect you want from the film.

With only two other directing credits under his belt (2005s House of Wax, and Goal II: Living the Dream), Jaume Collet-Serra struggles on virtually every front to make Orphan work. The films two writers have also never written for the screen before  and boy, does it show. They obviously sat down, drew a couple of rude doodles on a pad, then watched a couple of The Omen films. Their cinematic eureka moment must have come just as the credits on Damien: Omen II rolled  hey, what about a story about a satanic sprog, I dont think thats been done before, right?

It saves on being original, naturally, but at the same time suffers from wasting two hours of your valuable time. Even if you didnt think that your time was all that precious, watching a slug crawl along your garden path would be hugely more entertaining  and less obvious  than this.