As owners of PS5’s and Xbox Series X/S are all too painfully aware, new games to play on their next-is-now generation of consoles are thin on the ground. And new original IP’s even thinner still.

Of course a global pandemic doesn’t help, nor does the fact that bot scalpers are using their evil special powers to buy up every console within milliseconds of them going live on websites, only to then sell them on at extortionate mark-ups. If this scenario makes you mad enough to want to shoot stuff, well, you might be in luck.

Developers People Can Fly have probably read the room correctly, offering as they do here a third person shooter, with RPG overtones. 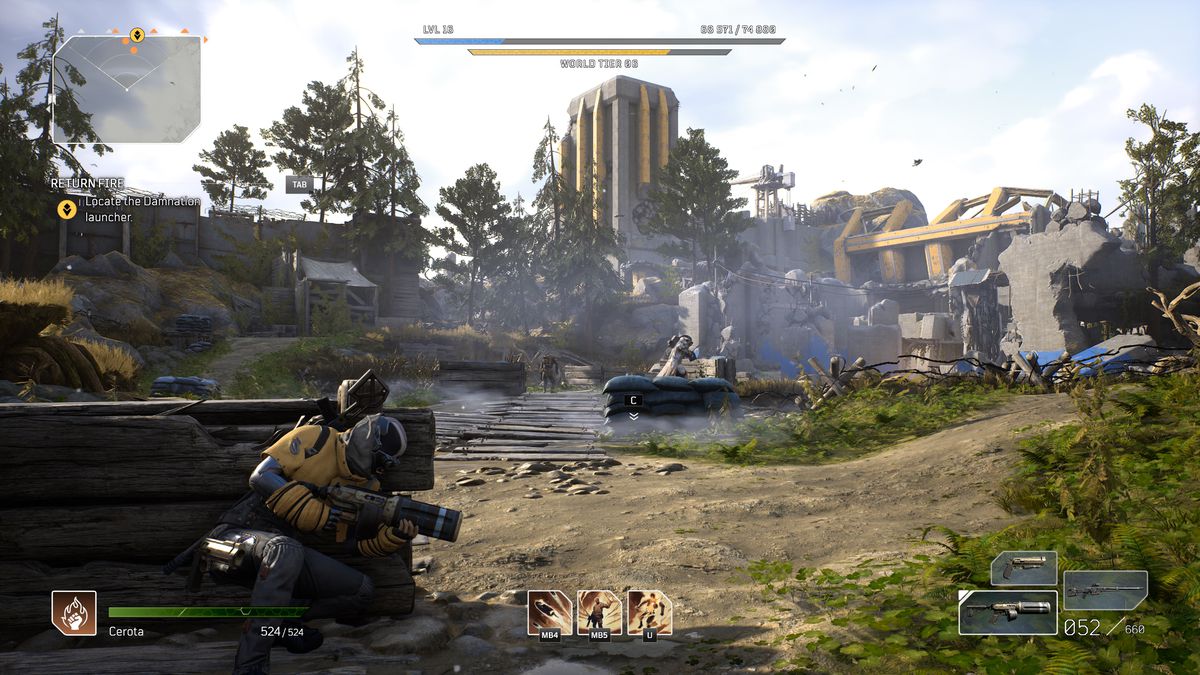 If I just hide here for an hour or so, maybe they'll just get bored and bugger off...

As expected, the people have Earth have raped the natural resources of the planet, as well as contributed to its demise with various man-made products. The time to fix it has long passed, so there’s only one thing left to do: leave it to die and go find another planet to colonise and destroy with non-biogradable toothbrushes and batteries.

The lucky planet is Enoch, being the closest to Earth’s atmosphere and eco-system. Arriving first are the Outlanders, an elite band of soldiers given the mission to scout the planet, with the plan to give the thumbs up for the arrival of the colonists behind them. And although initially things look promising, they soon discover the Anomaly – a massive energy source with the power to kill, which certainly won’t look appealing in the brochure.

When they decide to pass on the bad news, another army faction decides that they can’t let them, so wipe them out. All except one. They survived due to the Anomaly having a strangely positive effect on them, which prevents them from dying. In an attempt to keep them alive, they’re placed in a cryogenic chamber, until they can offer medical attention.

31 years later, and they wake up, only to find a lot has changed on Enoch, and not for the better. Now souped up with the energy from the Anomaly coursing through their veins, they are now known as Altered, and are expected to kick all kinds of ass and not even bother taking names later on this hostile planet that’s now home. 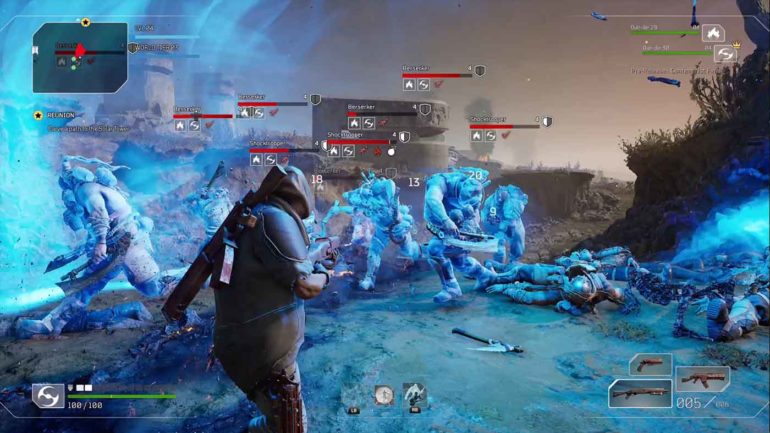 Although a brand-spanking new IP, Outriders is far from an original concept. It's a hybrid third-person shooter, that borrows heavily from a certain Gears of War franchise - which is no surprise when you learn that People Can Fly helped Epic Games out on a couple of the GOW titles – with its cover-run-shoot mechanic adopted here. It’s welded onto an RPG element, that resembles that of Destiny, to the point where it should have been called Gears of Destiny, but that may have led to some awkward conversations with lawyers.

It may not be original, but these two elements work surprisingly well together. It may well be praised for its co-op up with friends, as well as match up with strangers online abilities, but it also has a solid solo player campaign. If you can find it that is, as it’s not immediately obvious from the options section. But once you’re in, it’s time to shoot stuff.

Before they let you loose, you have a decision to make in which class to choose, of which there are four to pick from: Pyromancer, Devastator, Trickster and Technomancer. Of course each has their own unique abilities, with one of them hopefully covering your particular style of play. We chose Technomancer, who can use turrets and other goodies.

As far as the third-person shooter element is concerned, it’s brainless fun. You enter an area, and you can’t progress until it’s been cleared of the enemy. They shoot at you, you try your best to shoot back. Simples.

To its credit, there is a nice, varied selection of enemy to kill. One of the more tricksy baddies are the snipers, with their red laser sights hunting you down at every opportune moment. It’s not a bad idea to take these out as soon as you can, as they can be a pain. And as well as human baddies to contend with, there are also various domestic creatures that aren’t best pleased to see you either, which gives the game some extra variety.

During battles, all you really have to do is shoot. A lot. And you don’t have to worry about running out of ammo, as dead enemies leave lots of it behind, and there are a few handy ammo boxes in the level for you to restock.

Your weaponry is the standard trio layout of handgun, machine gun/shotgun and sniper rifle, all of which can be swapped out for all the weapons you find along the way, from loot boxes, to various weapons also being left behind by enemies. The deeper you go into the game, the higher level of weapon you can pick up.

On top of that, you also have your character’s altered ability that can be used in battle. For instance, the Technomancer has the power to use ice blasts against close up enemies, which can freeze them, or destroy them instantly. And with a number of the baddies that rush at you, you will use it often. Our only issue with it however, is that there’s no opportunity to upgrade it, and considering how important it is as a story line, is both a little unfortunate and underwhelming.

Your class allows you to use three special skills, that again can be swapped out with others available the further you level up. For us, these were the key to progressing, and certainly defeating the beefier enemies that crop up in every level. 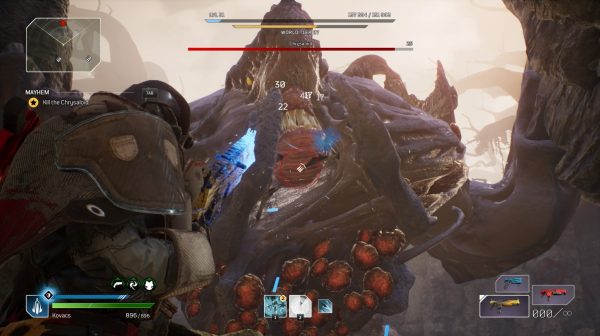 Oh man, he definitely had three Weetabix this morning.

And it’s with the RPG part of the game that makes it a little more interesting. First off, there’s the levelling up process, which is fairly standard. The higher the level, the higher the level of weaponry open to you. But on top of a personal levelling up process, there’s also a world tier system in play, that’s like a changing difficulty level. When you level up here, you are also rewarded, but there may reach a point, where the difficulty level is ramped up so much, as it did for us fairly early on ashamedly, you can just stick at a level you’re comfortable with.

You also have the ability to add skills to not only your weapons, but your clothing too. Again these can be swapped out at will, until you find a combo that works for you.

Unlike the action sections of the game, you can actually spend a fair amount of time tinkering with all manner of things regarding your weapons, clothing and skills, which give the game a welcome extra depth.

It also has a little surprise up its sleeve. After a number of hours of playing, reaching a not too shabby level 13 of the game for our player, you suddenly have access to crafting, which we didn’t even think the game had. It feels a little odd to leave it so late in the game, particularly as most games introduce it from the off, but there’s something quite satisfying about adding a further element in just when you think you’ve got to grips with it.

With its brainless shoot and run mechanic and its fairly weighty RPG element, Outriders is a surprisingly balanced experience, which is really enjoyable to play.

Of course it has its issues. Even though it’s available on both the Xbox X/S and PS5, it’s not a stunning game to look at, but it does the job. The story and the dialogue are no award winners either, but they set the scene and that’s all you ever need. It’s also a little glitchy in places; in one area, despite clearing it of enemies, the door to the next section refused to open, so it had to be replayed again. We also found an NPC in a camp area, pissing against a wall, floating two feet off the floor, which you don’t see every day.

One of the biggest issues is actually being able to play the damn game, with servers seemingly being crushed by demand, no doubt much of that due to it being available on Game Pass from day one. Although the game downloads over 40 GB to the SSD, even playing solo you have to connect to the server to play, which is both odd and annoying.

It’s by no means a classic, but Outriders did take us by surprise, as we didn’t expect to enjoy playing it as much as we did. Love to play in fact. It feels like a timely release, when gamers just want to shoot stuff. It’s hybrid game play is however is hugely welcome, offering a little weight to what is essentially run and gun simplicity itself.

This won’t be a popular view, but we actually preferred it to the Gears of War franchise, which has struggled to offer anything new over the years for some time.

With such a grim schedule for new releases across all platforms, Outriders is tremendous, brainless fun, sprinkled with some RPG juiciness to keep things interesting. It’s not an outstanding title by any stretch of the imagination, and yet it’s one difficult to put down, as you want to clear out just one more area. And you can’t really ask more from a game than that.

If you’re a fan of third-person shooters, Outriders will be a difficult title to ignore, especially if you have Game Pass, and nor should it, as it offers hours of senseless shooting, adding up to a remarkably satisfying experience, making it a real blast to play.