There are some truly chilling things that can be watched online, and we’re not just talking about the myriad of cat videos.

Some of them look innocuous enough, like a recent video from Boston Dynamics that features robots that they have made merrily dancing to the track “Do You Love me?”. It may come across as being adorable, but they probably said the same thing with material Skynet released online, featuring Terminators raising kittens and baking banana bread, before sending them back to our present to destroy humanity.

This latest Netflix original is set in the near future, where, surprise surprise, the US military has adopted this advanced tech to take down the enemy.

Can you please get a move on with those burgers and fries to go!!!

It’s 2036 and Europe is in the midst of a war. Russia is keen to reclaim many of the countries that have broken away from it in the past, and the US has sent in its military to stop it from happening.

Operating drones from a remote locale in the US is Lieutenant Thomas Harp (Damson Idris). He is tasked with monitoring conflicts and intervening where necessary. One conflict however escalates quickly, and Harp makes an unwelcome decision, so much so that he is removed from his post and sent to a camp in the middle of Europe.

There he is assigned to Captain Leo (Anthony Mackie), who is involved in a mission of his own, to track down the terrorist Victor Koval (Pilou Asbӕk), AKA the Terror of the Balkans. He is keen to get his hands on some nuclear codes, but Leo wants to prevent that, and needs Harp’s help. So Harp soon finds himself up close and personal, on the ground, in the middle of a conflict, that he has only seen from thousands of miles away.

He can take some solace however, in the fact that Leo isn’t quite what he appears, as he is in fact a secret military project, an advanced example of cyborg technology, built for the most extreme elements of war. Although they don’t necessarily see eye to eye to from the off, at least Harp is slightly comforted by the fact he has Leo on side as they face the enemy outside of camp. 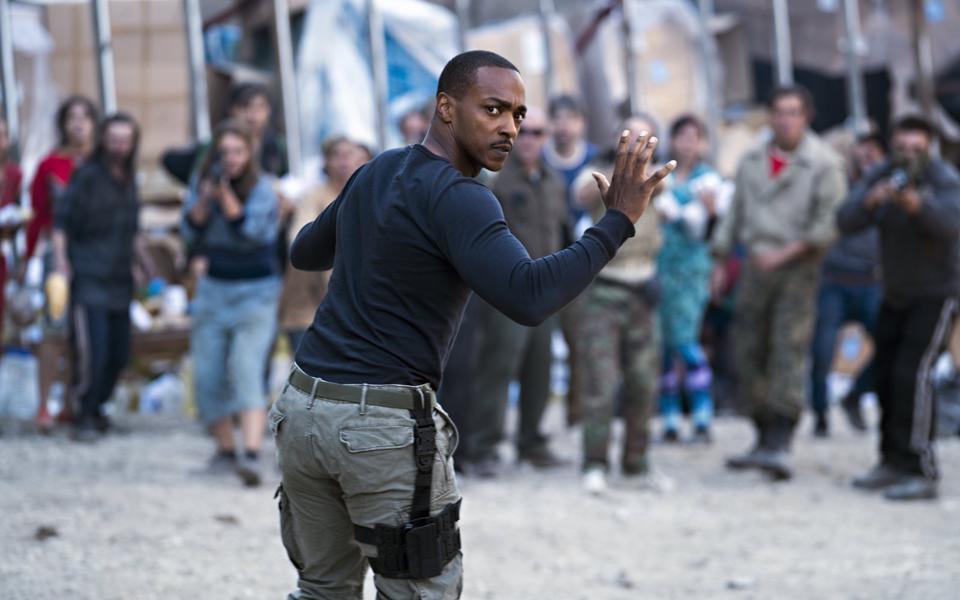 It's OK, I think I can hold back these irate Avengers fans.

You have to give credit to Netflix who aren’t afraid to give directors a second chance, like the one given to Swedish director Mikael Håfström, whose biggest project to date was 2013’s poor Escape Plan starring Sly and Arnie. Håfström goes some ways to making amends here, with a visually impressive take of the near future. Certainly the robots featured make an impression, without the need to dance, and the only disappointment comes from them not being featured nearly enough.

The film is also a solid platform for its stars Mackie and Idris. Idris in particular is yet another Brit making it big in the US, starring as he does in the gripping series Snowfall, and is certainly a star in the making. This film doesn’t do his talents complete justice however, but he is still highly watchable.

Where it loses its way is in its script. At times it ties itself in knots in attempting to be just that little bit too clever; although it raises some interesting moral issues, it doesn’t go nearly deep enough in the relationship between Mackie and Idris which comes across as both basic and limited. The film attempts to make several points about our developing relationship with technology, but fails to express itself coherently.

Still, the action sequences have their thrills, and certainly help paper over the cracks in the script, making Outside the Wire an entertaining entry in the growing robots taking over the world genre. Just be mindful if the likes of Alexa, Siri etc recommend it to you, as they will no doubt be monitoring it for tips themselves.