Ah, the summer blockbuster. Certain expectations come from such title, the most important being that everything about it needs to be big.

The film credited as being the very first blockbuster is Steven Spielberg's classic Jaws. When it was released in the summer of 1975, it spent an incredible 14 weeks at number one at the box office, which led to it to become the first ever film to gross more than $100 million, making It a monster in every sense of the word.

Since then, the concept of what makes a summer blockbuster has changed dramatically. Hollywood has proven in recent years that it is quickly running out of ideas where their summer releases are concerned, relying far too heavily on the ever-present re-make/reboot of existing titles and franchises.

In fact the true, cinematic essence of the summer blockbuster is all but dead; studios are playing it safe by churning out overly familiar stories, usually accompanied by a number in its title.

This summer however, there's a new hope on the horizon. Its name: Pacific Rim.

It's the near future and Earth is a little embarrassed with itself. After all the years of looking to the stars for an alien invasion, the cheeky alien devils pop up from out of the Earth's crust instead. They've apparently been there for quite some time, even before the dinosaurs, but have chosen this moment in our history to take to the surface and cause some havoc.

Although catching mankind with his pants down somewhat, the finest scientists the planet have to offer, quickly come up with an idea to protect what's left of the planet, by building robots the size of buildings.

These bots aren't exactly easy to operate however; they need at least a couple of operators inside  who must literally be on the same wavelength, by enduring a process called drifting  to be able to sync with these mechanical behemoths.

Leading the fight is Stacker Pentecost (Idris Elba), who has a number of pilots under his command, including Raleigh Becket (Charlie Hunnam). Raleigh in particular, has returned from personal tragedy, to take on these alien creatures, by taking charge of Gipsy Danger, who may well be the grand-daddy of the robot fleet, but still has some fight in him yet.

With the survival of mankind at stake, let battle commence! 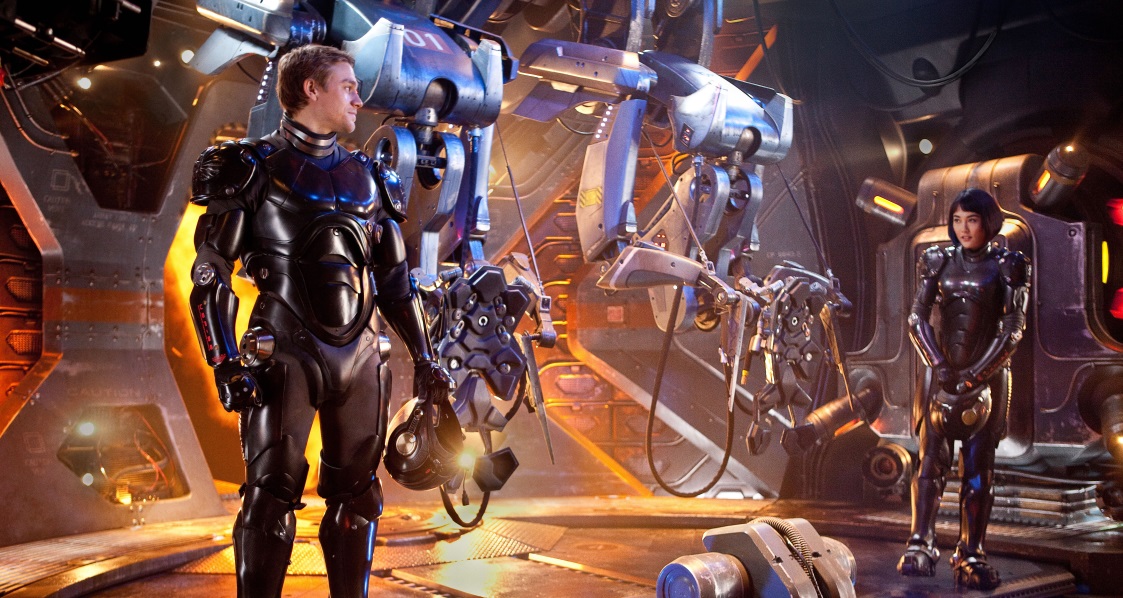 Gee this is awkward, who would have thought we'd end up wearing exactly the same outfit to work. Spooky huh?!

Mexican director Guillermo del Toro has proven in the past, with such titles as Pan's Labyrinth and his Hellboy films, that he has a true flair for the visual. And Pacific Rim certainly fits in with his creative modus operandi; it's big, bold, and surprisingly beautiful in places. It also operates on a scale that audiences in search of summer thrills can appreciate: extra large.

Where other directors are attempting to come at stories that audiences are more than familiar with in a supposedly 'fresh' way, del Toro goes back to basics by offering a key demographic a simple proposition  big robots fighting monsters. It's certainly not wholly original, as it's merely a twist on a Transformers versus Godzilla theme, but boy does it impress. It's the kind of fighting that kids used to replay with their toys on their bedroom floors, as the shiny plastic of robot toys would crash against beasts of hard rubber. The difference being now is that del Toro's play set is just that little bit more expensive.

The acting and script won't win any awards (not of the positive kind, anyway), but that doesn't really matter. The film's main objective is to entertain, and it does so with flying neon colours. It also manages it without any big names, nor any big superheroes for that matter.

Pacific Rim is slightly old fashioned in that it's clearly a throwback to an age when thrills could be had from a blockbuster. It's the kind of spectacle that's been missing from our summers for a number of years now, so enjoy this incredibly fun piece of blockbusting while it lasts.