The year was 1980 when a certain yellow circular character with an insatiable appetite for pills first appeared in arcades. Two years later he was invited into our homes, as he was now playable on the Atari 2600 console.

From humble beginnings of waca waca-ering around a maze, to becoming a global cultural phenomenon, making the video game character truly iconic.

It’s incredible to think considering the limited nature of the original game, as well as the lack of detail of the character, that no one could have foretold the franchise would have legs, unlike Pac-Man himself at the time. 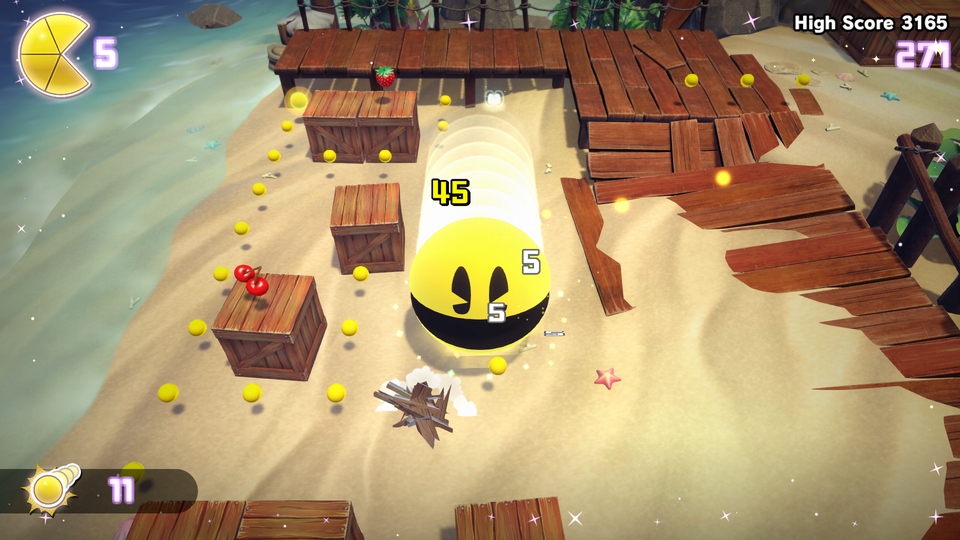 Hey did someone say there was a barbecue?

Since then he has appeared in over 60 games, as well as made guest appearances in other gaming titles, such as Super Smash Bros., Everybody’s Golf 6, Street Fighter X Tekken and Mario Kart 8. On top of that, he’s also been in a myriad of TV shows and films, including The Simpsons, Futurama, Pixels, Guardian’s of the Galaxy Vol.2 and both Wreck-It Ralph films.

In 1999, a game was released to celebrate his 20th anniversary on the original PlayStation, Pac-Man World. It saw him in a 3D platformer for the very first time, just like his peer Mario, jumping and bouncing his way through various levels.

With Pac-Man now in his forties, that game has now been re-mastered, making his previous adventure look and sound better than ever. 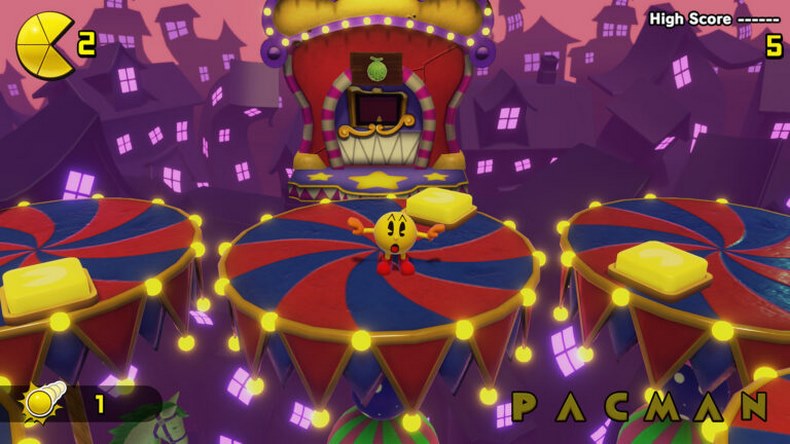 So for my next song, I want to dedicate it to all the little guys in the world.

There’s a party happening celebrating the birthday boy, with all his family and friends there. Overlooking the event are four ghosts: Blinky, Pinky, Inky, and Clyde; they have a mission to capture Pac-Man, but see so many yellow characters in front of them, they decide to take them all, back to Ghost Island.

When Pac-man arrives, all his guests are gone, and all that remains are flyers, stating there’s a party happening on Ghost Island, where you can meet the real Pac-Man. There’s only one thing for our hero to do, and that’s to go to the island and rescue all his pals, and maybe pop a few pills in the process.

So having spent twenty years in 2D, this was an interesting concept to bring Pac-Man to life in a 3D environ, albeit a limited one. However, probably not as curious as seeing him with legs and arms, adorned with red boots and orange gloves. It had to be done however, in an attempt to bring out not only more personality, but also a body, that is quite useful to have in a platformer.

And what a tricky little platformer it is too.

It has to be remembered that when originally released, it was simpler times in terms of video games. This title definitely feels like it at high ambitions, with a number of elements involved.

The main game consists of six stages, which feature different worlds, such as pirates, the circus, space, and a graveyard. Each stage has a number of levels, ending with a boss fight.

And as Pac-Man now has feet and arms – surprise! – it enables him to have a few special moves, such as throwing pills you’ve collected at enemies, speed running like Sonic for a brief period, and a jump and butt bounce combo. Most enemies can be defeated using one of these methods, except for ghosts, who of course, can only be defeated by swallowing them after you’ve eaten a large yellow pill yourself.

Even though he has these new abilities, it doesn’t feel as if they were thought out that well; for instance, the standard practice for a jump followed by a hover is to hold the jump button, but not here, instead you have to press another button after you’ve jumped, which is annoyingly fiddly.

The world’s themselves are surprisingly fun to explore, and you will need to, thoroughly, if you want to complete the level. They are also quite pretty too, especially with this update, such as the colourful circus world.

The design of the levels are a little off in places however; because it’s a limited 3D world, where Pac-Man can move back and forth into the screen as well as from left to right, there are areas where the camera can be on the stubborn side, making what would normally be a safe bet jump, one to your doom. The camera is fixed too, so there’s nothing you can do about it, except die, fairly frequently.

It would have been nice for some more detailed tutorials too; at the start there are notices all over the place, telling you what to do, but very succinctly. We were confronted in one early stage, by an issue of where to go next, as it wasn’t clear. We took care of all the enemies, and collected what needed to be collected, and yet we were still stumped. We had to go online to find where the hell to go next, which is never ideal. It transpires that one of the barriers you can’t get past, you can, if you speed run at it and use it as a ramp. This wasn’t mentioned in the tutorial, and it wasn’t sign posted at all that you could do that, which seems an oversight for this updated version.

Another oversight seems to be what happens when you die – not in real life silly, in the game. Having not yet found our feet, as it were, early on in the game, we were keen to destroy whatever needed to be destroyed. There are crates littered throughout the game, and they have items inside if you break them. We broke one said crate and continued the level. We then died soon after. When you come back, all the items you have destroyed, stay destroyed, which is unfortunate as apparently we needed that particular crate to access a section of the level. The only way of getting it back was to quit the level entirely and come back to it from the start, which wasn't ideal. Similarly, on a more positive note, at least the enemies you have killed stay dead too, which makes it easier to get around the level. So you know, swings, roundabouts.

Also within these levels are keys you can pick up, that open up a themed Pac-Man maze for you to play. It’s from a 3D top down perspective, with a few elements from the level you’re playing included.

One of the other things you can attempt within each level is to collect six letters that spell PACMAN that are available throughout it. They’re not essential for finishing the level, but if you do, you are rewarded with a bonus section.

There are two stand out boss levels; one that resembles Galaxians, and another that is a racing game. It’s a shame that more of this inventive use from other franchises wasn’t implemented, as it could have taken the game to a whole other level.

The levels are quite short, and with only six worlds, so is the game. It can be finished over a course of a few hours, but to complete it, collecting everything that needs to be collected, will be more of a challenge.

We have to confess that this 3D outing passed us by on its initial release, but it makes for a fascinating play through with this updated version.

It’s impressive to see how they managed to take a limited character and game play, and breathe new life into the franchise, giving Pac-Man more to chew on.

And for a game that’s over 20 years old, it delivers a satisfying gaming experience, which can only whet your appetite for more what with further World sequels wating in the wings to be re pac'ked, so bring on those pills.