Washing-up liquid bottle, breakfast cereal cardboard box, soap powder packet, sponge, drinking straws. It may sound like a really dully shopping list, but they were the key items often associated with craft building for youngsters. In fact these are genuinely some of the items needed for the now infamous Blue Peter Tracy Island project in 1992, which led to the BBC receiving over 100,000 requests for the fact sheet, which the Beeb just couldn’t cope with.

It’s just one example of how British children were encouraged to get crafty, by using tat to build, well, more tat.

One of the purest forms of crafting is origami. The art of paper folding has been a part of Japanese culture since the 6th century, and you can certainly appreciate its simplicity in terms of materials needed, if not fiendish execution, as there was no need for smelly crisp tubes or sticky-back plastic, just paper.

The art form has been adopted by one Japan’s most successful companies, Nintendo, for one of its latest Switch titles, as it flattens its plumber mascot once again for the latest instalment in the Paper Mario franchise. 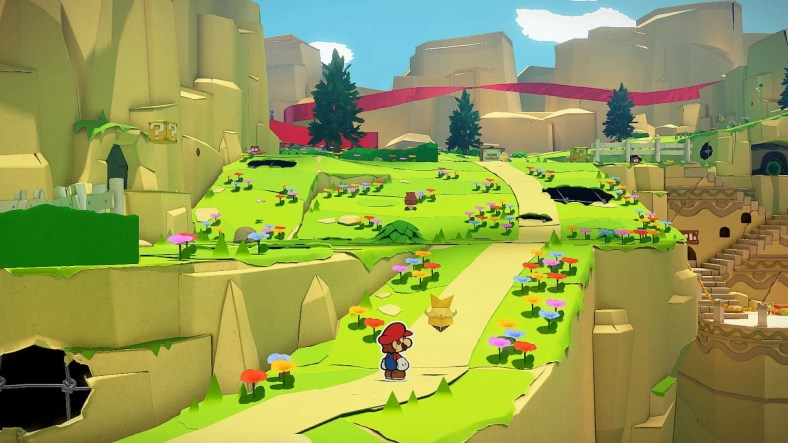 Now I wish I hadn't let Yoshi go do his own stuff now, my feet are killing me already!

When Mario and Luigi get an invite from Princess Peach to attend an origami festival, the brothers are excited to go. When they get there however, the whole town appears to be abandoned. They also discover that Peach has been flattened and folded to within an inch of her life into origami by King Olly.

Olly then uses the power of coloured streamers to send the castle off into the distance, with each colour sprawling across the land. Mario gets separated from everyone, but soon crosses the path of Olivia, Olly’s sister, who doesn’t approve of her brother’s actions, and offers to help Mario out in any way she can.

With the world now littered with familiar enemies, albeit their origami versions, paper Mario decides that he must take on his paper foes, in order to restore the world back to its harmonious ways. 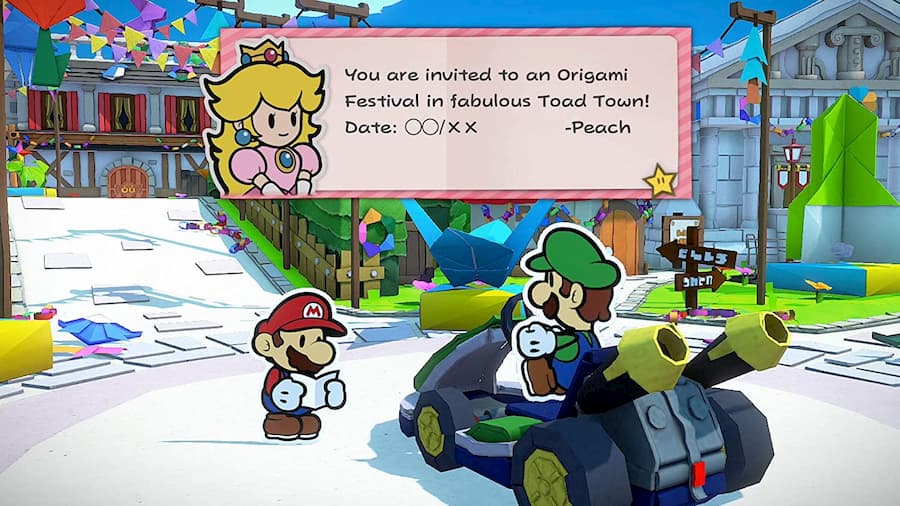 But bro, you promised me a weekend go-karting down the Rainbow Road?!

This title marks the sixth entry in the Paper Mario series, with its RPG-lite elements. And although it certainly plays different from his now D adventures, this entry still maintains a high level of creativity throughout.

One of the most striking elements is its visuals. The world you play within is a visual marvel, brightly crafted in loving detail, from the characters throughout, to the trees and surrounding vistas. Perhaps one slight disappointment is that Mario is represented in a simple 2D form, which although is still pleasing, it would have been interesting to play around with his look throughout the game.

And there is something to be said for controlling a 2D Mario in a stunning 3D world, which is curiously both familiar and fresh simultaneously.

In many ways the game plays like a regular Mario, 3D platform title, moving around, jumping on objects, talking to characters, and of course, jumping down pipes. The main difference however, is in the combat.

If you cross paths with an enemy on your journey, it doesn’t take place there and then. Instead, Mario enters an arena where he takes on his foes in a semi-RPG circular arena. Initially you have two weapons at your disposal, a hammer and your boots. If you choose the boots, you can attack up to four enemies in a row, from front to back. If you choose the hammer, you can whack four enemies in a block of four.

This is where things start to get interesting. And, it has to be said, a little confusing. If the enemy in front of you isn’t in a particular good place for your weaponry, you have the ability to move them, either by moving the rings left or right that form the circle, or by moving them in a row, forward and back. It’s an interesting technique, to begin with at least, that certainly offers something different by way of combat. The further you get into the game however, the more convoluted the whole process begins, as you frantically try combinations that will work in your favour.

The problem is, you not only have limited moves to get it right, you also have limited time. These two elements ramp up the pressure big time, and can make a seasoned Mario player melt before your very eyes.

At one point, during an early boss battle, that lasted far longer than it should – and we’re talking over fifteen minutes here – we could almost see us, getting an A4 piece of white paper, with no folds whatsoever, and waving it in the air to concede defeat. Boss battles are far more complicated than regular battles, with you having to plan a journey around the circular battle field, in attempt to reach battle prompts in your favour. Playing out like a puzzle within puzzle, it felt almost as if we were cracking the enigma code, or we were going to be transported to within the paper sculpted world like a Nintendo version of Tron. Sadly neither of those things happened, only the stirring of a migraine.

The battles are something that you just have to get used to, as they are an integral element of the game that can’t be ignored. How much fun they are to participate in will depend upon how much of a sadist you are.

That said, the fighting aspect of the game isn’t nearly enough to put you off from playing the game entirely. How could it when the world they’ve created is so beautifully realised. So in all other aspects it’s both classic Mario and Nintendo, particularly in terms of game-play and exploration.

You will find yourself constantly running around the world, hammering left, right and centre, in the hope of discovering lost or trapped flattened characters, and setting them free.

All in all it’s as you would expect from the great Mario, in any form, a huge charm offensive. It’s a game that not only encourages exploration but rewards it, as you find yourself travelling around the various zones, looking for secret areas and hidden treasures.

There will be a definite Marmite vibe surrounding the battle system however. It certainly doesn’t help its cause that when it comes to upgrading your weapons, they only have a certain life span and don’t last forever. There was a time when you could rely on the workmanship found in a weapon in gaming, but for whatever reason – probably Brexit and Trump – everything is just so much more disposable. Listen up Nintendo, when we buy a pair of heavy duty boots, we want them to last.

Paper Mario: the Origami King is yet another example of the high level of creativity from the team behind the world’s most famous plumber. Yes the battle mechanics won’t be for everyone, but it has to be remembered this isn’t a part of Mario’s platforming antics, this is supposed to be different.

It is an elegant adventure, that is both cute and crafty, that is certainly evolving the Paper Mario franchise into a fine art indeed.