Paws of Fury: the Legend of Hank

It’s surprising how often animators turn to not only featuring animals that talk, but also ones with a penchant for the martial arts.

There’s a panda that does kung-fu, teenage turtles who are into all things ninja, as well as a skunk training alongside a whole menagerie of animals in martial arts.

A new addition to this list is Hank, a lone dog in a cat’s world whose given the responsibility of saving them all. 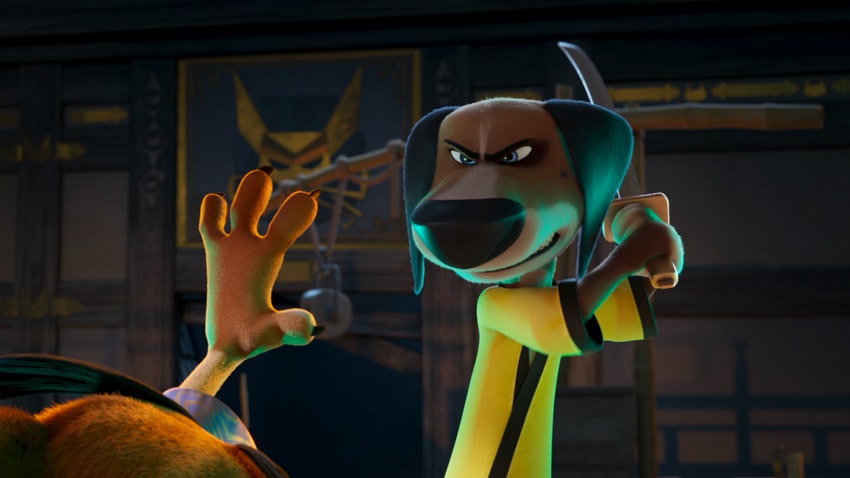 I got this from Uma, and you're telling me my bum looks big in it?!!!

Living in the small, quaint town of Kakamucho is a community of peaceful cats. And although they are harmless, the town itself is a thorn in the side of Ika Chu (Ricky Gervais), who finds their town a blot on his majestic landscape, so decides he need to get rid of it. He needs to do so however, in such a way that it won’t draw attention to himself, or alarm his Shogun (Mel Brooks).

He comes up with a cunning plan then, to elect a new samurai to the town, one that will fail on every count. Who better for the job then than Hank (Michael Cera) – a dog. Little does he realise however is the grit and determination this plucky canine has, and his heart for keeping this cat community safe.

Although his heart is in the right place, Hank doesn’t exactly have the skills, so he manages to get Jimbo (Samuel L. Jackson) to be his master, to teach him all the ways of the samurai. But is there enough time? 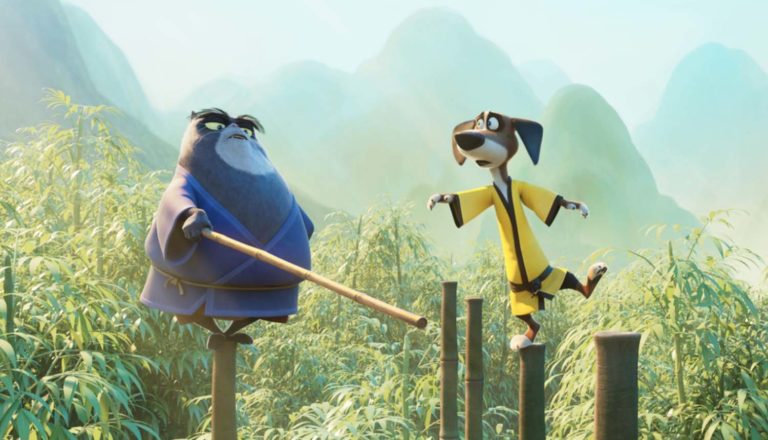 Now touch your nose and rub your belly...

It’s unusual for an animated feature not to come out of one of the already established studios like Disney and DreamWorks, and it’s even more of a surprise when it equals them in quality.

Even more impressive when it’s had to navigate various obstacles, such as remote working due to Covid, with the film originally down to be released in 2017.

For a film set within an almost multiverse oriental setting, where cats are the predominant species, it has the perfect yin yang, with the balance of a sharply witty script with some real laugh out loud visual gags.

Not only are there a number of knowing nods to it being a film, but it even breaks the forth wall with a cool and amusing scene.

There’s certainly a quality to the writing, which shouldn’t be a surprise with Mel Brooks involved; what is a surprise is how comedian Richard Pryor gets a writing credit, as he’s been dead for over 15 years. There’s talent, and then there’s talent we guess. Perhaps it has something to do with being loosely based Brooks’ 1974 classic Blazing Saddles, which Pryor starred in; after all, it may not feature baked beans but there is a fair amount of farting.

The casting is great too, with Michael Cera in top form with his Woody Allen-esque neuroticism, without all the dubious family shenanigans. Cera has seemingly slowed down in starring in projects, so we should be grateful for him lending his voice to this one. There’s also a genuine relationship that grows between his Hank and Jackson’s character Jimbo – no doubt taken from Kurosawa’s Yojimbo - that is playful and charming.

Add to that the comic greatness of Brooks, and well, Gervais, as the film slices and dices with some excellent one-liners.

And although the animation itself isn’t in the same realm of Pixar, it still manages to evoke a great sense of rich characters and time period.

It’s the perfect storm within the world of martial arts of when Hong Kong Phooey meets The Seven Samurai, making it the perfect family chuckle-fest that is a cut, thrust and thwack above the rest.