Always the bridesmaid, never the bride. That's the situation Konami has found itself in over the last several years to the bridezilla that is EA's FIFA.

The fact of the matter is, PES is unlikely to ever find itself in the position where it will be more popular than FIFA. EA pump the kind of money into the marketing of its annual footie title that it would make the Greek finance minister weep into his soggy kebab. Konami's budget is nothing more than pocket money by comparison.

But despite the fact that they are two football games, they certainly play distinctively differently. Continuing on from the previous good work of its last incarnation, PES 13 has an oh-so-sweet fluidity about it. The ball can be passed with such a pace, that it can ping around the field like a pinball. It can be manic, on the edge of your seat stuff, but there's no denying there's more of a thrill playing it. The passing in FIFA in recent years had slowed right down to a veritable trot, with the players running speed almost down to a laborious trudge. Realism has its place, but if you want the most authentic game of footie, why not just go outside and play it?

After having our fingers brainwashed into the FIFA button configuration over the years, the PES layout can take a bit of getting used to. And just on normal setting, the game played with a higher degree of difficulty than expected; goalies especially have evolved from being scarecrows with gloves on, to becoming athletic demons who will stop at nothing to prevent a ball going in the back of their net.

Persevere however, and the strangest feeling just may come over you: enjoyment. FIFA has become more and more frustrating to play (and that's not even taking on board the hordes of plebs who insist on playing as Barcelona online every time), with the pressure on developers to make it look different in some way from the previous year's version; every little tweak they do in an attempt to make the game better, just has the opposite effect. The penalty mechanic being one prime example.

PES 13 doesn't have any airs and graces; Konami appear to take on board feedback regarding each title, and actually attempt to fix any major gripes. 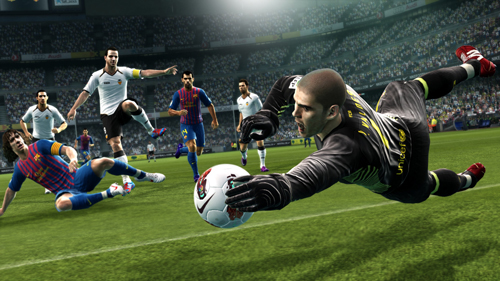 These new magnet gloves work well with the metal shavings I put in the ball. Suckers!

PES 13 desperately grasps onto the licence for the UEFA Champions League, because as everyone knows, FIFA owns the licence to pretty much everything else, including the names of the teams themselves. PES has secured one solitary team from the Premier League, so if you're not a Man United fan, you won't be too happy. You will be if you're a North London fan though, as Robin Van Persie still plays for your team, as well as the other players  names and likenesses from the Gunners.

But for the dedicated fan, it's just not enough. There's no Premier League season option, with all the various cup games that come with it, and also no kind of manager mode, where you can buy and sell players, as well as make all the other kind of decisions a manager makes in regards to their club.

And perhaps the biggest affront of all is that the game has the smarmy Christian Ronaldo on its cover.

The game does seem to have made some progress with the audio side, as the music included in the game is more than bearable; as is the commentary from Jon Champion and Jim Beglin. Unfortunately it still appears to adopt an ugly and clunky interface, which would look more at home in the eighties.

It's a shame that the David that is PES 13 can't compete on a level playing field with the Goliath that isFIFA, because there's a distinct possibility that Konami's game is actually more fun to play.

But without the licences for the big clubs, players, leagues and competitions, Pro Evo will always remain the underused substitute who will never catch the eye of the masses.

That said, we should be glad that that it offers a real alternative to FIFA, because competition obviously brings out the best in both of them.

It may not be as flashy, or as deep as FIFA, but if you want a fast and furious game of footie, PES 13 is the one to beat.