There used to be a time when we could use the changing of the seasons to calculate the passing of time, but global warming ballsed that right up big time. Now, it's just as easy to do it by game releases. Sadly, the arrival of PES means that it won't be long until FIFA arrives. But is this annual PES update worth the wait on its own merits?

That kind of depends. The obvious difference between the two camps is moolah. Electronic Art's FIFA flaunts its stadium filled with cash for all the world to see, as it owns every other license under the sun. This means that you will not find the Premier league, or any other decent league around the world for that matter, in a PES game. Ever. This results in you playing as a made up named character in a pretend team in a made up league. If you can look past this omission, fair enough. But even though it may look fairly superficial, gamers really do want to play as their favourite team and players.

But if you were Konami, you would look at other ways of looking attractive. With their current interface though, they fail miserably. FIFA is like is like the most glorious operating system, that's just a breeze to use. By comparison, PES 14 looks like the kind of BASIC you used to type into the computers in Dixons on your way home from school. Naff. Everything about it is clunky and blocky. Just looking at it can scratch your eyes. 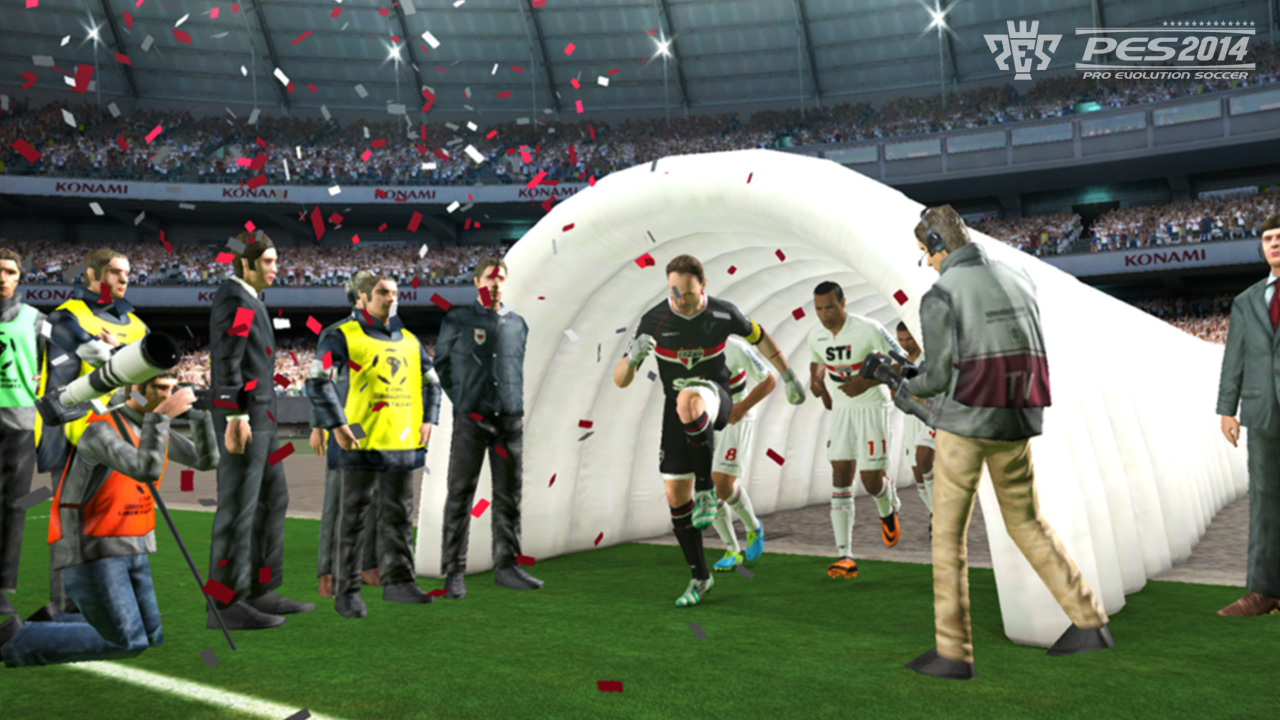 With FIFA owning the license of weather, Konami resorts to paper rain.

Getting involved in the Master League is a slightly unnerving experience. Getting to grips with it is no easy matter; it lacks any kind of fluidity, and even its wording is unfriendly. There is some kind of transfer window available, but as the players you can buy are, for the most part, fictional, there's no real sense of achievement of signing a nobody to your team, which doesn't help either.

Even getting to know the control system is like learning another language. If it wasn't for the handy tips that flash up during loading periods, it would really be a chore to completely understand. And because the action buttons are different to those used in FIFA, it's a real struggle to pick up and play. It's akin to pleasuring yourself with your other hand; you like to think you know what you're doing, but you know in your head it just doesn't feel right.

EA own so much of the FIFA license that PES aren't even allowed to let it rain in their game. It's a surprise then that they get to enjoy kicking around ball around a rectangular pitch; who knows, that might not last for long either.

And yet you have to admire Konami's tenacity. With EA having such a stranglehold with FIFA, there seems little point in offering any kind of competition, and yet Konami do, for better or worse. OK, mostly worse. But that's not to say they won't get it right one day.

Even if you take the whole licensing problem to one side, PES doesn't do itself any favour by looking so pug ugly. If you're willing to overlook not only its ugliness, and many of its other quirks (the fictional names that constantly float above the players heads annoyingly, for instance), it offers a decent representation of the physical aspects of the beautiful game. But with the instant pick up and play appeal of FIFA, PES once again feels too far off the pace to ever be considered a serious contender for football's champion game.