Considering what a commodity they have become in recent years, it’s surprising that truffles don’t feature more in film. Sure, the idea of a truffle heist probably isn’t as exciting as stealing gold or cash, but if you get Vin Diesel behind the wheel with a top crew behind him, you can smell those box office figures.

Of course if anyone was going to make a film featuring truffles, it was bound to be Nicolas Cage. Cage, in a sense, is the human equivalent of the truffle pig, sniffing out the truly weird and bizarre roles, the likes of which only he can play. 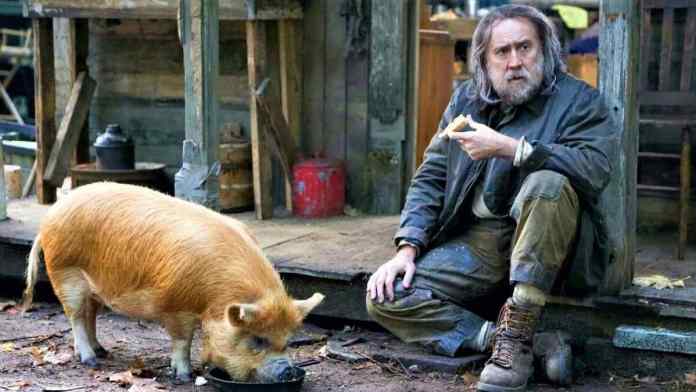 I swear I'll sit all day like this 'til this little runt gets his line right.

Living in a cabin in the middle of the woods is Robin (Cage). He lives a very basic life, with only a pig for company. Although he’s highly fond of the pig, she’s not exactly a pet, as she works for her keep as a truffle pig. The truffles she discovers Robin then sells to Amir (Alex Wolff), a young and ambitious ingredients supplier to high-end restaurants.

Their arrangement suffers however when, in the middle of the night, someone breaks into Robin’s cabin, steals his prized possession, and beats him up in the process. Considering that the pig is all that he has, he is determined to get it back, so he finally ventures out of the woods and heads back to his past life in Portland, to track down what is rightfully his. 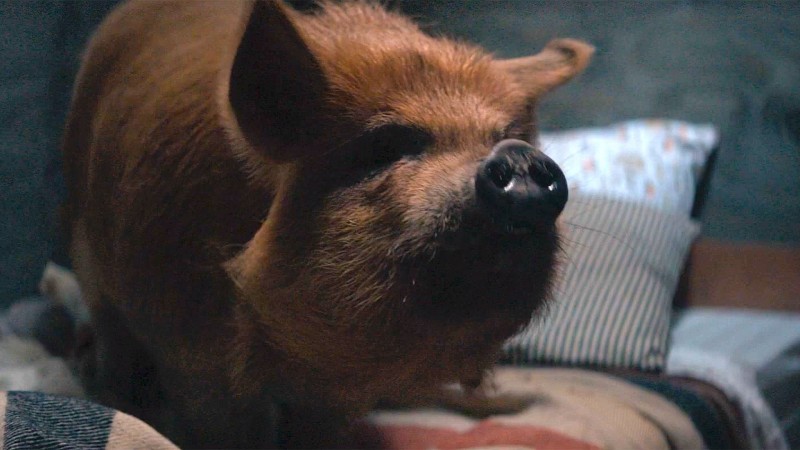 I thought I made it clear I wanted the same trailer as that Cage fella!

There’s a worrying feeling not long into Michael Sarnoski’s directorial debut that his feature has a Taken vibe about it, that sees Cage track down and murder anyone who has anything to do with the abduction of his pig. Thankfully this soon subsides, revealing something far more tender and emotional.

The first card Sarnoski plays is to reveal that Cage’s character Robin was actually a big deal in the culinary world back in the day. This certainly explains his journey, particularly that of tracking down his precious pig in the city.

But the film doesn’t get hung up on this relationship, instead it focuses on the growing one between Robin and Amir, the elder statesman and the young whipper snapper, as the pair learn more about each other on their travels.

Of course Cage gets knocked about a bit, somewhat bizarrely, but he no doubt has that in a clause in his contract, just to add more depth to his character. However it’s a little odd that he never actually has the opportunity to wipe his face with a cloth at any point after, as he continues to carry the physical and bloody markings from his beating throughout the film, which is curiously odd. But then it is a Nic Cage film.

And being a Nic Cage film, he doesn’t give that much away as far as his character is concerned, but just enough to offer a flavour of his previous life. And although the premise is somewhat on the unusual side – so perfect Cage territory – it is one of the most nuanced and subtle performances from Cage in some time.

So much so that Pig is not only yet another fascinating Nic Cage flick, but it’s also strangely moving and heartfelt, as an examination of both masculinity and loss, proving to be a hugely compelling debut for Sarnoski, making himself a commodity worth keeping an eye on in the future.