Anything involving aliens in space usually evokes a sense of fear and dread, as well as the occasional digestive issues leading to a serious bit of stomach ache.

This of course is often the case in video games too, with gamers all too often required to ward off alien attacks, in a bid to save one universe or another.

In 2001 however, Nintendo decided to take a different approach with a new IP, which found a troubled astronaut seeking the help of the local alien life forms, in the game Pikmin.

Fast forward to present day and Nintendo have re-released the third instalment of the franchise for their ever-popular Switch, with the landing of Pikmin 3 Deluxe. 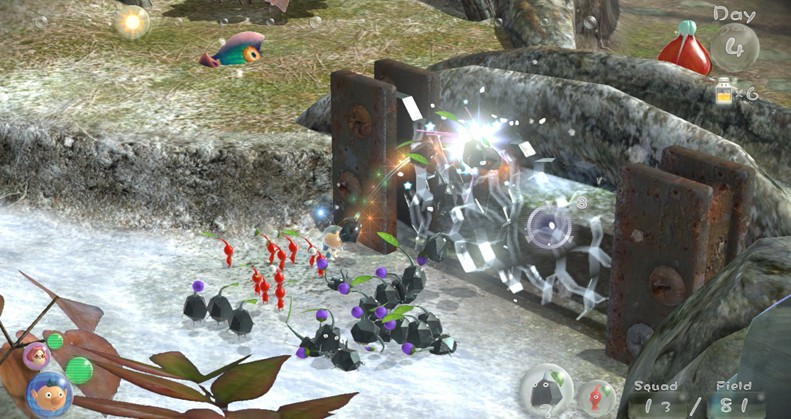 Hey Trump, you call that a wall?!

Cruising rather nicely through the galaxy aboard the SS Drake are its three crew members Alph, Brittany and Charlie. Suddenly they lose control and find themselves plummeting into the atmosphere of a nearby planet.

Thankfully all three survive, although the crash has separated them from one another, as they find themselves in a very unfamiliar world, that of PNF-404. Luckily for them, they soon come across a friendly alien life form, Pikmin, who may well be the key to them not only surviving this new world, but also leaving it. 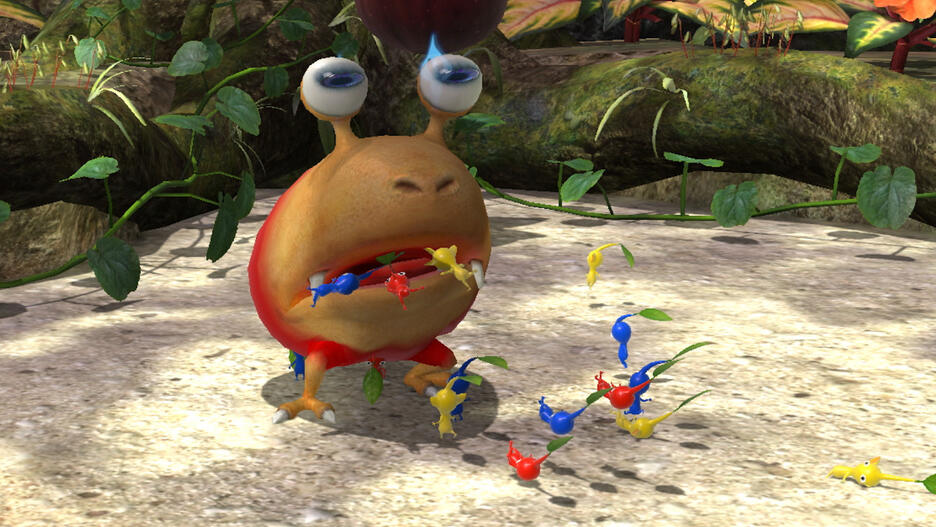 I know everyone raves about this Pikmin diet, but I still feel peckish...

Considering this game was initially released for the Wii U in 2013, it would be understandable that there might be resentment from fans of the series that the Switch hasn’t had a proper new entry of its own. Still, this deluxe version has enough going on to make itself quite at home on its versatile console.

In essence, Pikmin 3 Deluxe is the cutest survival horror ever. In single player mode, you play as one character at a time, and have to explore your new environment, in search of your other colleagues, food to sustain you whilst your on the planet, and clues on how to get off of it.

Luckily you don’t have to do it alone; in truth, you rather take advantage of the various Pikmin you come across, who literally put their lives on the line for you, willing to do as you order. Sometimes, this won’t work out too well for either of you, but especially them, as it can often result in their deaths. Thankfully, for you at least, these friendly critters are quite disposable, as you have the ability to create more. And as cute as the planet and its surroundings are, you will need more, as there are other creatures that inhabit the planet who are far less friendly.

To add to the jeopardy, there’s a day to night cycle that exists; during the day it’s fairly safe to go out and roam around exploring, but both you and all the Pikmin you have in the field have to be back in your space ship by the end of the day, to avoid death related incidences. Add to that your use of the food you find, and your need to keep on top of it to stave off starvation, and you have a fair amount of peril to manage.

Luckily, there are a large variety of Pikmin at your disposal, who are on hand to get you through any puzzling section, as each group has their own distinctive abilities. Some are good with water for instance, others fire, while others are good at breaking down obstacles, etc.

With this deluxe version however, for the first time you can play through the game in co-op mode, so it could be said that the peril is therefore shared. It’s a mode that could have somehow been shoehorned in, but the game actually benefits from another pair of hands. It means that the screen can split, with both players going off independently and do their own thing.

There will be times however, when you will need to help each other out; this is often the case when you are physically separated, with a broken bridge between you that needs fixing. One then might need to throw a specific type of Pikmin across the gap, in order to help you both out. It’s at these exchanges where real life relationships can be tested, depending on if one player feels it’s a priority or not, and still decides to go off and do their own thing. This will only jeopardise the overall mission however, and it would be pertinent to remind them of that.

Overall though, the newly implemented co-op mode is a great addition, and certainly makes the game more appealing, even if you do happen to own the original game.

And although the game is seven years old, and this Switch version hasn’t had that much of a visual make-over, it’s still an attractive game to play. Also, considering the previous version was created for various control methods, including the Wii remote and Nunchuk, the transition to joy-cons and/or the Pro controller is a reassuringly smooth one.

Overall, the arrival of the SS Drake and its crew to the Switch is a welcome one. Yes the game has a high adorability factor, but that shouldn’t belie its savvy puzzling elements, that are key to your survival.

Let’s just hope this spirit of co-operation with other life forms carries over into real life, when Elon Musk et al are flinging humans into space for real, and that they lay off the trigger finger a bit. Who knows, they could be as adorable and helpful as Pikmin.