It’s difficult not to associate the name Pinocchio with the classic 1940 Disney animation of the same name. The character has of course been around longer than that, created as he was in 1883, where he made his debut in the children’s novel The Adventures of Pinocchio, written by Italian Carlo Collodi. 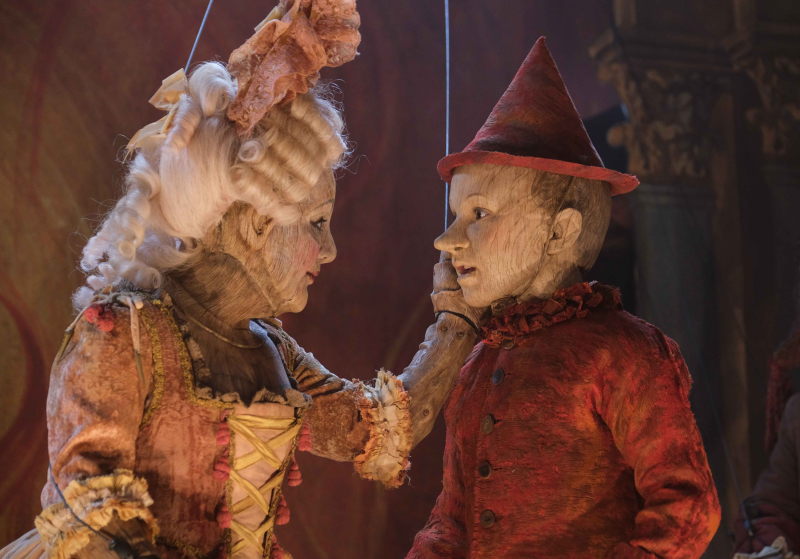 With a complexion like yours I suggest some natural beeswax.

Living in a small village is Gepetto (Roberto Benigni), a carpenter who has fallen on hard times. With the arrival of a puppet theatre, he decides to make a puppet of his own. He visits an old friend to ask if he has any off cuts he could possibly have for free. It just so happens that he had just been spooked by a log moving in his workshop, so he gladly offers it to Gepetto.

Wasting no time, Gepetto goes ahead and starts to craft his creation, a young boy. It’s an impressive piece of work when it’s finished, and he soon finds himself talking to him. He’s taken aback when the puppet starts talking back, calling him ‘papa’, so Gepetto names him Pinocchio (Federico Ielapi) and treats him as a son.

But what Gepetto doesn’t count on is how much like a real boy his Pinocchio is, particularly when it comes to doing as he is told. He is extremely curious about the world around him, and it’s not long before he decides that he wants to be human, and runs away from Gepetto with the hope of returning a real boy. And so begins his incredible adventure, which is more dangerous than he could ever imagine. 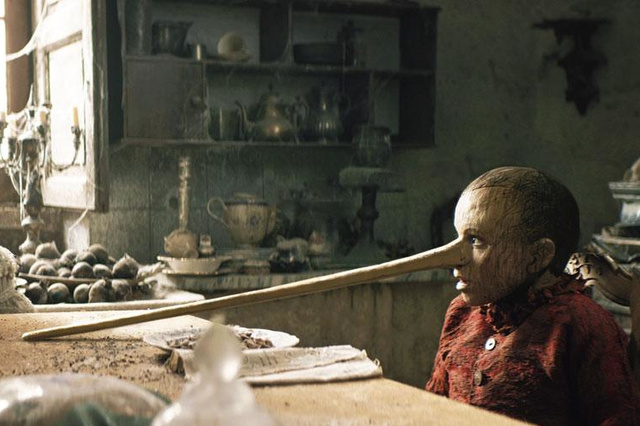 Trust me, nose enhancements are all the rage right now.

Italian director Matteo Garrone’s vision of this classic is definitely in keeping with the original text. It may be a PG, but it’s extremely dark in tone in places, so much so that it may disturb a few adults, never mind a younger audience.

The overall feel of the film is like the marriage of classic Italian neo-realism - echoing young Bruno’s search from De Sica’s classic Bicycle Thieves, with his wide-eyed innocence, but instead of looking for a stolen bike, he’s looking for the opportunity to be turned into a real boy – with Terry Gilliam in fantasy mode. Pinocchio’s playground my well resemble a rural Italy, full of a community doing all they can do to survive in hard times, but it’s littered with curious characters that wouldn’t look out of place at a kinky Venetian mask party. It’s a curious hybrid, but works extremely well.

It’s also great to see Roberto Benigni, albeit in a relatively small role, with a story he clearly loves, having already written and directed his own version in 2002, where he also starred as the titular wooden character, despite being 50 at the time, so at least his Geppetto is a more age appropriate role.

Certainly the visual treatment of Pinocchio is impressive, relying as it does on an authentic feel delivered with prosthetic make-up, as opposed to CGI. There are times however, when he can appear somewhat sinister, looking as he occasionally does like a cross between Freddy Krueger Jnr. and the red-coated figure from Don’t Look Now. That said, Ielapi’s Pinocchio is extremely believable and far from wooden.

It’s a journey full of fantasy and wonder, offering a slightly edgier version than most audiences are used to.

It could certainly do with a bit more humour, black or any other colour for that matter, and at over two hours, is the mother of all puppet shows that does outstay its welcome.

It’s also a little disappointing that it’s dubbed – presumably to make it more appealing to a young English-speaking audience – but credit to Garrone for taking it seriously, as he included not only as many Italian voices to keep it authentic, but also having many of the actors dub themselves, including young Ielapi. And all this out of his own pocket to the tune of €150, 000, before even finding a distributor. That said, there is a subbed version available, which would certainly be easier on the ears.

Although an only child, he won’t be on his own too long as Guillermo del Toro is currently crafting his own version for Netflix, albeit a stop-motion animated musical, which again is more in keeping with the 1883 original in terms of its narrative. And then there’s an upcoming live-action version, directed by Robert Zemeckis with Tom Hanks attached to star in, so we’ll be soon awash with talking puppets.

That said, this live-action version is both bold and beautiful, breathing new life into the boy made of wood, marking Garrone as one talented puppet master. It has an authentic fairytale quality to it, that is magical and mesmerising, making it a highly welcome addition to the ever-expanding Pinocchio family, and that’s no lie.