Having spent a number of years working at BBC Radio 1 in a DJ capacity, Reggie Yates knows a thing or two about radio.

It makes perfect sense then for the all-round broadcaster to have a radio theme to his full-length directorial debut that he’s also written.

So even though we're back in time yeah, this isn't a DeLorean?

They decide they want to go to one of the hottest in the city, Twice as Nice. They don’t have tickets though, but that’s not going to stop them. So they hatch a plan then hit the Custard Cream that is Cappo’s yellow Peugeot, and make it a night that none of them will forget. Which it turns out, is fairly accurate, albeit for all the wrong reasons. 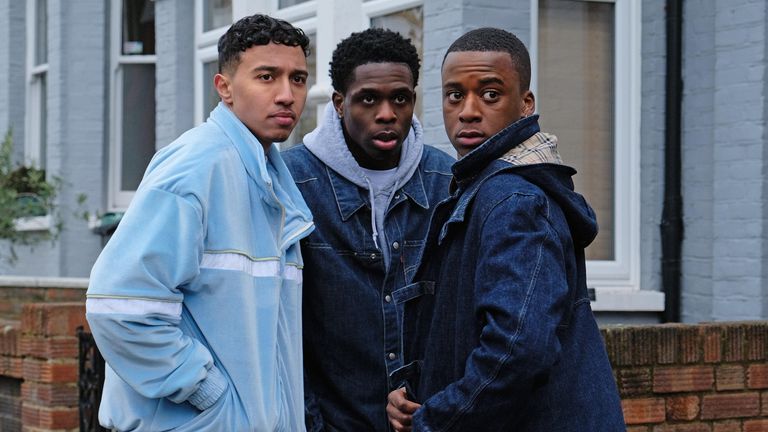 Is that one of the Mitchell brothers over there?! We beter scarper.

The one thing you shouldn’t get hung up on about this film is its title; it’s a reference to the trio’s dalliance with pirate radio, but it’s not the main focus. What it is, is the strong friendship between the three. Yates clearly struck gold in the casting department as his three leads have an impressive chemistry which is the heart of the film. Although the plot is fun, it’s a tad simplistic, and as basic as it gets. It doesn’t really matter though, as the main characters drive the narrative with some quirky banter, with Yates showing some genuine flair for dialogue.

He does well directing too, giving the film an energy that’s just a shot to the system like a cinematic Red Bull. The film has very few lulls, with the characters always moving forward against a clock heading for midnight.

And as you would expect, with his DJ experience, the film has a kicking soundtrack too, with a pleasing nod to the period of the time. Even if you weren’t around in 1999 to discover these ‘choons’, they still shine as the classics they are, even today.

You know you’re having a good time when you’d like to see more of these characters, possibly in a sequel or a TV series, like a retro The Inbetweeners with just a little more street cred. Only just mind. And if that can’t be done, then perhaps a spin-off for Kid alone, as he’s played with such a playful, quirky nature by Elazouar, he certainly needs more screen time of his own.

Perhaps it could have leant a little more into the world of pirate radio, but then that would have been stepping on the toes of the Kurupt FM crew, and no one needs that kind of turf war.

After years of radio and TV, Reggie Yates has made the perfect start to his directing career, with a well-observed, sharply written comedy, that promises so much more to come.

***Fancy winning a copy of this film? Then enter our competition! For your chance to win a copy on Blu-ray, Click here to enter.***