Britain. Home to the fish and the chips, the biggest of Bens, the henge of stones, and redundant red phone boxes. It’s also currently the home to a veritable hotbed of acting talent, much to the chagrin of our thespian American chums.

There is so much talent on these shores that there could well be a case for having just too darn many accomplished actors. Take the career of Olivia Cooke; she is yet another fresh-faced actress who made a name for herself starring in the underrated US drama, the Psycho prequel Bates Motel, opposite yet another disgustingly talented Brit Freddie Highmore.

Since then she nabbed herself a starring role in Spielberg’s Ready Player One, as well as playing Becky Sharp in a lush TV adaptation of Vanity Fair. With big Hollywood roles thin on the ground, she has turned to TV once again, as well as starring in this entertaining, low budget Irish comedy. 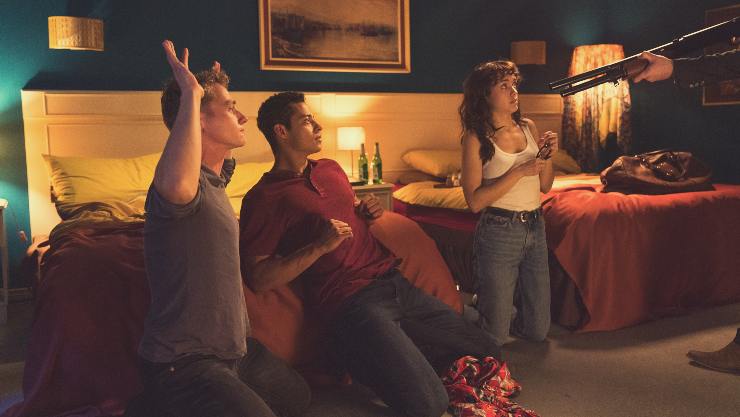 So, none of you tipped me when i served you earlier. Why?

Having lived all her life in her home in Ireland, Pixie (Cooke) is ready to spread her wings and go further afield. She has plans to live in San Francisco, but she knows this will need a serious amount of cash to be achievable.

Luckily for her, she has the brains to work out how to get some, which no doubt has something to do with her father Dermot (Colm Meaney) being a bit of a gangster. So she concocts a plan where two romantic suitors do all the hard work, and she flies off into the sunset with all the cash.

Unfortunately, her plans are dashed somewhat when two doe-eyed, young pups Frank (Ben Hardy) and Harland (Daryl McCormack) are caught in her sexual orbit, then inadvertently cause major chaos that ends in death and bagful of drugs. 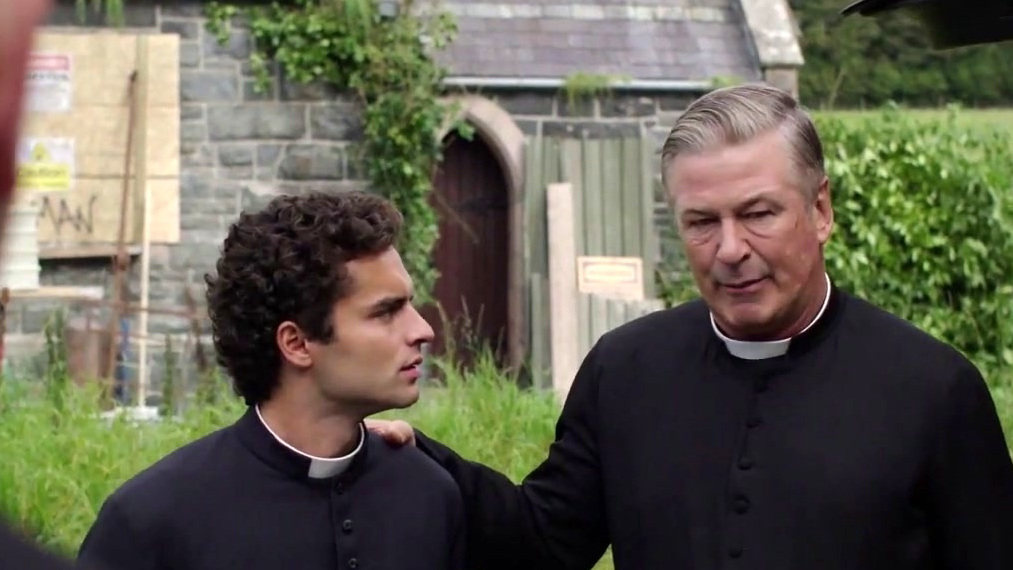 You see son, it's not my hand touching you, it's the hand of God...

Fellow Brit Barnaby Thompson has spent most of his career in film as a producer, but has dabbled in direction. Unfortunately for him, his first two directing projects were 2000’s St. Trinian’s and its 2009 sequel. After such heinous crimes to cinema, it’s no wonder that he hasn’t been allowed to direct anything else since. And to his credit, Pixie almost wipes the slate clean.

It’s a film that is keen to be quirky, full of over the top characters in a scenario that spins wildly out of control. And it works well on all those fronts. Unfortunately for Cooke, the main issue is Pixie herself. The main protagonist, a self-serving, manipulative femme fatale, is just not likeable. She has an agenda and is willing to do anything to achieve it, including cast a spell on the weaker sex to do her bidding for her.

That would be fine if there was a hint of a heart, but there’s something deeply cold and calculating about her that makes it almost impossible to champion her plight. Thankfully the film is saved by Hardy and McCormack who soon develop an adorable double act that belies their young years. Pixie may well be the brains but their characters are the reluctant heroes.

It’s not necessarily Cooke’s fault, who no doubt delivered on point what was asked of her, but it may once again show a further chink in Thompson’s directing armour. It’s obvious that he was aiming for a McDonagh brothers vibe as far as the script was concerned, with an idiosyncratic comic crime caper, and he got fairly close, with some nice dialogue exchanges and a few bonkers scenes, one of which features nuns with guns which will always be a winner, but having your main character be too cool for school makes for disappointment.

Not that Cooke will care, as she has already jumped back on the US TV show bandwagon in two projects, one of which is the Game of Thrones spin-off House of Dragon, which will only boost her profile ever upwards.

There’s no doubting this film has plenty of quirky, Irish charm, but you can’t help but think that it would have been a far better film if Pixie simply wasn’t in it.