Considering it was over 23 years ago since the first Pokémon game was released, for the Nintendo Game Boy, with numerous titles subsequently following, getting more popular with every title, it’s curious that Hollywood hasn’t tried to knock out a film tie-in sooner.

But with the release of Pokémon GO for the mobile market, where all those pocket monsters can be searched for and caught on your smartphone, the franchise has seen a resurgence in popularity, having been downloaded globally over a billion times.

So much so that Hollywood finally decided that they could cash in on the aging phenomenon, focusing on the cutest Pokémon of them all, #25 Pikachu. 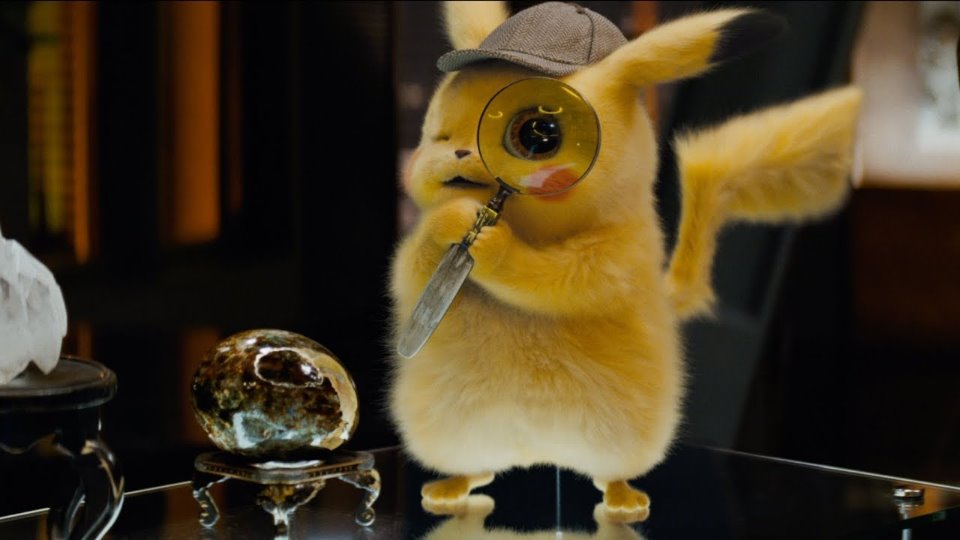 How can I not see Reynolds' ego, even with this?!!!

Having got some tragic news regarding his estranged father, who apparently died in a car accident, young Tim (Justice Smith) has to travel to Ryme City where he lived. It’s a curious metropolis, where people and their Pokémon can live freely together.

It’s there that Tim meets his father’s Pokémon and partner Pikachu (Ryan Reynolds). Unfortunately, as Pikachu is suffering from a bout of amnesia, he has no memory of the accident. He convinces Tim however, that his father is still alive, they just have to work together to discover the truth.

Along with help from trainee news reporter Lucy (Kathryn Newton), they learn that Pikachu’s hunch was correct, and that there’s a bigger conspiracy at play, that threatens the entire city.

So this is the place they've locked Sonic up in.

It could have been so easy to churn out a poor quality tie-in that could satisfy anyone under the age of eight. Director Rob Letterman however, has conjured up a real collector’s item – an enjoyable video game tie-in.

Firstly he dismissed the option to go purely animation, which would have been a far easier route to market. Instead, he plumps for the more sophisticated live action format, with these mythical, colourful monsters occupying the same space as their human acting counterparts. The result is akin to a family-friendly Ted, without all the cussing.

That would probably have been enough to keep the keenest of fans content, but Letterman takes it further by hiring Reynolds to voice the titular character. With his involvement, the film levels up to an impressive spec.

There's no doubt Reynolds steals the show with his quick wit and affable charm, Smith should be given a lot of credit; not only is this his first dalliance with a mega franchise, he does remarkably well on a technical level, interacting as he does so naturally with the CGI Reynolds and other make believe characters.

Although the story is far-fetched, and a little on the long side, it’s possible not to be a fan of the series to get some enjoyment from it, as it pays homage just as much to the likes of Who Framed Roger Rabbit? as it does to the gaming franchise.

And after the poor reception of a recent film trailer for another game to film tie-in, this film’s success can only continue to add to the worries of a certain blue hedgehog, who must be shitting himself gold rings a-plenty.

If you have spent some time attempting to catch them all, this is a vibrant and faithful love letter to all things Pokémon, making it an essential addition to any discerning trainer’s Pokedex.