It all started with just two colours in 1996: Red and Blue, and gamers had one remit – gotta catch ‘em all.

Since then, the Pokémon phenomenon has gone from strength to strength, with the franchise more popular than it’s ever been.

Some could say that the Switch has already had a healthy amount of Pokémon love with Pokémon: Let’s Go and the more recent Pokémon Sword and Shield.

This new release takes a page out of Zelda’s book, by being a remake of a game, for both the Nintendo DS and Game Boy Advance, released in 2005. 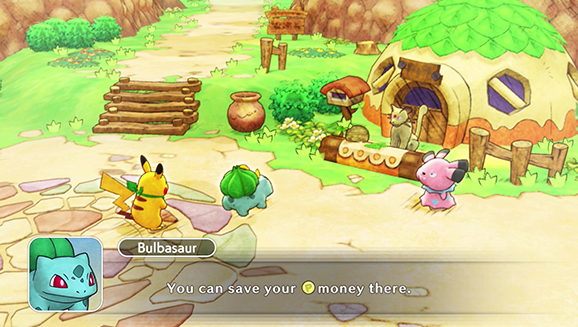 Hey guys that's not fair, we found this cave to self isolate in first!

The game starts with what feels like a bizarre interview, with a series of curious questions being fired at you. Depending on your answers, you’re assigned one of sixteen Pokémon to play through your adventure. Somewhat amusingly, if you’re not happy with the choice given to you, you can just choose the one you want anyway.

Then you choose a Pokémon partner, who will be by your side for the duration, as they become the first member of your rescue team.

The idea then is to thoroughly search dungeons around the world, rescuing poor Pokémon who, for whatever reason, can’t get out on their own. Of course they're hugely grateful for your services, and will reward you in various ways. One of which is to offer to join your team, which is good news for you. However, there is a catch; if you want them to join you, you have to have a relevant rescue camp for them to stay at. There are a large number of these available, all of which can be bought at various prices.

The more dungeons you explore, the more of the game’s narrative you’re given, which essentially revolves around the balance of man and Pokémon kind, which is under some major threat.

Much like The Legend of Zelda: Link’s Awakening, this title keeps much of the original gameplay intact, and then giving it a visual make-over. In terms of its visuals, it has the look of a charming seventies TV animation, with gentle, simple ,water-coloured imagery.

The controls are very basic too, and although that’s fine for just wandering around the base area, it becomes more problematic during many of the dungeon adventures. Using the official Pro controller, moving your characters around can get incredibly sticky. There were times when we were pushing left, and nothing moved, and they only would after a number of hard flicks to get them moving. 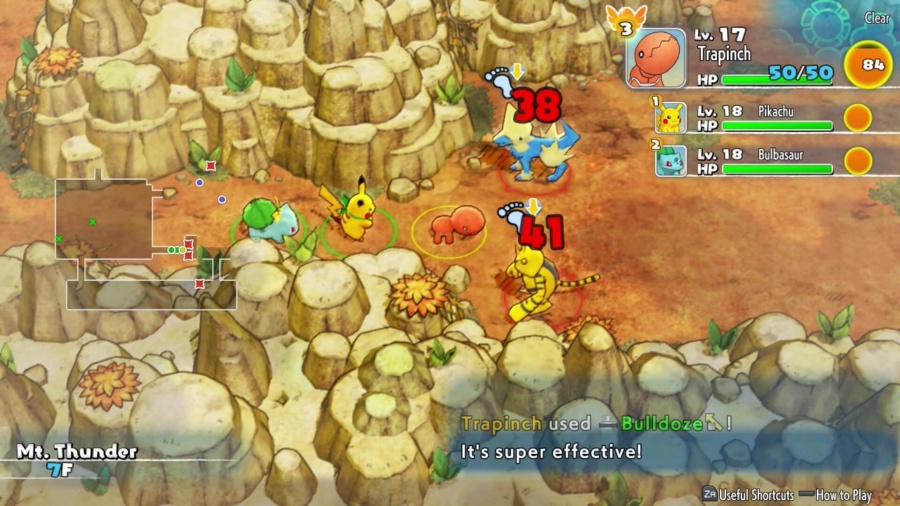 He's got it written into his contract apparently, must always have a mini-fishing game.

This became more frustrating when going down one of the many corridors; with you at the head of your team, you would encounter enemies first. And with your team all behind you, and the enemy in your face, you take all the hits. If you’re lucky, the teammate behind can cause damage a space ahead, but if not, you may well be in trouble, as we often found ourselves to be.

This led to the game’s real issue – death. Having played it for a number of hours, we found the mechanics quite fun, albeit somewhat dated. But unlike other titles, where battles can take their time as you choose which move to make, the battle structure here has a feeling of it happening more on the fly. All your team still attack in turn, but it can be done quite rapidly, without you having to choose the move for them to make. You can change this in the settings, so that you can have more control over their moves, but we found this method improved the gameplay.

And then it happened – we died, in a dungeon. We were expecting one of two things: either we simply resurrected there and then, or we would be sent to the start of the dungeon again. Neither of these things happened. Suddenly you come out of the dungeon and you’re told that if you want to continue from where you are, you have to be rescued. This means you can send in a second team to rescue your first. The problem for us was that at that time, we didn’t have a second team. That’s OK though, as you can then send out a request to gamers on the WWW to rescue you. Sounds great, except for the fact that this can take up to seven days. Not pretend days, a whole actual week. So you either have to patiently wait ‘til that happens, or start the level from scratch.

The first time this happened, it really hurt. Thankfully we were rescued the following day, but we couldn’t play the game until it happened, which is nothing short of being ridiculous.

The second time we thought we were prepared, but clearly that was not the case. We had created a second team, for such an eventuality, but the problem was, as they weren’t on the same fighting level as the first team, they were defeated easier than the first, and therefore needed rescuing...

The key then is to be very scout-like in the dungeons, and be prepared. This means stocking up on essentials, such as revival seeds for downed players, but this also has its shortcomings. Firstly you just can’t do what the majority of idiots around the world are currently doing and bulk buy. Not only can you only carry so much at any given time, but you’re also limited as to how many of the supplies you need you can buy. So if you get into a bit of a pickle, you could easily use up all of your provisions, and die a slow death regardless. Which isn’t terribly helpful.

Another issue on this front, comes by way of food. Your character gets stupidly hungry out on their dungeon crawl, and will need to eat to keep their strength up. If you don’t have it, they die. And if you don’t have a seed to revive them, they don’t come back. It’s at dark times like these that you start to believe that this game hates you. Again, the issue is that you can only take so much food with you, and once it’s gone, it’s gone. If you’re lucky, you may pick some up along the way, but much like finding loo roll in your local supermarket, the chances are slim.

And as if that wasn’t annoying enough, the dungeons change every time you go into them; so if you got your first visit all nicely mapped out, it doesn’t matter as it won’t be the same the next time you enter. And yes, that includes rescue missions.

For die-hard Pokémon players, there’s a lot to recommend here. Despite its cutesy visuals, there are a number of hardcore elements that will test the most hardened dungeon crawler. It also has an adorable story with some fun characters to interact with.

For casual gamers, and possibly youngsters, the experience could well be the thing of nightmares. The learning curve is truly steep, and just as you think you’ve got a handle on things, the game will openly mock your lack of skills and put you in your place, which will normally be six feet under.

Although the game has obviously got a visual make-over, albeit a fairly basic one, the game could have been improved with some major tweaks under the bonnet. A change in difficulty settings for one. There’s a decent game hiding in the depths here, but much like the characters in the game’s many dungeons, it’s a real struggle for it to get out.

And as much as you would like to, you may find it a real challenge to catch ‘em all this time around.