Prince of Persia: The Forgotten Sands

With the Persian Prince making his big screen debut, its no surprise to see a video game tie-in released at the same time. But wait! Although this is indeed a POP game, it isnt tied into the film. It doesnt follow the films plot, nor does it feature the voices of its stars. It is then, a standalone game, that just so happens to be released at the same time as the film. What were the chances of that happening?

Thats not the only surprise in store for fans of the series. This time around, developers Ubisoft have dropped the look and game play attributes of the last game, 2008s reboot Prince of Persia, which featured a pretty watercolour palette and a sidekick for the Prince. Despite looking rather lovely, many fans of the series just didnt get on with it. And due to his companion Elika being there to save the Prince at every turn, meaning that he would never die, made the game way too easy. Certainly all change then for this latest game.

The Forgotten Sands is described as being an interquel which, despite sounding like some form of medication for someone who has trouble sleeping, merely means that its story takes place between The Sands of Time and The Two Thrones.

The Prince is on one of those annoying family visits, where he pops by to see his brother in his kingdom. But just as hes about to knock on the door, he finds the palace is under siege. He fights many of them off to get inside, allowing him to catch up with his bro. As a way to defeat the hordes of enemies, his brother decides to unleash the ancient power of the Sand; it appears to work at first, but then the pair both realise that a darkness is taking over the kingdom. 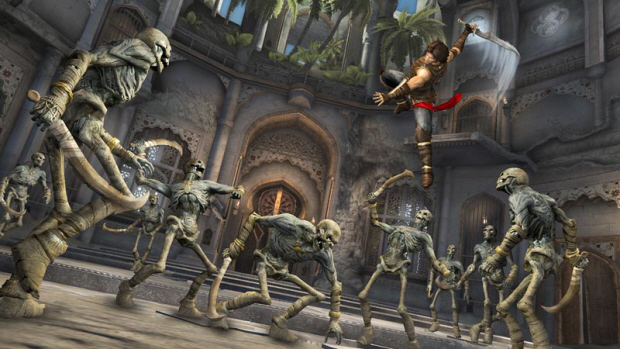 I know the party invite said 'dead exciting', but I wasn't expecting this.

Cue the Princes adventure that involves a lot of fighting, jumping, swinging, hanging, and yes, falling to his death. If youve played any of the Sands of Times games, everything here will be eerily familiar; none more so than overly sweaty palms and the overwhelming sense of disappointment. Yes, the Prince is back to his old tricks again.

During the course of the game, he will come across a nice array of foes; one can never tire of killing sword-wielding skeletons a la Jason and the Argonauts, although you do get close with wave after wave of them. There are some bulkier baddies to set upon too, some with shields meaning you have to knock them down first before finishing them off. You could easily button bash your way through them all, but by stringing a few combos together, there are some nice finishing moves to be seen.

As well as your sword, you also have some upgradable powers with an elements vibe to help you out; you know the sort of thing, a fire trail to burn your enemies, or a touch of wind to knock em down, the usual. The really impressive stuff doesnt really happen until youve fully upgraded each power, but by which point, youre so used to not using them that you tend not to bother.

The most useful tool you have in your arsenal however is the ability to do a Cher and, you know, turn back time. And never fear, you will be using it a lot. In fact, its your only weapon against the games biggest enemy  the camera. It is, without doubt, the games biggest frustration. This isnt new of course. The series is notorious for its dodgy camera angles, but surely this is something they should have not only acknowledged but also rectified by now? Time and again the Prince has to take a literal leap of faith, without having a clue as to where hes going to land. Mostly its to his untimely death as theres nothing there at all. The camera behaves like a petulant child who knows theyve done wrong, but refuses to admit it. It is frustrating as hell and sucks all the fun out of the game.

This is a huge shame because when the Prince is in his element, doing the wall-jumping, pole-swinging, sky-leaping thing, it can feel almost enjoyable. This despite the rather tired sections of spikes from the floors, blades in the walls etc that he has to avoid. None of these sections have moved on since the original games and are just stale and boring to contend with.

The game is also somewhat on the short side for a single player experience, with little in the way of replay value or any multiplayer options. There are unlockable time trials via Ubisofts own Uplay, but thats about it. Uncharted 2 proved that a franchise known for being a single player game can make an effort on the multiplayer side of things. So this game really has no excuse.

Its not all doom and gloom however. Actually, it mostly is, but there are a few new pleasing gimmicks. The most impressive of which is his ability to freeze water. This allows him to turn what was water pouring out of the side of a wall into a frozen pole from which to jump on. This also turns water coming down walls into a solid state which acts as a wall while frozen, which he can now use to run across. 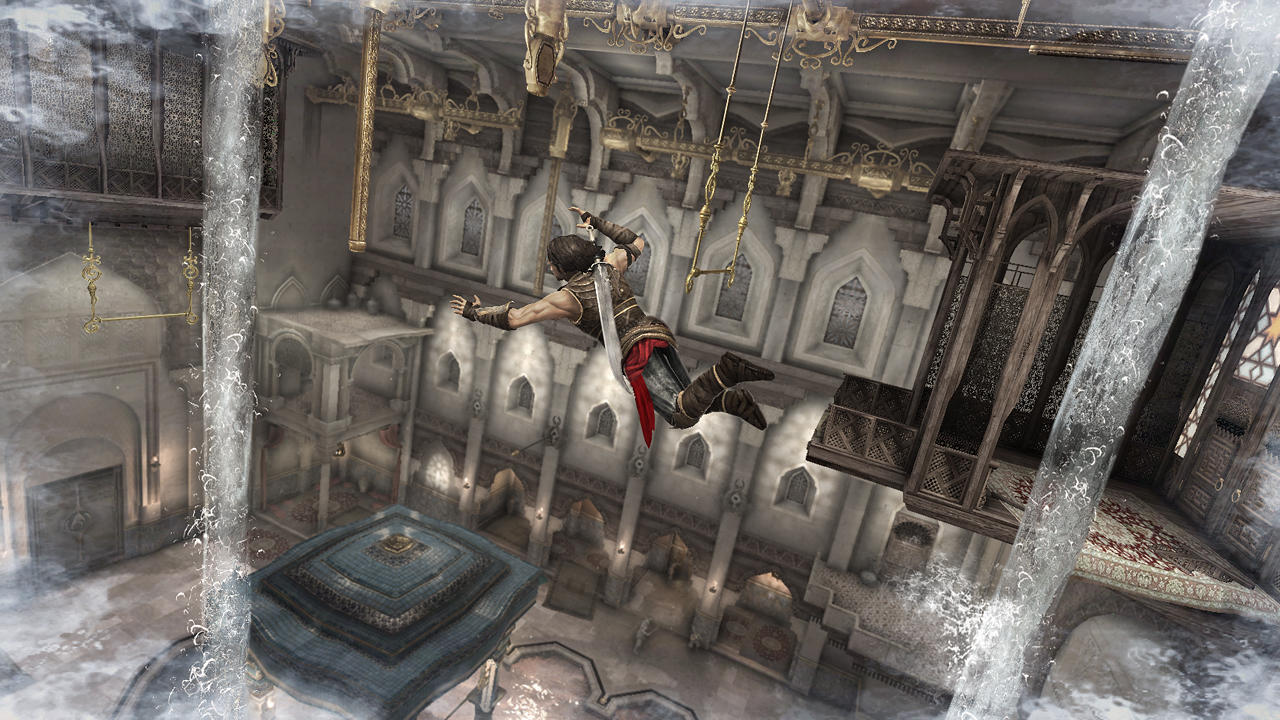 I know they said that the lift wasn't working, but surely there has to be an easier way to get to the seventh floor?

After a while however, it feels like the developers just pushed the whole concept a bit too far, with some really gruelling levels to grind through. The Final Climb level is evil incarnate for instance, when it really shouldnt have been. But with that camera against you, it just saps your soul  and lives  away.

Not only that, but the controls are heavy handed at times too. Due to the mechanic of not only freezing things, you will get to the point where you have to freeze, jump, unfreeze, jump, freeze etc in very quick succession; this all adds up to very weary fingers.

As well as freezing, there are later sections that involve the layout of a level, referred to as memories. You will see many faint outlines of platforms etc which you can make solid with the press of one button. The rub here however, is that you can only have one memory active at a time, which leads to, you guessed it, weary fingers again. Seriously, sometimes less is more.

Although its commendable that Ubisoft didnt simply churn out a tired film tie-in of a game, its disappointing they chose to release a tired rehash of the existing games. The POP franchise has so much potential, and yet on this evidence is far from being fully realised. Considering were now in the 21st century, playing on super-duper next-gen consoles, the Prince has hardly made that big a jump from the original games.

A simple example of this would be that the Prince can stand right next to a vase containing extra life, but although its right in front of him, his blade misses it every time he swings it. For a next-gen game, this is just shoddy.

Unless youre a die-hard fan of the series  making you quite the sadist  the Forgotten Sands will be just too frustrating to get to grips with. The Prince may well have to undergo yet another transformation if the franchise is to continue. Or perhaps well all just have to accept that maybe his time is up.