Prisoners of the Ghostland

For the last five years or so, Nicolas Cage has been churning out an average of five features per year. It’s possibly this extraordinary work rate that has lead to issues as far as quality control is concerned, with many titles being painfully poor.

And yet Cage is still always worth watching. He is an actor unlike any other; he is a performer who somehow transcends the material he’s working with – which is just as well, as his output recently has been decidedly dodgy for the most part – as he delivers characters that only he could play.

He seems content that his days as a Hollywood ‘A’ lister are long behind him, concentrating instead in almost creating a cinematic cliché of who Nic Cage is, and a new oeuvre of work, allowing him to celebrate the bizarre and the absurd.

And this new film certainly fits into his on-going collection of roles and features, with Cage playing an unnamed hero in a curious world. 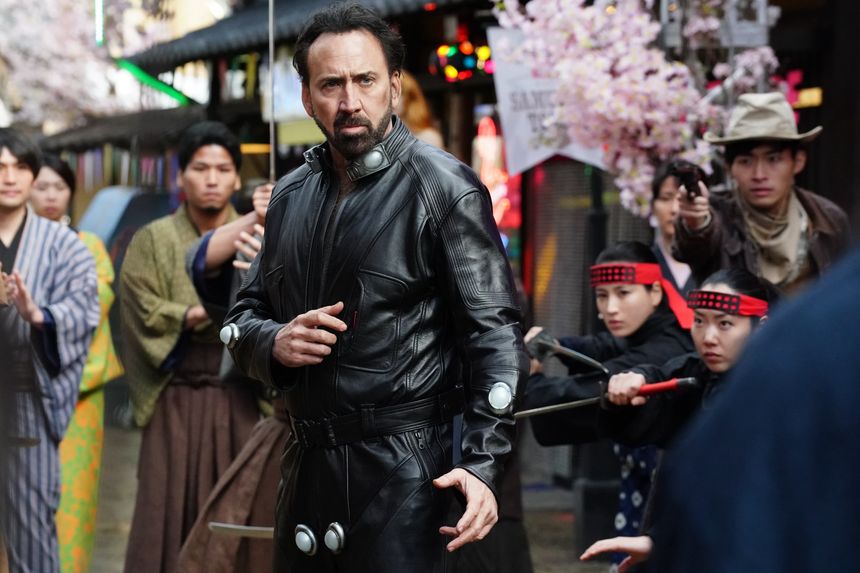 Like I said, if you want my autograph you're gonna have to fight me for it.

Take the look of feudal Japan and mix it with the wild west, and you will have Samurai Town. It’s a destination conceived by the Governor (Bill Moseley), built after a huge amount of nuclear waste was spilled on the land.

When one of his “granddaughters” – whom he’s definitely not related to – Bernice (Sofia Boutella), manages to run away from both him and town, the Governor is keen to see her return. Unfortunately for him, the area outside of Samurai Town, known as the Ghostland, is far from hospitable.

He decides to recruit a criminal known as Hero (Cage), who was caught during a botched bank heist, to help him out. He equips him with a unique bodysuit, that will certainly prevent him from doing anything silly, and a time frame of five days to locate Bernice and bring her back home. And if he fails, well, no more Hero. 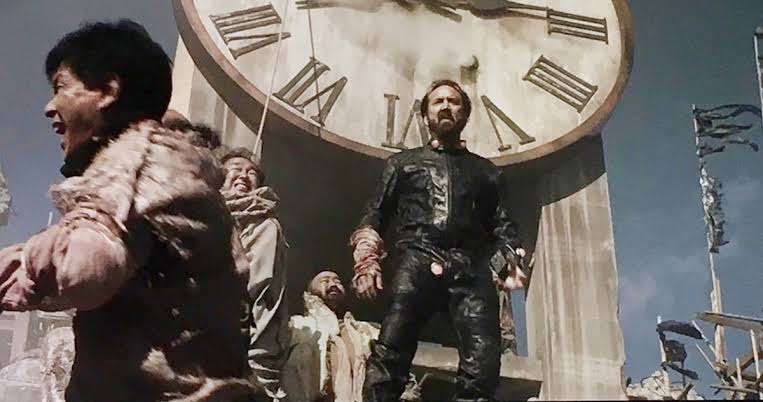 I don't want to wear time, I want time to wear me!

Prisoners of the Ghostland is yet another example of recent work from Cage that sees him open to all kinds of features, because ultimately they will become yet another odd Nic Cage film. But then there’s good odd and there’s bad. This one falls into the former category – just.

The film certainly has a prominent style; it’s a Mad Max-esque scenario as if shot by Terry Gilliam. Yes it’s that surreal. Japanese director Sion Sono throws a lot at it visually, so much so that it can often be quite exhausting taking it all in. Still, it’s quite a treat.

It’s look certainly makes up for the script, which is pure nonsense, so much so that it would leave the likes of David Lynch scratching his head.

Clearly Cage is happy though, as he has a costume to exude his weirdness from comfortably, helping to define that kooky Cage persona that has been present in much of his recent output.

What sets this one aside from those somewhat, is the film’s sense of humour. Some if it is gloriously silly, as the film confidently lets the audience know it’s not taking itself too seriously. Whether Cage is however, is a different matter.

It is equally bonkers and beguiling – as is Cage’s performance itself – and out of what seems like the many hundreds of features that Cage appears to be starring in, this one is definitely worth catching, as it’s certainly a one of kind.