Hindsight is a marvellous thing. Who hasn't wished they knew what the consequences of something were before they did it, in time to prevent them from making a hideous mistake - like when George McFly failed to stand up to bully boy Biff? 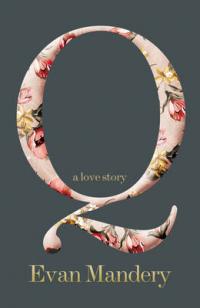 This is essentially the premise of Evan Mandery's clever novel, Q: A Love Story, set in present day New York. Except without the Back to the Future references. The protagonist, a moderately successful youngish academic historian - whose name we don't know - has just published a loosely-based-on-history novel. He meets Q, a mesmerisingly beautiful, smart, green-fingered woman with whom he gets on tremendously well. So begins the love story. So far so run-of-the-mill.

Fast forward a little and our protagonist - let's call him I (for reasons that will become clear later) - and Q are engaged to be married, and wedding preparations are in full swing. They are both blissfully happy until I receives a note, written in his own handwriting, to meet for dinner at a fancy restaurant. When he gets there he encounters his sixty year old self - whom he calls I-60 - who after a little bit of beating about the bush via a series of expensive meals informs I not only that time travel is a widely available luxury in the future, but that he must abandon his relationship with Q in order to prevent the lifetime of misery that he and Q-60 have endured after their son, who isn't yet a twinkle in anybody's eye, dies.

So begins the wonderfully bizarre story of how I attempts to take advantage of the hindsight delivered via a series of visits from future incarnations of himself, advising him to take various kinds of drastic action in order to deter some kind of miserable life trajectory. Hindsight, for I at least, seems to be quite a hindrance, getting in the way of his living his life day by day and finding any joy or surprise in it.

Readers lured by the title to expect yet another slushy bit of chick-lit will instead be greeted with a sharply written, wryly funny, slightly sci-fi tale of love and loss and self-discovery. The gloriously weird premise of this book is likely to appeal to fans of Douglas Adams, Neil Gaiman and Audrey Niefenegger.

Mandery is quite the polymath. He's clearly a talented author of non-fiction; in addition to Q he has published two other novels, Dreaming of Gwen Stefani

and First Contact: Or, It's Later Than You Think

. It doesn't stop there. He has also written a couple of non-fiction titles based on his time as campaign director for Ruth Messinger in her bid to become Mayor of New York City, and has published a critical academic text on the US death penalty linked to his day job as professor of ethics and death penalty law at John Jay College of Criminal Justice in NYC. On top of all this, he has also, apparently, won over 50,000 USD in poker tournaments. It's hard not to be impressed with that kind of CV.

Whilst the concept of Q: A Love Story is both a clever and an engaging one, it takes quite a bit of stamina to get through. It's sluggish in places, especially the bits where Mandery includes long, tedious excerpts of some of the books that his protagonist is writing. There are lots of instances of extreme reflexivity: the unnamed protagonist is an academic with a side line in fiction, as is Mandery; and there are many occasions where the protagonist is critical about his writing and achievements in such a way that it could be Mandery talking, which of course ultimately it is. But this whole reflexivity thing is of course the central theme of the book: the protagonist is his own worst critic, as future selves embody. It's just that in some places this reflexivity works like a dream, but in others is capable of sending you to sleep.

Mandery's characters are fascinating; you're always on I's side, more or less, although the older I's - seen through I's eyes - can be somewhat frightful. It's laugh out loud funny in places, and may prompt a bit of reflection on the part of the reader in a butterfly-flaps-its-wings-and-causes-a-monsoon-on-the-other-side-of-the-world way; what effects might this little (or big) decision I've just made have on the me I turn out to be, and on the life I end up living? There's also the nice underlying theme that it really doesn't help to spend too much time focused on the 'what ifs' and trying to prevent some unwanted outcome or another; just live in the present and make the best of what happens.

Q is a whole new kind of self-help book that will improve anyone's bookshelf. If you take the rough with the smooth then your future self is unlikely to travel back in time to warn you against investing the time in it, and you'll very probably be left eagerly awaiting whatever Mandery has planned in the future.