We certainly live in a new era of Bond. Daniel Craig returns for his second stint as the worlds most famous 007 agent. And once again, he brings his rugged, action man of few words to the screen. This time hes out for revenge for the death of his lover Vesper from Casino Royale. This involves tracking down the men behind the mysterious organisation known as Quantum. But mostly it means that Bond finds himself notching up even more Air Miles, as well as working up a sweat in his smart suit.

Despite the writing talent involved  yes we are mainly talking to you Paul Haggis (Crash, Million Dollar Baby), there really is very little story to be found. Not only does Craig find himself with the minimum of dialogue, what little he does say makes little sense. It would be quite easy for someone to sit through the entire film and miss the references to the guarded quantum group. 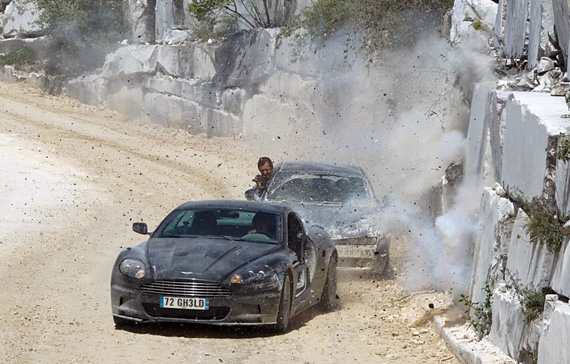 What you couldnt miss however, are the trademark stunts and spectacle of Bond. It must be one of the most difficult jobs in cinema, to be given the responsibility of making any Bond film bigger, bolder and more blowy-uppy than the last. Director Marc Foster though, who it has to be said, doesnt have an action-packed CV (Finding Neverland, The Kite Runner), to his credit, never fails to impress with the set pieces, of which there are many.

Missing once again however, is Bonds sense of humour. Sure, some of the clichéd lines are as tired as an insomniac, but it doesnt mean that Bond (i.e. Craig) couldnt, you know, smile once in a while? The few jollyish lines the film does manage, come by way of the dame-ness that is Judi Dench. To her credit, she delivers these odd dry, deadpan lines with the utmost of style. Now if only Bond could do the same...

French actor Mathieu Amalric (who put in a sublime performance in The Diving Bell And The Butterfly), plays the baddie of the piece - Dominic Greene, with admirable restraint. You have to feel sorry for him though; what must it have been like after the initial high of getting the gig, only to be told that you cant play a proper Bond Baddie. What fun is there in playing a believable Bond villain? Probably about the same amount as watching one. Yawn.

Another omission? The gadgets. There arent any. This has the same level of disappointment as a Batman film not having a Batmobile in it, or a Spiderman flick where Spidey decides to solve crime by web-walking his way around New York.

For many, this new proper Bond may be a step in the right direction, but if theyre not careful, they could easily water down the true essence of Bond; this would make it almost impossible to distinguish him from the Jason Bournes, Ethan Hunts or John Mclanes of this world.

Quantum Of Solace is both bold and breath-taking in equal measures. But lets just hope that the next instalment doesnt take Bonds illustrious past too much for granted.