The planet, as we know it, is fucked. At some point we crossed the line from ‘if’ to ‘when’ without a care in the world. So here we are, kidding ourselves into thinking that recycling that milk carton and flushing after every other piss, will actually make a difference. That ship, containing all our crap being sent off to another land to be buried underground to poison the earth for thousands of years, has most definitely sailed.

Might as well get some gaming in then, shall we?

Rage 2 might offer something by way of help at least. It’s one of a growing number of titles released over the years that are set in an apocalyptic future. But where once upon a time it may have been considered pure science fiction, it’s now edging into more educational territory, in the form of a playable manual on how to survive Armageddon. We won’t of course, but let’s have some fun in the shape of some video gaming role-play.

Earth has inconveniently been hit by an asteroid, thus causing mass mayhem and destruction. You play a ranger, thirty years after the initial impact (and thereby the first game), and it’s left to you, to attempt to pick up the pieces. It’s no easy task however, with mutants now littering the dusty landscape, and a general lawlessness everywhere. 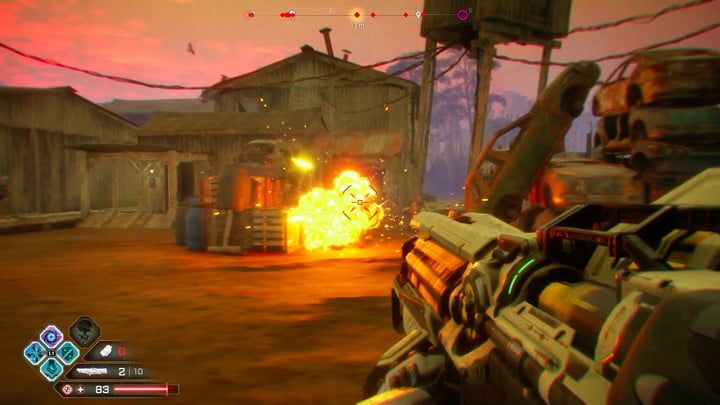 It won’t take you long into this game to realise that there’s a lot going on. Not story-wise exactly, but with what to do and how to go about it. It feels as if the game is suffering from a split personality disorder.

On the one hand, it wants to play like a free-roaming, go anywhere, shoot from the hip, kind of first-person shooter. And on the other, if you can find it in a sub, sub, sub menu, is a convoluted RPG game. To a certain extent, it’s nice that things can be tinkered with, but this game goes overboard in this particular department. Upgrading weapons and items for instance is so convoluted; to do so, you’ll need to unlock this section, and then collect a few of these items, and then you might want to go over there – and then come right back – and do the hokey cokey and then turn around, and then you can have an extended magazine for your rifle.

There’s also a general cack-handedness to the levelling up system. The story mode has a number of strands, with each one having its own levelling up process. So if you do a few missions under one strand, you’re likely to level up further than on others. This wouldn’t be an issue if the game didn’t mark certain missions with a general level rating – a raid on an enemy stronghold, may have a level 5 rating. OK, but with no overall levelling up system, it’s not clear if you’re up to the task or not.

Another disappointment is the overall environ you play in. It’s difficult to see a post-apocalyptic world to look sparkly, but does it have to look so darn grubby? It generally looks like a sand-covered landscape, littered with dull warehouses and bland buildings, with absolute rubbish everywhere. It would be the perfect place for Stig to live, for those old enough to remember. He may well have a small holding in there somewhere, it wouldn’t be a surprise. 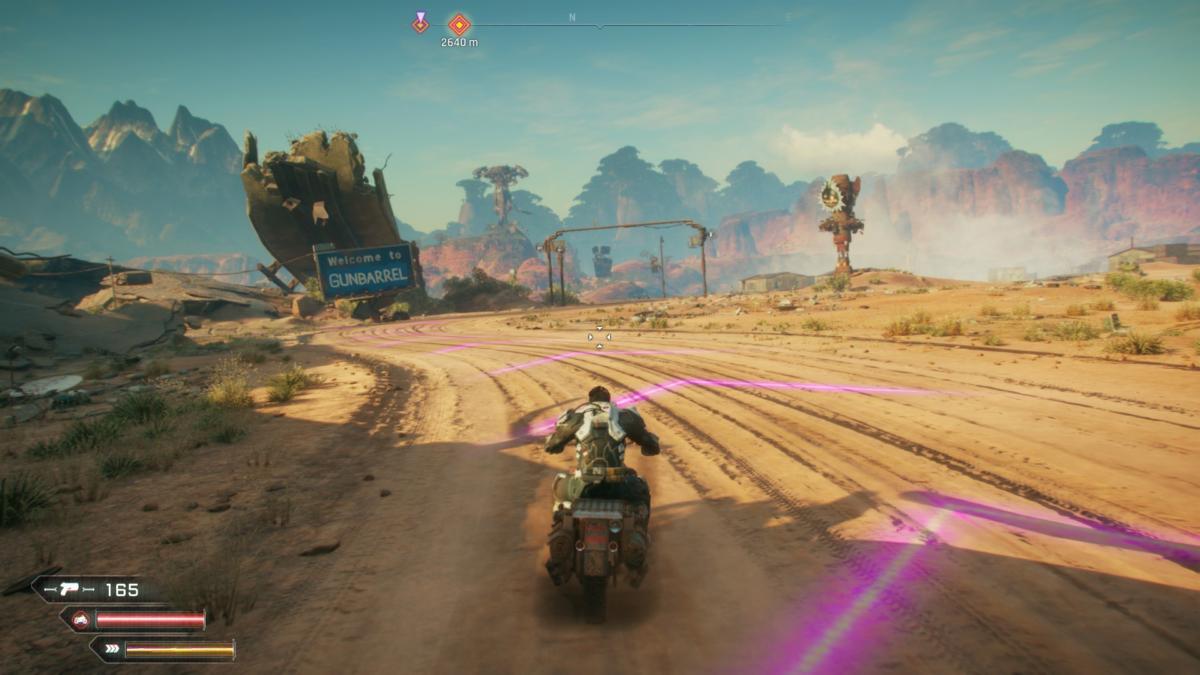 Who wanted to graffiti the roads all the way out here?!

With all this uninspiring filth everywhere, guns should be loaded with the likes of Dettol and Flash instead of bullets. It all feels very generic, with little in the way of originality to it. It’s also hindered by some dreary cut scenes that drag their heels, with some unconvincing face rendering, that makes every character look like a ventriloquist’s dummy whenever they speak.

The controls are a little bit suspect too. Moving around after a while in the world, you may feel a little motion sickness if you’re prone, as we are; it doesn’t help with having to press X to climb ladders, for example, which you have to a fair amount, which goes into a jerky climbing motion. To that end, we could only play in stints of 20 minutes or so.

Strip it all back however, and there’s a fairly decent shooter lurking in the background. Weapons, once you’ve figured out how to upgrade them, can let off a satisfying ‘boom’, with a pleasing variety of enemies with differing abilities, to overcome. Some of the more restrictive battles however, where you enter an area in a basement or similar underground space, feel at odds with the rest of the game, giving them a certain Doom feel about them. But these are thankfully fairly sporadic, so don’t dampen the overall gaming objectives.

If you’re looking for a unique and original gaming experience, then there’s nothing to see here that you haven’t seen or, more crucially, played before.

But if roaming a Mad Max-esque world, a-looting and a-shooting to your heart’s content is your thang, then this is the game to get your rage on.