Raya and the Last Dragon

If there’s one area of film production that can still work through a global pandemic safely its animation. With all the animation now produced with computers, there have no doubt been a swarm of animators, working from home, helping to produce the 59th feature from the Walt Disney Animation Studios.

And you have to hand it to them, Raya and the Last Dragon is an impressive piece of homework indeed, visually at least. 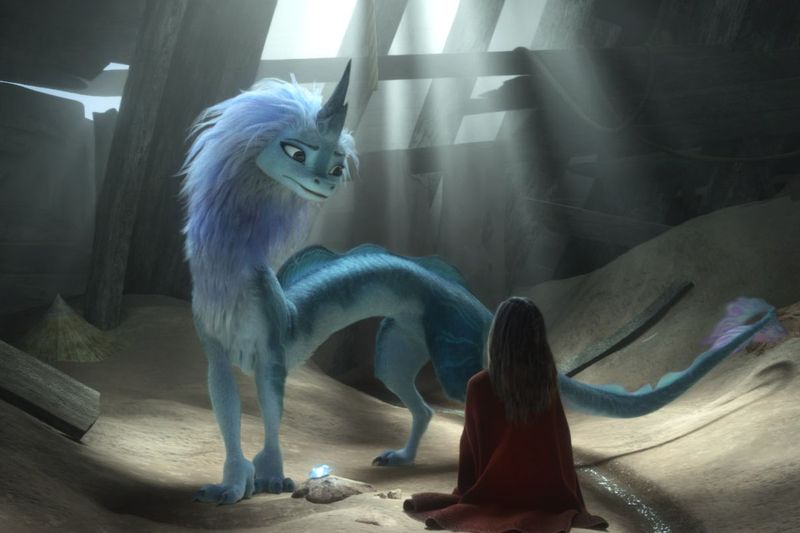 I know it's a minimalist look, but I think it works.

For the last six years, Raya (Kelly Marie Tran) has been on a quest to find the last dragon, after being tricked into releasing the evil Drunn across the land. With the Drunn once again unleashed, it can turn any human it comes into contact with into stone.

There is an orb that can reverse the damage, but it was broken into pieces and taken by various leaders. Raya is banking on a myth being true, of one surviving dragon having the power to unite the pieces of the orb and then send the Drunn back from where it came. But for Raya to succeed, she has to track down all the pieces of the orb, as well as the small matter of locating the mythical beast, if she’s to have any chance of bringing life back to her land.

Oh all seeing and powerful Disney, please forgive our sins...

Although the Walt Disney Animation Studios have been responsible for a golden age of animated cinema, the output in recent years has proven that not every Disney release is a guaranteed classic, as this film amply illustrates.

It should be said that all of those animators working from home - if indeed they had to work from home – did a truly remarkable job. The animation is simply stunning and could be considered a work of art. And if you’re a fan of natural looking hair, you will be in your element; Raya’s hair in particular should have its own spin-off feature as there’s certainly more life in it than the film’s script.

Considering how well written many of the previous Disney films have been, it’s a huge disappointment that this one was such a struggle. And you don’t have to take our word for it, as there’s a definite clue in the film’s credits when eight writers are listed with a story credit. That’s right, eight individuals came up with a lame adventure plot, stealing elements from the likes of Star Wars and Raiders of the Lost Ark, that wouldn’t look out of place in a dodgy video game.

It’s a plot that is both pedestrian and predictable, that could have been overlooked if there were larger than life characters to elevate proceedings, but sadly that’s not the case. Although it’s highly commendable that many of the main characters are female, it’s clear that the only two women part of the eight-strong writing crew didn’t get much of a look in when it came to character development, as they all lack personality. In fact the only characters that do are the fairly generic supporting creature characters, that could have been cut and pasted from any other recent Disney animation.

The only exception to this, rather ironically, is the last dragon herself, Sisu, voiced by Awkwafina. It’s a role that should have been up there with the Genie from Aladdin, offering sparkly dialogue and quick-witted humour, but it’s just not in the same league. The result is a rather flat relationship between Raya and the dragon, with what should have been the beating heart of the film.

It’s not helped by its animated presence either, looking more like an anorexic unicorn than a mythical dragon. You can call us old fashioned, but if a dragon doesn’t have wings, it has no place even calling itself a dragon. You get the sense the animators themselves felt this embarrassment, as they actually present it in human form for a period in the film, undoubtedly so we saw less of the monstrosity.

Perhaps the expectation around an animated Disney release shouldn’t be as high as it once was. And although the animation used here is of an extraordinarily high quality, Raya and the Last Dragon is a long way off from being classic Disney, with personality and humour being as rare as the mythical beasts featured.