It would be completely understandable for Rayman to feel more than a bit miffed. He floated, quite literally, onto the gaming scene in 1995, in his first 2D side-scrolling adventure. As characters go, he was never in the same league as Mario or Sonic, but he still managed to hold his own.

In 2006 however, he fell in with a bad crowd: Rabbids. His name may well have been on the box, but Rayman Raving Rabbids was all about the bunny-eared buffoons that stole the limelight. His limelight.

Soon after he found that his phone stopped ringing, and all of a sudden those pesky rabbids were turning up left, right and centre on all manner of consoles.

Rumours of Rayman turning to hard drugs were never fully proved, but he clearly reached a new low. But like many who've hit rock bottom, Rayman has found the strength to bounce back.

Rayman Origins turns its back on all the current next gen mod cons and goes about its business in a pure old school fashion.

As the name suggests, this sees the titular character returning to his 2D side-scrolling roots. He starts off at the left of the screening, and has to travel all the way to the right until he reaches his goal. It sounds simple enough, and yet it manages to provide a tough test for any gamer. So tough towards the end that you should be prepared to have clumps of your hair in your hands from pulling it out.

Some journeys however are worth it, however treacherous the road gets. 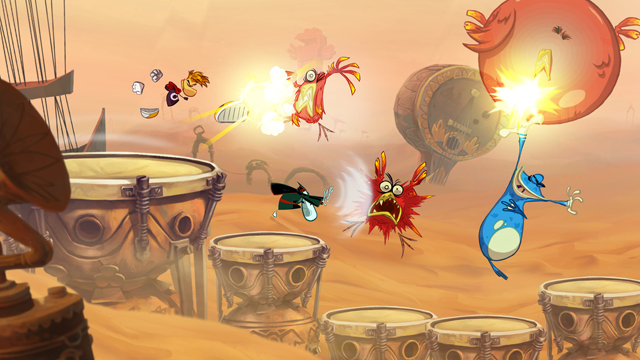 I can't help but be hyperactive after a party pack of Um Bongo!

Rayman's world has always been colourful, but having a high definition palette on screen makes everything really crisp and vibrant. There are many different environs that he finds himself travelling through, each with their unique look, feel and obstacles. Sometimes though, it's difficult to actually appreciate how pretty everything is, as you'll often find yourself travelling through it at breakneck speed. Don't worry however, as you're bound to die  a lot  so you'll soon become very familiar with the world around you.

Obviously no-one likes dying in a game, but you soon just accept this fact. Most sections are bite-sized in chunks though, making it slightly more bearable. Towards the end however, as you attempt to take on the game's summit, more save points would have been appreciated. With most levels broken into three sections, and each section containing a hidden area that contains imprisoned Electoons, the game will only save once you've travelled through all three sections. And the closer you get to finishing the game, the longer it will take to complete some of its tougher levels. The final level alone could take you well into double figures to complete it. We lost count after fifty attempts.

Once you have finished the final level, don't be surprised to feel a slight pang of disappointment, as it won't necessarily mean that you have finished the game. If you haven't collected enough Electoons, you won't have access to every level. So if you want to be a completist, you'll have to play through earlier levels in an attempt to collect even more of them to open them up.

But you don't have to do it alone however. The game can be played in co-op mode with up to four players in total; obviously the more players you have on screen at any given time, the more hectic the game play becomes for all concerned.

At times the game takes on a feel of almost Olympiad proportions. Rayman runs, leaps, swings, punches, ducks and swims, as well as his trademarked ability to glide in the air with his ears. Each of these motions, including various combos, will certainly keep you on your toes and keep game play interesting. What's more, there are a number of flying sections, which finds Rayman sitting pretty upon a deadly mosquito, in a classic side-screen shooter mode. Throw in a considerable amount of boss battles and Rayman: Origins is certifiably old school.

With so much running, jumping, swimming etc to be done, it would have helped if the controller felt more responsive in places. Far too regularly it can feel like your wrestling with it just to get the right response. It needed to be a whole light tighter, because there are many times, particularly the chasing sections, where timing is everything. That said, it's certainly not bad enough to prevent you playing this game.

To date, the sales of this game have been pretty poor. It could be just a simple fact of getting lost in the gaming mayhem that was November. Any other month and this game would have had a good chance to get the large audience it clearly deserves.

The kind of love that the developers of this game have poured into this title is usually reserved for a title like Mario. Yes it's wall-punchingly difficult in places, but there's a great sense of achievement once you've managed to beat it.

Not only is it one of the most impressive looking games in quite some time, it also goes to prove that there's still plenty of life in the old 2D dog yet.